We all know that the FOMC meets on September 20 and September 21 to play the “to raise or not to raise interest rates” game. And there are a lot of officials at odds about it.

Boston Fed President, Eric Rosengren, has already made it crystal clear that he wants a rate hike – and soon – while others, like Fed Governor, Lael Brainard, disagree.

And on Monday, Brainard gave a speech stating that the case for raising rates is less compelling, citing concerns over the effects slowing global economies (such as China) could have on the U.S. economy.

But in the end, I’m going to be watching something completely different.

These three industries stand to gain the most.

Why Bankers, Brokers, and Insurance Agents Say “Yes” to a Fed Rate Hike

There aren’t a lot of industries out there that would benefit from higher interest rates.

But these three do…

The banks have gotten a lot of attention from the press lately – and for all the wrong reasons. That said, in this environment of low interest rates, the banking industry is limited in what it can charge on loans. The net interest margin (which is the difference in what they charge on loans and earn on other investments) has declined a considerable amount.

But this changes if the Fed raises rates. When interest rates are higher, every bank in the industry will have the ability to charge more on the loans they issue.

And a good bank stock to watch if  and when rates are raised is Bank of America Corporation (NYSE: BAC).

Now it may have missed on the earnings per share number in its last report, but BAC’s reported revenue was much higher than estimates – by almost $2.5 billion. And if interest rates are raised by just 1%, both in the short term and long term, BAC projects an extra $4.6 billion added to its annual net income. 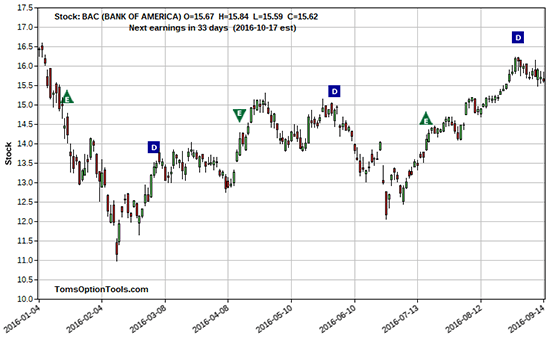 The chart above shows the price movement of the stock since January 4th. And although it’s had some dips, BAC has shown an upward trend since March.

And of all the brokerage firms out there, I see The Charles Schwab Corporation (NYSE: SCHW) benefiting the most. 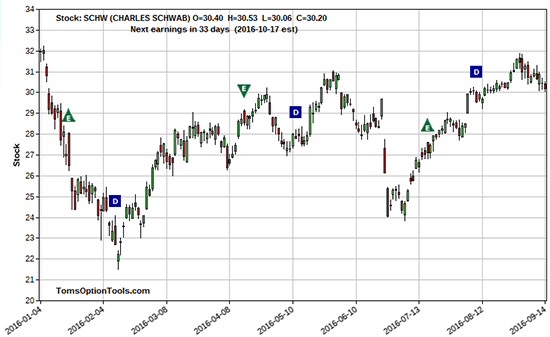 Aside from bringing in more interest income from higher rates, SHW has been waiving certain fees to help garner positive returns for its clients. And a rise in rates could make this returns soar.

Most people hate insurance companies. But here’s why it’s an important industry to watch if the Fed raises rates…

Insurance companies tend to hold a lot of bonds as a way to back or secure the capital requirements on the policies they write. Now in a low-rate environment, these bonds yield really small returns. But if interest rates are raised, these yields of these bonds should go higher, too. And this will make the insurance industry a lot more money.

The other to consider is that the decision for the Fed to raise rates actually indicates a strengthening economy. In a strong economy, the consumer sentiment also tends to strengthen as people typically have more money to spend on things like cars and homes. And more cars and homes means more insurance policies.

So a stock to watch that I like quite a bit is Aflac Incorporated (NYSE: AFL).

This stock has done well despite this low-rate climate, which you can see below in its price movements this year. And even though it’s been stuck in a sideways trading range since mid-July, just like the markets, it hasn’t seen the technical breakdown of its key support (around $72) like the major indices have. 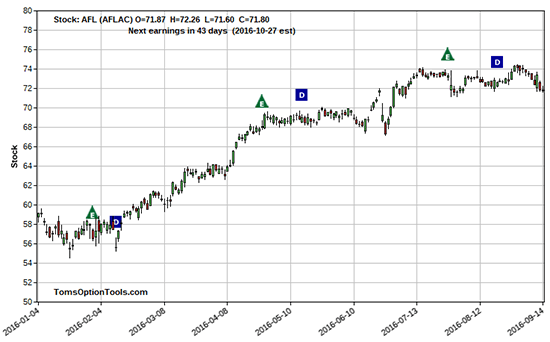 The other thing about AFL is that it holds onto its money longer than other insurers. Remember… this is a supplemental insurance provider, so it really only comes to your aid when the others don’t.

Bad News Could Be Good News In Disguise

While most industries, except the three above, deem an interest rate hike bad news, keep in mind that it may not actually be bad.

Although it’s very possible that the markets will drop if the Fed raises rates, it could prove to be favorable for bonds. As bond prices go up when yields go down, the prices of any bonds you may have in your portfolio now coulddrop, and the yields could rise, after a Fed rate hike.

And the other thing you’ll want to keep in mind is that the Fed raises rates when the economy is considered to be stronger. That’s why there’s been so much flip-flopping about it. With each new jobs, manufacturing, and retail sales report, the Fed has to look at whether or not the results mean a strengthening or weaking economy.

So even though a Fed rate hike may seem like bad news, it just might not be…

We’ll just have to wait and see.