Amidst all the Fed commotion, you may have missed something pretty major that happened to a pretty major sector…

Prior to the FOMC meeting, gold had hit a two-week trading slump. But shortly after the announcement, it broke through several “resistance” levels, including the so-called “38.2” line, and posted the largest gains in the past two weeks.

Now we’ve talked about resistance lines before. But what you may not know is that everything you trade – gold, oil, stocks, bonds, even currencies – follows the same “rule” involving that line.

This rule can tell you when a pullback is forming in the markets.

It can tell you the percentage amount the markets will move.

It can even tell you how long that pullback will last.

These Three Fibonacci Retracement Ratios Signal a Turn in the Markets

Back in the late 13th century, an Italian mathematician named Leonardo Pisano (better known as Leonardo Fibonacci) founded a unique sequence of numbers that can be found all throughout nature.

This sequence, called the Fibonacci sequence, can be found everywhere in nature. From tree branches to honey bees, it’s there. It even exists in the human body, with one example found in the relationship of the distance from the shoulder to the elbow and the elbow to the fingertips. And this sequence can be found within architecture and art, like in the ancient pyramids.

But technical analysts, (often equity and forex swing traders) love it because it can be used to make money in the markets – no matter what you’re trading and what your time horizon is.

Even more impressive is that each number is about 1.618 times greater than the preceding number.  And the relationship between all these numbers in the sequence is the foundation of common ratios when studying retracements (the percentage by which the market corrects itself).

Anything you trade (whether it’s stocks, bonds, commodities, futures, or currencies) tends to pull back to these percentage retracement levels before resuming the overall trend either up or down, which is exactly why technical analysts love the Fibonacci sequence. It’s easy to spot – and trade – trend reversals right down to the decimal.

How to Spot Fibonacci Retracements on a Stock Chart

On Wednesday, we talked about Apple, Inc. (NASDAQ: AAPL), and I actually showed you a couple of Fibonacci charts to exemplify my point about AAPL retracing to its somewhat parabolic move last week.

So let’s take a look at a longer view to see Fibonacci at work. My analysis tools include a feature that draws in the Fibonacci levels automatically over a specified date range, so you can easily see these levels below: 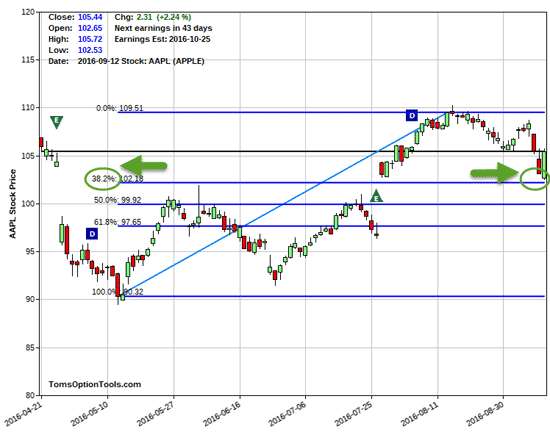 Here, you can track the Fibonacci retracements by running the stock’s price movements from peak to trough (two extremes) and calculate the ratios. Then, you can plot them on the chart to assess which ratio would be support or resistance points.


In the chart above, you can see the trend from the $90 and $110 levels, so the Fibonacci retracement uses those points.  Prior to last week’s surge higher, the retracement came in right around the 38.2% line (where you see the stock’s daily upward move off that retracement level).

As you know the release of Apple’s iPhone 7 and 7 Plus drove interest in the stock and moved it higher. But most of the time, it’s absolutely uncanny how news can push stocks right around Fibonacci levels.

And you can see in the chart below just how AAPL moved off that Fibonacci level to $115  following the iPhone craze before settling back down a bit: 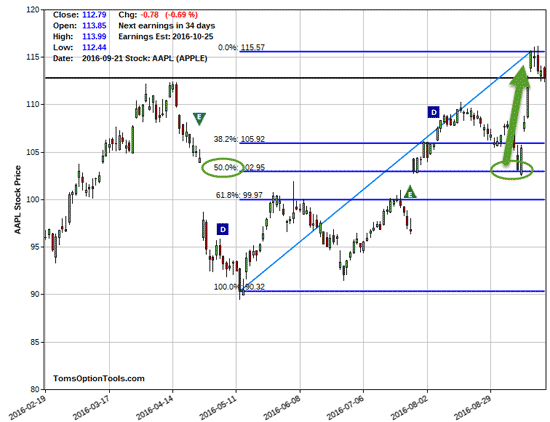 What I find particularly interesting is that if AAPL performs a 50% retracement on this longer-term view, the 50% retracement takes the stock back to where it launched on September 12, 2016, which is that 38.2% level on the chart above.

In this next chart, I’ve drawn in for you the percentage retracement levels on AAPL with the correlating prices. So if you want to look at the stock’s price move last week to spot a potential pullback or reversal in this trend, you can follow the retracement levels in this chart. 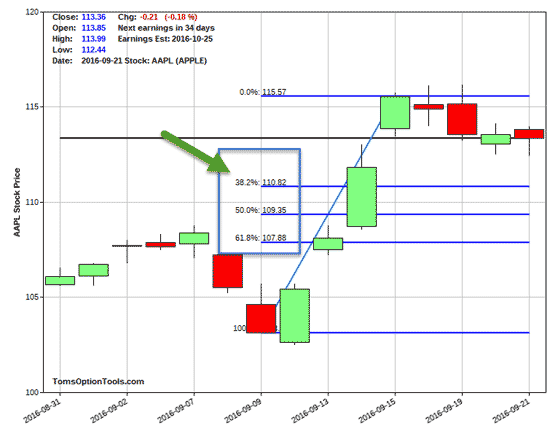 Now APPL could bounce before it hits any of these retracement levels… But if it doesn’t, then you should look for that jump higher and use the retracements to set your stop prices – and cash in on the stock.

And the best part is… Fibonacci retracements work for anything you trade.