When following the news over these past several weeks, you’d think that Apple and Samsung are the only companies out there making cell phones.

But before the iPhone and Galaxy Note 7 rolled out, there was another provider dominating the smartphone world that’s not quite “dead” yet…

Now I know what you’re probably thinking… but hang on a second.

Yes, they’re losing money year after year. And you probably haven’t seen anyone using a BlackBerry in a long time.

But they’re establishing a new identity, with a new source of revenue.

And whether or not they succeed depends on this one number…

Last November, BlackBerry, Inc. (NASDAQ: BBRY) CEO, John Chen, said that BlackBerry would stop designing and developing its own smartphones if it couldn’t sell between 3 and 5 million phones to break even. But in the first half of this year alone, it’s only sold about 900,000 phones.  So, standing by his word, Chen announced on September 28th that BlackBerry is finally done designing and building its own phones.

Now Chen is working his tail off, I imagine, to re-create BlackBerry’s identity from smartphone provider to software servicer. And while discontinuing its hardware sales may result in losses in the short term, you do also want to consider the fact that it no longer faces losses from inventory write-offs. But it’s just too early to tell if this will help or hurt BlackBerry (even more) over the long haul.

So the question right now is… do you buy the stock, sell the stock, or stay away from it altogether? 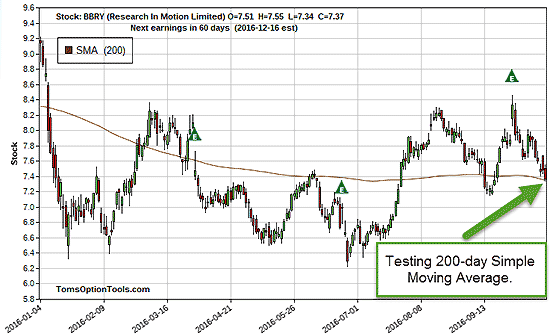 From a technical stance, the only positive thing I see here is that it’s now nestling on top of its 200-day SMA. And there’s just two directions it can go from here that will tell you whether or not BBRY is worth your time and your money:


The (Much) Less “Risky” Stock to Put Your Money On

Even if BBRY presents some enticing profit opportunities, there’s no doubt that the number of “ifs” surrounding the company could be off-putting to you. So if you’re looking for another provider (NOT named Apple or Samsung) to put your money on, consider Alphabet, Inc. (NASDAQ: GOOGL).

Thanks, in part, to Samsung’s exploding phones, Google’s been hungry to take over the title of the Apple’s “number one contender.” And with the successful new release of the Google Pixel phone, they’re ramping up the advertising and marketing – which could bode extremely well for them this holiday season. 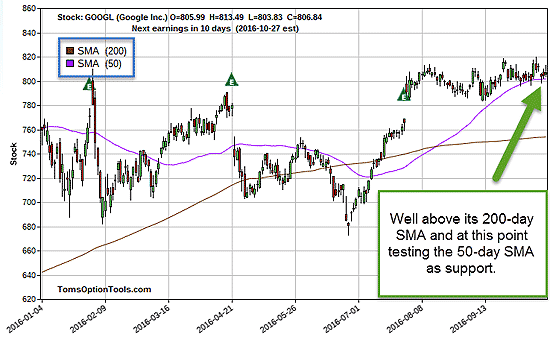 Right now, the stock is well over its 200-day SMA, which speaks highly of the bullish direction the stock looks to be heading.

Keep in mind, though, that GOOGL is one of the more expensive stocks out there. And right now, it’s trading at $826.58. So if you don’t want to spend nearly $1,000 of your hard-earned cash on one, single share of GOOGL, options could be your best answer. Options will let you essentially “rent” 100 shares of the stock so that you can participate in its profits without that hefty cost.

And while I’m not recommending a specific trade on GOOGL, Long-term Equity AnticiPation Securities (LEAPS) or spread trades with December or January expirations could offer you the most bang for your buck.