After the Dow failed to hit the 20,000 mark yesterday, the TV news pundits went crazy.

In a matter of minutes, one station was calling for a huge stock market correction while another not only dismissed it – but said a correction was impossible next year.

Clearly, these talking heads don’t actually know if – or when – the markets will turn.

But there are two very distinct “lines” that do know…

These lines will tell you how strong this market rally is, how much longer it can hold up, and exactly when to get in and out of your trades…

Before the rest of the crowd.

How the MACD Will Tell You When a Trend is Reversing

The “Moving Average Convergence Divergence,” or MACD (pronounced Mac-D), is a popular momentum indicator that traders use to measure strength and duration of a trend.

Many refer to it as the trend-following momentum indicator, but it can also be used to signal a possible end to a trend and a reversal in the underlying price. Those signals are where you can use this indicator to your advantage to get in and out of your trades ahead of the trend.

But before I show you, let me give you a brief explanation of how the MACD is formed, and how it can show the strength or lack of strength of a trend.

The MACD has two lines plotted on the chart. The first line is the “MACD line.” It’s formed by subtracting the 26-period Exponential Moving Average (EMA) from the 12-period EMA.

The 12-, 26-, and nine-period numbers are the typical default of software programs when plotting the MACD. It can be shortened or lengthened to your liking, but this is the standard across the board.

Take a look below…

Crossing over the “Zero line”

Just after the sideways consolidation in price in the charts above, the 12-day EMA crossed below the 26-day EMA, and the MACD line crossed below the zero line. It took a day or two more for the signal line to follow suit.

See what I mean by wanting to be in a bit sooner? You can get into (or out of) your trades a day or two early, before the Signal line crosses the Zero line and the trend or reversal is confirmed.

Toward the end of the chart, you see the 12-day EMA create a bullish cross of the 26-day EMA, which accounts for the MACD line crossing above the zero line, with the signal line following suit a day or two later. Notice the MACD/signal line crossover and when it happened compared to the EMA crossover.

Another way a lot of traders (myself included) look to get into trades sooner on a possible reversal is to trade the crossover of the signal line BY the MACD line.

This crossover happens sooner than the EMA crossover, likely due to the fact that moving averages are lagging indicators.

Let me point out here that in neither case am I stating that these crossovers will happen on absolute tops or bottoms. The crossovers may be off by a few days or more, but they do signify a reflection of the strength of current trend, and give the indication that a possible reversal of the trend may come about.

One technical setup with the MACD I find very intriguing (when it works) is “positive” or negative divergence.”

This happens when the crossover in the MACD works counter to the trend of price in the underlying. 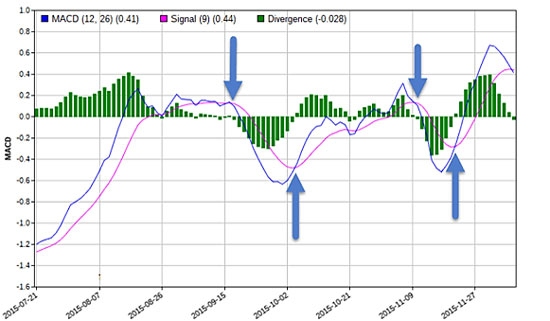 When the MACD makes a higher low at the time the price of the underlying makes a lower low, this indicates the undercurrents of momentum could be building and putting in a bottom in price that propels the underlying price higher.

Notice in the images above the lower low in price on the actual stock chart. At the same time in the MACD chart, you will see it making a higher low on its MACD/signal line cross.

This shows a divergence in price – prices were heading lower while momentum was gaining to the upside. Of course, this is only potential upside momentum until it’s actually confirmed, which you can see did happen in mid-November.

You can find MACD signals and crossovers by having the technical indicator on your screen and scrolling through thousands of charts, or simply choose to look at just a select basket of stocks and watch for these MACD/Signal line crossovers.

MACD can be used for your entry and or signal on your trades. The basics I have explained here can be used for, (and there are traders out there who do this), entry and exits of their trades. You can use MACD to initiate bullish trades on bullish signals/crosses, and plan to exit that position on a bearish signal or cross… and vice versa.

There is a drawback – MACD won’t tell you how far a stock can move, nor will it tell you the timeframe of your trade.

Those are some of the key things we look for as options traders – how much and by when?

So consider MACD and its signals as an accompanying or supporting indicator rather than the sole technical means for your trades.

And one last thing…

Many brokerages and online trading platforms have these tools available to customers. So check with your broker to see if you can take advantage of these great tools.

Here is your trading lesson summary:

Moving Average Convergence Divergence, or MACD (pronounced Mac-D) is a popular momentum indicator that traders use to measure strength and duration of the trend. But you can also use it to get ahead of the trend when it signals a reversal…

To your continued trading succs…