On Monday, analysts downgraded Alphabet Inc. (GOOGL) from a “buy” to a “hold” following the YouTube ad placement controversy. And with an evergrowing list of major marketing companies joining the boycott against the leader of U.S. digital ad revenues – it’s no surprise that investors are worried right now.

But here’s the thing…

Google’s not the only advertising stock out there to put your money on. Quite the opposite, actually…

There’s another stock that’s been flying under investors’ radars, so to speak…

U.S. digital advertising is currently a $40.9 billion industry, with analysts projecting more than double the revenue – $83 billion – this year. That’s why the current controversy Google is facing seems to be – on the surface – a devastating blow to the market.

But as I said above, Google’s not the only advertising stock out there.

Although it’s still a “baby” in the industry, its future is very promising. In fact, just this week, the company announced their expanded partnership with IBM for the creation of a new capability, “Brand Moments,” which will integrate IBM Watson Discovery technology to detect brand sentiment in online news as a means to inform consumer purchase decisions. It’s AI, (artificial intelligence), software accomplishes a great deal for their clients.

Now the last four earnings reports have been less than stellar for FUEL – but the stock has already gained 134.29% in the last 12 weeks, with a one-year return of 28.49%. Furthermore, it’s expected to grow 921.86% in revenue over the next five years. 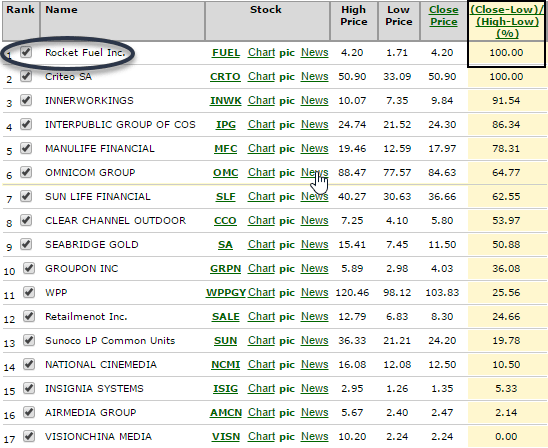 Above is a list of advertising companies currently at their 52-week highs, which I compiled using my proprietary tools. As you can see, FUEL holds the number one spot (notice that GOOGL isn’t even on the list).


It may not have that long of a tenure in the game and isn’t trading as high, per share, as other advertising companies, but it’s certainly on the rise and could become the leading challenger to advertising veterans. Just take a look at the stock’s momentum… 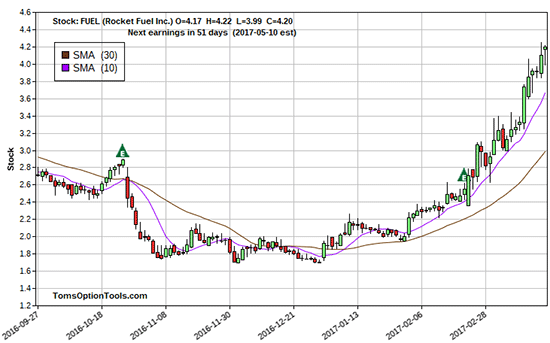 Thanks to it’s $4.20 share price, it’s not quite a wallet buster – but you could also play FUEL by using Longterm AnticiPation Securities (LEAPS). You could also use a calendar spread as way to leverage your dollars.

And of course, talk to your broker, Certified Public Accountant (CPA), or financial professional about the suitability for your portfolio.