And now, some analysts are actually suggesting that it’s the perfect buying opportunity – despite three of SNAP’s executives selling off nearly $10 million worth of the stock on Monday.

But before you go loading up on “cheap” shares…

Here’s what my tools are saying could happen in four months.

Fast forward to now, and its share price has been cut in half -trading at $12.48 as of the time of writing… 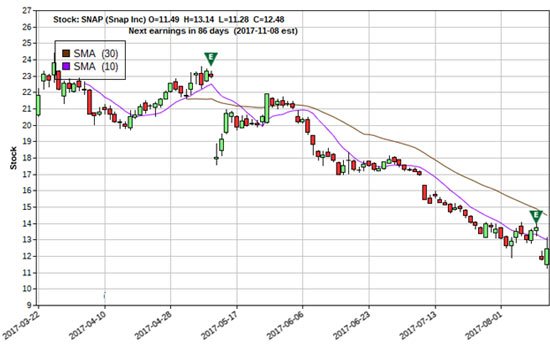 From a charting point of view, the stock’s been testing its 10-day Simple Moving Average (SMA) as resistance since June, sliding lower every time it gets to or near it.

After missing second-quarter earnings expectations on August 10, SNAP dropped to an all-time low, closing at $11.83. The company posted a loss of $0.36 per share on a revenue of $181.7 million (the consensus estimate was for a loss of $0.14 on a revenue of $187 million). Now keep in mind that these numbers are better than in the first quarter – with revenue up 135% and a 21% increase in daily active users on a year over year basis. But the fact that they missed expectations again this quarter rocked the stock – driving it down nearly 10.5%.

Remember… this company went public only six months ago.

Now some of the analysts who’ve been following this stock have been steadily lowering expectations, targeting future prices as low as $13.50 to even $12.00 per share. But others, as I mentioned above, are still bullish.

And I couldn’t disagree more…

In fact, I see SNAP plummeting as low as $5.00 within the next four months – and these are the two catalysts for a declining share price:

So as far as all those bullish predictions on the stock… not for this kid. I wouldn’t even consider spending any money on it right now – not until their future prospects and future earnings potential improve.

If you do feel inclined to put some money into SNAP options, I’d consider buying puts with expirations under 60 months or possibly even Long-term Anticipation Securities (LEAPs), which would give you time to capture even more profits on a longer-term decline in the stock.

Two Ways to Make Money if You Already Own SNAP

Whether SNAP is a holding you and your financial professional decide is worthing haning onto, there are two things you can consider doing with your SNAP to bring in some capital on it:

“Writing” a call is the same thing as selling a call option, which would give the markets the right to buy the stock from you at a specific strike price on or before a certain expiration date. You bring in capital through the premium of the option you sold (times 100 for every contract sold).

Keep in mind that you have put your stock up for sale, which means it’s not guaranteed to be bought or “called away” from you – but the very real possibility is there. The caution here is to never write a covered call if you don’t actually want to sell your stock because you may end up doing so – and at a potentially lower price than you paid for it.

This is not to be mistaken for a cash flow-type strategy. It’s a way to protect your portfolio against further downside price decline. You can consider buying a slightly in-the-money (ITM) or at-the-money, (ATM) strike for however far out you like, say six months. If SNAP is trading at $12.48 right now, then consider a six-month out $12.50 or $13.00 put (anything longer or shorter than that is your decision, of course).

In short, SNAP has its work cut out for itself. That’s why going long puts on the stock is a much better way to play it instead of trying to pick a bottom in the stock.

If you decide to keep it in your portfolio for the long haul, I admire your conviction and wish you the best. And if you aren’t opposed to selling your position and want to make some money off it instead of selling at an outright loss – you’ve now got two ways to do just that.