The number one question you ask me is this: “what’s the best stock to buy right now?”

Now, I’ve trained 300,000 people all over the world how to trade options. I ran the world’s largest options training company, and appeared on several radio shows.

No matter what medium I trained people in, no matter where in the world I was, that’s what people always asked me. I heard it everywhere.

With thousands of stocks to choose from, it’s hard to know where to start or where to look… it’s like trying to find the proverbial needle in the haystack.

Let me show you how to do just that…

Now, searching for that single stock – that needle in the haystack – that you should buy can be a daunting task.

So instead, let’s remove some of that stress by finding a group of stocks that run together.  Rather than relying on the ups and downs of one stock, trading a whole group will let you profit even if one of the stocks isn’t doing too well.

I call this trading the haystack, not the needle.

The most practical way to do that is to buy index ETFs – exchange-traded funds that track market indices like the Dow or the S&P 500.

When one of the stocks in an ETF like that releases a bad earnings report, or is the subject of some negative news, that one stock may get hit and hit hard.

But the ETF won’t drop nearly as much, if at all, because the other stocks in the fund will hold the overall ETF up.

Of course, that also works in reverse – the ETF won’t double when any given stock in it does. But the strength of the ETF over any one stock is the key.

To find the best haystack to buy, I used my proprietary tools to find the highest-performing ETFs over the last 52 weeks:

The top three consist of a financial ETF and two others in the small-cap space. Small-caps, by the way, are companies whose market value is between $300 million and $2 billion.


Of those three in the list, the one I like the most is Direxion Daily Financial Bull 3X ETF (FAS).

This ETF tracks the performance of large, publicly traded financial services companies – and moves three times as fast as the index it tracks.

FAS broke out to a 52-week high in the past week, tested that old resistance level, and for now has bounced higher off of it as a new support: 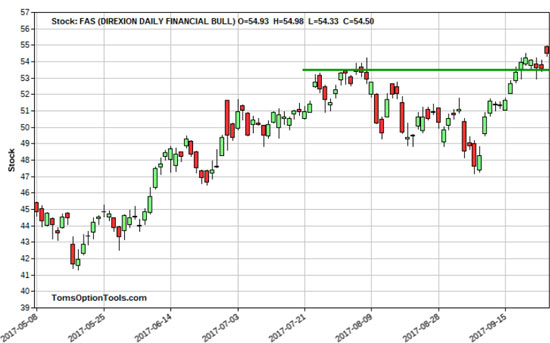 Now, I’d still monitor this, because the ETF is still trading close to that old high, and could go back down.

And for FAS, the spread between the bid and the ask is much tighter than for the two small-cap ETFs.

Finally, there’s still a strong chance we’ll get one more interest rate hike from the Fed by the end of the year.

That’s favorable for banks and others in the finance industry, which is another reason why I like Direxion Daily Financial Bull 3X ETF.

Even better, the Fed predicts at least three more interest rate hikes in 2018.

That’s why this is the best haystack to buy right now.

7 Responses to “The Best ETF to Buy Right Now”