Earnings season is upon us once again. And that means it’s the perfect opportunity to make some fast cash.

Now technology has dominated the markets as the best performing sector so far this year. But it’s not the sector I’m looking at for the fall.

And while the talking heads are betting on technology…

There’s a much bigger play in the works.

Why You Should Focus on the Financial Sector

Every earnings season brings up the same set of concerns or confirms the same old concerns for publicly traded companies and the investors that own shares of those stocks.

The U.S. financial sector is going to have another strong earnings season this coming quarter. The Financial Select Sector SPDR ETF (XLF) chart below shows how well the financial sector has performed this year. 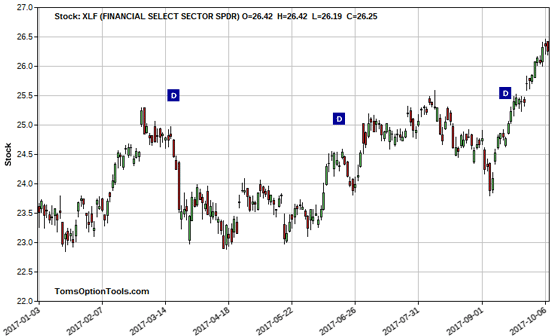 It is at – or just slightly off – its yearly high.


Now this doesn’t mean it is the best performing sector thus far this year. Over the past quarter, technology has dominated the market, but the financial sector will be one of the biggest leaders this fall.

Now one could speculate that it’s due to better than expected earnings. But it’s actually due to the fact that we have seen higher interest rates. Couple that with more rate hikes anticipated to come (the next one most likely to happen in December) and it will adjust future earnings for banks and broker dealers.

People tend to think that equities drop in value when interest rates rise.

But that isn’t the case.

Assuming you’re a company whose earnings come from interest and interest received on short sales, (something you have sold and have cash for), then when interest rates rise, you stand to make more money on cash on deposit. It’s not something a lot of people think about when investing in the stock market.

Now the best stock to watch in the financial sector right now is Morgan Stanley (MS).

Here are the three reasons why: 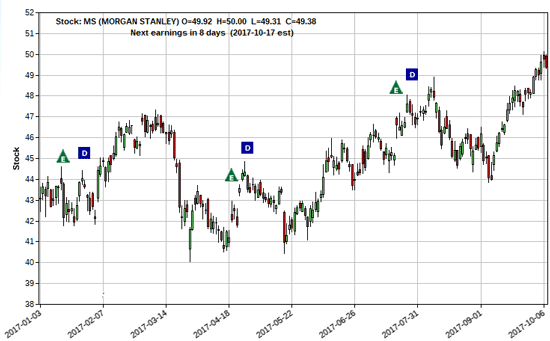 Looking back on the same quarter for the last 10 years, MS has moved higher during this time frame in nine out of the last 10 years by about 5%. That means the perception alone may push the stock higher into earnings, which are scheduled for October 17 before the market opens.

Now my proprietary tools give me a different view of the markets.

I ran a look at MS‘s last 10 earnings reports and could see that their actual earnings came in higher than or equal to the estimate, nine out of the last 10 times.

Now during this earnings season, there will be many other companies in a vast array of different sectors that will meet, miss, or beat expectations.

And we’ll deal with those as they come.

But my focus is on the financial sector and on Morgan Stanley (MS), in particular.

In fact, the last time I recommended MS, my readers had the chance to score 124% in just two days. To see how you can get in position for the next quick-hit triple, click here.

3 Responses to “This Earnings Season’s Hottest Company to Trade”