No matter what you may have been told by the talking heads in the mainstream media, there’s only one true way to get rich in the stock market – and it’s not the ol’ “buy and hold” strategy.

Now don’t get me wrong…

It’s true that you can make some money investing in stocks and mutual funds. But the most you’re looking at on average (in a good year) is only about a 10% return. And to maximize your profits, you’ll likely need to hang onto those investments for 10, 15, or even 20 years.

But you don’t have to wait that long to get back what’s rightfully yours.

And it’s as easy as this…

Why Options are the Fastest Growing Moneymaker in the World

There are times when the price of a stock purchased for investment simply does NOT increase. There are times when a stock just sits still for weeks or months on end. That can be trying on our patience. What’s worse is waiting for a stock to move while it’s still been trading at the same price from six months to a year prior. It’s simply infuriating. 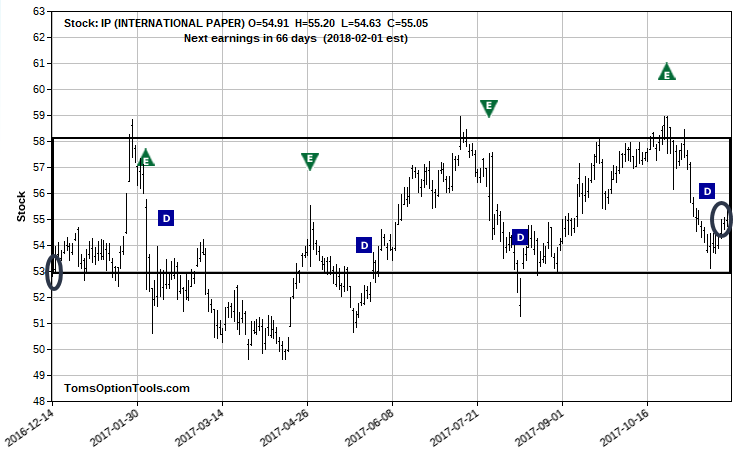 In the above chart, we can see the $53 entry price (left-most circle) on International Paper Company (IP). And if you look at the far-right circle, which is almost one year later, IP is only trading at $55.


That’s a meager two-point gain! Credit to those of you who have the constitution to sit on this for a year just to see a sub-four-percent gain, which isn’t an actual profit until you sell it. At best, you’d have to hope for the dividends to be paid out as a small consolation. This is why we do things differently…

You can do this by looking at support and resistance areas where buying and selling at these levels can be accomplished.

Buying at $53, then selling at $58 could have been accomplished three times within the aforementioned year. With my method, that trader would have been making five points per share three times for a cumulative 15 points over the year’s time frame.

Those 15 points represent a 28% gain on profit potential, which is a much better return for the trader than for the investor.

Bring in the options and you get the power and leverage of these positions working for you. Even when options don’t result in larger point gains, the rate of return should still be much greater. 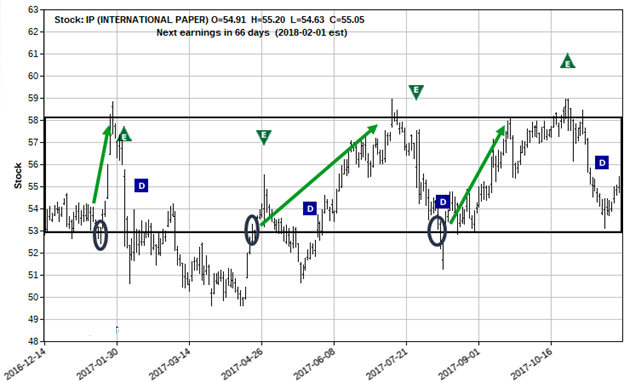 Using this same chart and the same three times IP traded between $53 and $58, we can also consider another option-trading strategy.

Cashing In on Range-Bound Stocks

Let’s say we purchased the stock and an option when it was at $53. Instead of rushing to sell a call option against our 100 shares (there must be 100 shares or 100-share increments), we could wait until the stock trades up to a resistance area, and then write (sell) the call (or calls).

Looking at that same option on September 14, it was trading at a price where we probably could have sold it for $1.00. Basically, we would have sold the call for 100% more than the amount we would have made if we had rushed to sell the call against the stock right away.

There’s a tactic to consider with the Covered Call Writing Strategy: Buy the stock at support, and wait to sell the call at a resistance area.

If the stock were to stay above the $55 call we sold, we’d likely get called out/sell our stock. This is how we can make money on the sold call AND the capital gain on the sold stock.

And we’re O.K. doing that because we have studied the chart’s price pattern, and we know we can simply wait until the price comes back to $53, where we can consider buying the stock again. After the stock rises to another resistance point, we write a covered call again.

Since history and stocks often repeat themselves, we can set ourselves up for profits over and over again.

Meanwhile, the investor is just sitting on a stock that’s going nowhere, making little gains and no profits after an entire year. While the investor twiddles his or her thumbs, we traders make profits.

P.S. There’s still time to get in position for these kind of fast-moving trade recommendations… In fact, I’ve lined up six new profit opportunities that I expect to return at least 665% by New Year’s Eve. That’s enough to put a quick $6,325, $12,650, even $25,300 of extra cash in your pockets for the holidays. Click here to learn more…