We all know what happened in the stock market last week.

On the flip side, a small group of readers let those market moves roll right off their shoulders, having the opportunity to walk away with a 50% win in just four trading days.

You see, I developed this new invention to withstand the market highs and lows, helping me to show you the opportunity to profit whether the markets are up, down, or sideways.

Go here now to learn how you can get in on the next profit-packed recommendation.

And while it seems as though volatility isn’t quite over – that’s not what I want to talk about today.

Instead, I want to focus on a company that’s found itself in a center-stage battle with President Trump himself.

This company is one of the most valued companies in the world when it comes to patents.

It’s got royalties coming in from all over the world.

Why Qualcomm is Still a Long-Term Buy

Broadcom Ltd (AVGO) was on the final leg of its campaign to take over one of the largest chip makers in the world, Qualcomm, Inc. (QCOM), in March…

But this plan quickly went off the rails as President Trump stepped in and blocked the deal – ending the impending partnership.

For Broadcom, this has been a long and tedious process filled with offer after offer, which QCOM denied – and Broadcom Ltd. was on the edge of their seat, even considering shaking up QCOM’s board of directors to make the merger more promising.

And just 48 hours before the shareholder meeting was supposed to take place to determine if the merger would happen- President Trump halted the progress, claiming it would raise many national security concerns.

But this isn’t the first time QCOM has found itself at the center of a media frenzy.

You see, Qualcomm’s patent library is considered one the most valued in the world. They receive a royalty on every phone that has their chips inside.

And this has put them front and center for scrutiny.

For instance, A few years back China filed an anti-trust suit against them, renegotiating their royalty rate and fining them close to a Billion dollars.

On top of this, QCOM has a history of licensing fee battles. For example, Apple, Inc. in one of its recent legal findings claimed that QCOM acts like a “patent troll.”

This turmoil has caused most investors to run the other way – and in turn, most financial advisors have sent out a major warning to stay away from the company altogether…

But QCOM is trying to take the right steps to paint itself in a better light.

For instance, the issue surrounding their board members seem to have been resolved. CEO Paul Jacobs has been removed and they reduced their board to strictly ten members…

And after being the target of a takeover – the company is trying to show they are still functioning and looking to expand. Recently they offered to buy NXP Semiconductors N.V. (NXPI) in a deal valued at about $44 billion.

But despite the negative press- — people like Chad Morganlander, who is a portfolio manager at Washington Crossing Advisors, is looking to the future instead of focusing on the present. Morganlander made it clear that in his book, QCOM is a “value play” that would see above market return over the next year – and would be a great investment if you have patience on your side.

And I think he has a good point.

You see, this sudden peak in selling on this stock will soon come to an end – and with the new developments coming out of the company like the 5g technology – I believe the stock will hit a bullish run and continue to soar. 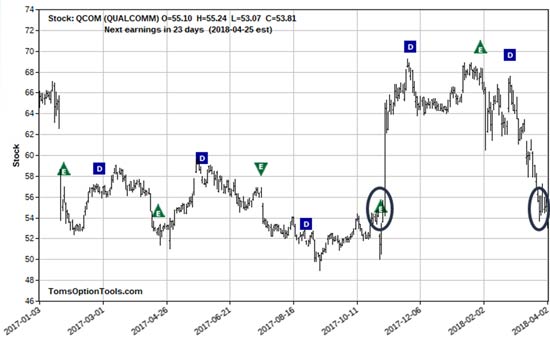 But that doesn’t mean we want to add this patent giant to your portfolio just yet. You see, QCOM is due to report earnings on April 25 – and we know earnings can flip any stock.


So for now, keep an eye on this stock and if earning fall our way – look into call LEAPS for this stock – the profit is yours to take.

That’s all for now,

All the experts who missed Bitcoin’s mind-blowing run-up are now predicting gloom and doom. So why are people listening to them? What credibility? We tracked down the one man who in 2013 got it right, and he’s about to reveal his latest prediction this Thursday at Money Morning’s exclusive Bitcoin 20x Summit. Go here for this “Must Listening”