You probably have heard all about the impending T-Mobile (TMUS) and Sprint Corporation (S) merger that’s in the works.

It’s one of the hottest discussions in the financial world right now, with the main question being…

Will this merger wreak the same havoc as the Sprint/Nextel merger back in 2005?

That’s why today, I’m going to show you exactly which company is the one to put your money on.

So let’s get started…

This $26 billion deal has triggered many Sprint (S) customers’ memories of dead phones and spotty service from the Nextel and Sprint (S), which happened in 2005. The 2005 merger hit the company hard – resulting in a loss of ten million customers, billions of dollars, and a long eight years trying to come back from it.

And many worry this is the fate of the impending deal.

You see, if this deal goes through, it will create the third-largest wireless company in the U.S., only falling behind Verizon (VZ) and AT&T (T). The then combined company will be worth $146 billion, including debt.

T-Mobile (TMUS) is promoting the merger by claiming it will allow them to cut prices, but others, like Nick Economides (professor of economics at New York University’s Stern School of Business) are saying it will be hard to go from four companies to three companies without increasing prices.

But there are some bright sides to this merger, like the guarantee of job creation due to the company’s interest in working with 5G technology.

Here’s what that means for you – and your portfolio…

Typically the stock being bought out tends to hover around their buyout price until the merger is finalized, after this, the stock simply gets dissolved into shares of the new company. So, the chances of you seeing a big pop is low…

That being said – I see success with T-Mobile (TMUS).

Now, T-Mobile (TMUS) already reported earnings on May 1 – and beat both earnings per share (eps) and revenue expectations. This is what the company reported without taking account of the impending merger, so we’ll have to see how this will play into the next upcoming earnings announcement. The stock for T-Mobile, (TMUS) has fallen quite a bit since the announcement of the merger and the release of earnings and revenue.

But, just because the stock has dropped, doesn’t mean it will continue to do so. In fact, according to the numbers, T-Mobile (TMUS) netted more than 1 million customers for the 20th consecutive quarter – which is great news for the stock. 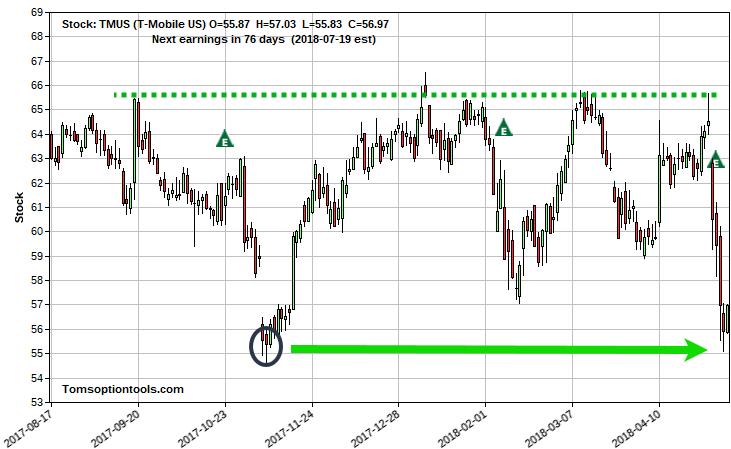 So here’s how you can profit…


But – as always – be sure to talk to your broker before jumping into anything.

Of course, there’s much more data that plays into this kind of profit opportunity.

Now, I spent over five years and millions of dollars developing this technology to find moves that have a high probability of doubling –even– tripling your money.

In fact, just last week I showed my members the secret to doubling your money on the world’s most expensive stocks. And, I revealed a payday appointment on a favorite “FANG” that could put a 200% profit in your pocket.

It all starts with my boldest invention to date… It’s a secret that made me a multimillionaire… And now, I’m showing that secret to you on a silver platter. Click here to read more…