You may have been seeing a lot about “share buybacks” in the news lately – especially after Apple, Inc. (AAPL) announced a new $100 billion stock repurchasing program.

Now I know that “buybacks” may not sound like the most exciting thing in the news right now – but the truth is, they’re extremely important for the overall market.

In fact, they’re even more important when the major indices are in the red – like we saw on Tuesday when the Dow plummeted nearly 200 points.

But that’s where a buyback comes in…

Not only could it be the catalyst for the start of a new rally higher – it could open the door to a new, lucrative trading opportunities –

Three Reasons Why Share Buybacks are Good for Your Bottom Dollar

The Amephenol Corporation (APH) is an electronic and fiber optic manufacturing company in Connecticut. Late last month, on April 25, the company released their earnings and beat all expectations, including earnings per share and reported revenue.

But more importantly, they recently announced their plan to execute a $2 billion share buyback program that will equal to 7.9% of their stock.

Now buybacks are always a sign of good things to come. You see, they tell investors that the company has confidence in its growth prospects – and it also shows confidence in the operations, sales and revenue producing potential over a longer haul. And this make the company much more appealing to investors as you know the stock has the capability for continuing to climb in price.

Here are the top three reasons why share buybacks are good for the stock market – and your pockets: 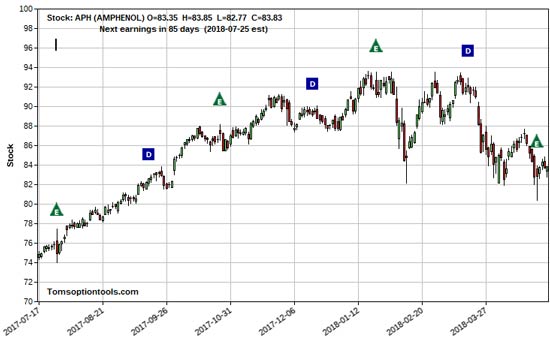 Now, APH does not have Long-Term Equity Anticipation options (LEAPs, for short) – and the farthest out option expiration is October 2018.

But here’s a trade idea for you to consider…

The ideal setup for this trade would be to close half of your position when your trade doubles in value and close the remaining half for another double. That’s a 200% profit on one trade – not too shabby.

Of course, this is a trade consideration only – so you’ll want to speak with your broker to determine the most suitable profit plan for your needs.

Now if you’re a buy-and-hold investor, then you’ve got nothing to worry about in terms of duration or expiration….

The thing is, the amount of money and time you need to build your wealth buying and holding stocks – especially in volatile markets – depends on your own lifestyle and desires. There’s no “magic number” to get to.

But my friend and colleague, who just so happens to be the #1 stock trader at Money Morning, just dropped a two-ton bomb on the financial industry, one that I had to see to believe. It’s a new way to collect THOUSANDS of dollars each week by clicking a single button on your computer or smartphone, and without touching a single stock (or stock option).

And like I said, in today’s chaotic market, this is the PERFECT way to make insane money each and every week. I’m honestly jealous I didn’t come up with it myself… Click here to see for yourself.