Amazon.com Inc. (AMZN) has been all over the news recently – and for good reason.

For my Fast Fortune Club members, it’s been the hot topic after I recommended closing the position out for 181% total gains. My next recommendation comes out next Friday, and the profit potential here will shock you…  (Click here to learn more.)

On top of that, Jeff Bezos and company announced their recent partnership with Marriott International, where the Amazon Alexa would be used as a “butler” in their hotels.

So it’s easy to see what the hype is about when it comes to this retail Goliath.

But I actually want to focus on something today…

Nearly one year to this day, “Project Athena” was born

Now, that isn’t the name of a secret spy mission – it’s the code name given to the $13.7 billion deal buyout between AMZN and Whole Foods.

And based on the numbers, you’ve got a chance to claim your share of the profits – without sacrificing your hard-earned cash on a single share of the stock.

Here’s what I mean…

Before this deal, many speculated – but had no real idea – that Whole Foods, Inc. (WFM) was in a real bad situation, with rapidly-declining sales.

That’s when Amazon.com, Inc. (AMZN) stepped in to save the day…

And now, it looks like that was one of – if not the – best decisions they could’ve made.

Of course, the overall grocery market would disagree. The industry as a whole has not done well since this acquisition.

After the announcement, KR dropped from $31 per share to $22. It’s taken a solid year to reach the mid-point of that trading range ($26). Another grocery stock, Supervalu Inc. (SVU) also dropped sharply when the deal was announced, from $29 to $22. And after a full year, the stock still hasn’t recovered (currently trading right around $21).

In fact, you could say the grocery industry got “Amazon’ed.”

AMZN is the second most valuable company in the world, with Jeff Bezos sitting at a comfortable $141.9 billion. It’s got a hand in almost every market imaginable… from selling household goods, medicines, and electronics to developing award-winning original TV content to cloud computing, to name a few. That’s what makes a “fight” with this giant virtually impossible to win.

No matter the industry, AMZN has a way of destroying competitors’ share prices since these companies are often unable to compete in terms of price, distribution, shipping, marketing, and operating costs across the board. That’s why when it comes to the grocery market, the only exposure I’d want to have right now is through AMZN.

And this price chart if just further proof of why… 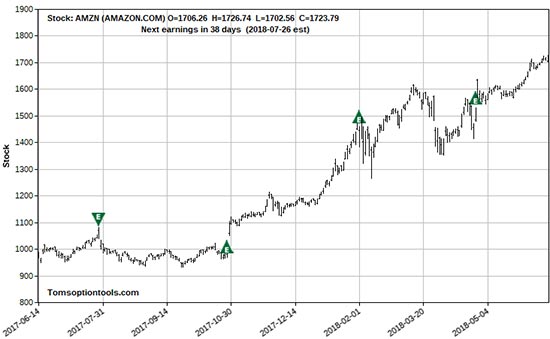 This is AMZN’s stock chart over the past 255 trading days. Now, I’m not going to give sole credit to the Whole Foods acquisition alone for this rise in price.

But I will say this…

Whatever AMZN has got up its sleeve, this buyout has definitely been a huge contributing factor of its success. And that also means you’ve got a ton of new lucrative opportunities to get in on.

But why throw your money away on shares of an expensive stock like this – around $174,583 per share – when you can flip it instead, using a call debit spread (or what I call, a “green loophole trade”). This is a low-cost way to leverage expensive stocks like AMZN without ever buying a single share outright.

And before I go, I need to make sure you’re aware of what’s happening in Canada RIGHT NOW. Plain and simple, it’s an opportunity of a lifetime. The biggest marijuana event in HISTORY is unfolding before our eyes.

Forbes calls this massive boom “the best ground-floor opportunity we’ve seen since the early days of the Internet.” This is your chance to get in on the Canadian pot boom. But you need to get the details now… because even a few hours could set you back millions.

4 Responses to “Cash in Now on the “Project Athena” Effect”