For the past nine years, Tom and his team of scientists have been working secretly on their first-ever “robot” prototype – it’s called Alpha-9. Unlike its robot cousins iRobot’s David and Samsung’s Bot Care, it doesn’t blink or feel emotion – it does something way more powerful… It channels the power of artificial intelligence to tell you exactly when it’s pinpointed a “Double Your Money” trade. By the end of this year, if you listen to Alpha-9 every day, you could easily become a millionaire. Learn how to listen to Alpha 9’s commands now.

I’m sure we can all agree that as humans, our obsession with robots continues to grow substantially.

And while most of that lies in what we see in sci-fi movies, like robots who can feel, think, and act like humans, I’m talking about something different today…

We are far beyond that…

And this new advancement could open one of the biggest trading opportunities of the year.

Here’s what I mean…

Robotics: The Next Big Tech Revolution That Could Lead to Triple-Digit Gains 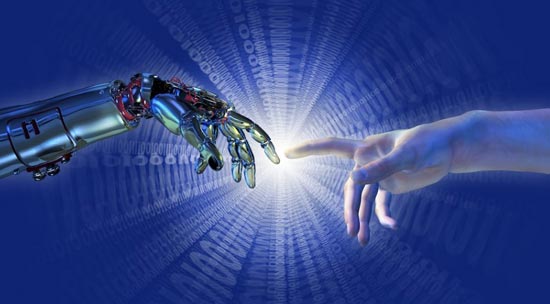 Many films over the ages depict the co-existence of humans and robots. The film “I, Robot” featuring Will Smith, depicts service robots with human-like intelligence and capabilities, even the ability to reason, think and feel emotion.  In the movie “A.I. Artificial Intelligence,” David, a life-like robot boy longs to become a “real” human to capture the love of his human mother.

Clearly, humans are fascinated with the idea of replicating themselves in robotic form.

And while we may be a long way from creating robots like David, there are some amazing advancements that are moving quickly in this direction.

For example, Samsung is now showing off one of its new service robots, “Bot Care” at this year’s Consumer Electronics Show (CES). Endowed with expressive eyes that actually blink, this robot is designed to help the elderly stay healthy by checking vitals like blood pressure and heart rate, handing them medication and even monitoring sleep quality.

But Samsung isn’t the only company looking to get in on the early stages of the technological revolution. Some very big players are jumping in with both feet into the robotics space.

Boston Dynamics (NYSE: BSX) is one of the leading robotics innovators.  It has a 2-legged prototype called “Atlas” that can walk, run, jump, climb stairs and even do back flips. The robot can also manipulate objects with two “hands.”  BSX will be releasing its 4-legged robot called “SpotMini” for commercial use in 2019.

Amazon (NASD:  AMZN) is even in on the robotic action and is working on a domestic robot called “Vesta” characterized as an Alexa on wheels with computer vision enabling Vesta to navigate through homes.  AMZN has plans to release the robot in 2019.  Additionally, AMZN is also rolling out its AWS RoboMaker cloud robotics platform that helps developers build robots, add intelligent functions, simulate and test robots in a variety of environments.

Chinese robotics company, UBTech, has raised $1 billion and currently has a $5 billion valuation. It will be launching its humanoid bipedal robot, “Walker” at this years CES 2019. Walker is reported as having the intelligence and capabilities to make a helpful impact in any home or business. Walker even plays the piano

Chip giant NVIDIA Corp (NASD: NVDA) is fully in the robotics game. The company is launching its latest version of its Jetson AGX Xavier chip module, which is essentially a server on a chip that handles all of the AI processing, imaging, and other computing tasks for autonomous drones and robots.

Facebook (NYSE: FB) is currently hiring robotics talent and has made public its patent for a telepresence robot.

Microsoft (NASD: MSFT) is in on the game too offering Robot Operating System (ROS) support for Windows 10 to be released early 2019.

Japanese company, GROOV X is set to release its like of LOVOT companion robots in 2019 designed to provide emotional support through AI-driven interactions. The company has already raised more than $37.5 million in funding for the venture.

And LG is all in on the robotic rush with a slew of service and deep learning robots in the works.

Now, I could go on and on with the mind-blowing advancements that are being made in robotics and even more big names in the space…

IDC reports that global spending on robots and drones will top $115 billion in 2019. And International Federation of Robots (IFR) forecasts that personal robot spending alone from 2016-2019 will reach $23 billion.

It is clear to me that robots are here to stay and, really, we’re just getting started.

So, the big question is how do we profit?

Well, we can invest in one or more of the companies just mentioned above (or others). The risk in this is that it’s difficult to pick the companies that will be one of the ones left standing.

But one sure-fire way to invest in this developing sector is to diversify risk and allow experts to choose for us with robotics and A.I. Exchange Traded Funds (EFTs).

There are many – a good confirming indicator for the validity of the space.

Here are just a few to consider:

First up, we have Global X Robotics & Artificial Intelligence Thematic EFT (NASD: BOTZ). This company invests in companies involved in the development and production of robots or artificial intelligence. It currently has a market cap of $25.47 billion.

Another great option is ROBO Global Robotics & Automation Index ETF (NASD: ROBO). ROBO was the first robotics and AI ETF provides investors a way to gain access to the most rapidly evolving robotics and AI companies around the world.  Its current market cap is $1.24B.

Now, the numbers speak for their self when you’re looking at the future of the robotics sector…

Robots are here to stay – and the truth is, they will only get more sophisticated.

So, get ahead of the rush and jump into the sector that is trailblazing its way to being the next big technological revolution. Because soon enough, it will be serving up your biggest profits ever.