From leading the Apple App store in downloads to the decline of the iconic yellow cab, ride-hailing apps have continued to become more and more popular over the last few years.

Uber and Lyft are leading the pack, hosting a combined 125 million users.

Now, Lyft is looking to break out from its ride-hailing counterparts…

And on Friday, the company filed for its first IPO.

But no matter the number of users, drivers, or rides – money talks, and Lyft doesn’t have much to say…

So, here’s what you need to know before you invest in this brand new IPO…

Ride-hailing company Lyft officially filed for its IPO prospectus last Friday, with the intention to raise as much as $100 million in its public offering.

The company is gunning to be added to the NASDAQ by the end of the month. And will come with the symbol LYFT.

But the IPO and the companied financial raised some red flags…

The company loses money every single year. For Lyft though, it’s always been more about the mission than the money. The company is aiming to “improve people’s lives with the world’s best transportation.” And if you go to Lyft’s website the company expands on its motto:

“The why in what Lyft is doing is most important to us, as well as the cities and communities we serve, and it will always be our company’s North Star.”

But regardless, this focus on improving lives and redesigning cities can’t distract investors from the glaring red in the spreadsheets. And while this company is brimming with growth possibility, the financial side of the business is lacking.

This was magnified in their recent earnings announcement as the company reported $2.1 billion in revenue. And while this number was impressive, it couldn’t mask the amount of money that the company lost – a staggering $911 million. 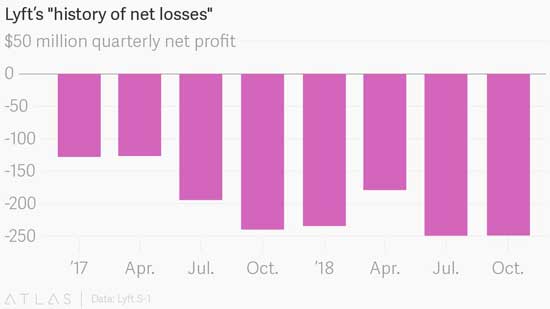 Now, as investors, it’s easy to see household names – the one’s whose app you have downloaded on your smartphone – and get the urge to add them to your portfolio. But just because the company is popular in the public eye, doesn’t mean you should automatically buy.

On top of the less than impressive finances, IPO competition is fierce and the market is much harder to find success in than it was back in the 2000’s. When many people think of IPO’s, they remember the success companies like Google. The company’s 2004 IPO raised more than $1.8 billion, while also making its shareholders very rich. But every IPO isn’t a “Google,” and it’ important to keep that in mind.

The biggest red flag when it comes to Lyft’s next big venture is that there is no guarantee that the company will ever be profitable. Ride-hailing is a new concept, and currently there is no historical data to prove that these companies will ever move into the realm of profitability. And the company knows this. In Lyft’s IPO filing, the company noted…

“We have a history of net losses and we may not be able to achieve or maintain profitability in the future.”

And while there are many companies that have gone public and not been profitable (like Blue Apron, Etsy, and even Twitter), Lyft admitted it doesn’t believe the financials will be changing course anytime soon.

“Our expenses will likely increase in the future as we develop and launch new offerings and platform features, expand in existing and new markets, increase our sales and marketing efforts and continue to invest in our platform,” Lyft writes in its filing. “These efforts may be more costly than we expect and may not result in increased revenue or growth in our business.”

Now, while Lyft’s IPO prospects leave a lot to be desired, there is an emerging industry filled with potential million to billion-dollar IPO opportunities…

But here’s the deal. When it comes to really making a fortune with IPOs, you need to have access to the details that most people don’t.

And today, one of the world’s top venture capital experts wants to change that. In fact, he’s going to reveal a series of extraordinary deals that if you decide to participate, you are guaranteed to join the 0.1% of the richest, most respected investors in the world.

All the details are right here… and folks, this is the new angel investor opportunity you’ve been waiting for.