The evolution of the cell phone is like nothing I’ve ever seen.

It feels like a million years ago, but I still remember when people first started using them. They were massive, clunky things that rarely even worked.

Now, they fit in your pocket. And they can tell you everything you’d ever need to know, from the weather to the quickest route home. You can even use them to trade!

The cell phone of the early 90s is a whole lot different than the one you’re probably using today. And the new technology is still on a fast-track to the future.

Microsoft Corp. (NASDAQ: MSFT)‘s newest smartphone proves that. It looks completely different than the pocket-sized rectangles we’ve grown used to, and it could shoot MSFT into an entirely new world of profit opportunity.

Here’s how you can cash in…

When Microsoft Corp. (NASDAQ: MSFT) first became a company, it was laser-focused on software development. The name “Microsoft,” in fact, is a combination of the words “microcomputer” and “software.” Since 2016, it has been the world’s largest software maker by revenue.

But now, the technology company is shifting its focus to hardware.

On Wednesday, October 2, MSFT debuted several new products at its annual hardware event. Among them was a new Surface laptop, an updated tablet, and a new set of Surface earbuds. But the biggest product reveal was the Surface Duo smartphone.

The phone has two 5.6 inch screens connected by a 360-degree hinge, and when it’s folded up it can fit right in your pocket. It can run two different apps at the same time, or the second screen can be used as a game controller, keyboard, or a stand for watching videos.

Now, the phone may have surprised customers – but this isn’t MSFT’s first venture into the smartphone space.

At the start of this year, MSFT discontinued the Windows Phone after it didn’t sell as well as expected. But there’s a key difference between Windows Phone and the Surface Duo, and that’s its operating system.

“We’re partnering with Google to bring the absolute best of Android into one product.”

The Duo, available at the end of 2020 in time for the holiday season, comes at an interesting time for the smartphone market. Apple Inc. (NASDAQ: AAPL), one of the world’s most popular smartphone makers, just launched its newest iPhone. But with little discernible differences from old models, the iPhone 11 didn’t do much to impress customers.

The same can’t be said for the Duo, with its double-screen look. MSFT could have just brought the market the never-before-seen phone they’ve been waiting for… boosting its own stock in the process.

MSFT shares are up 26% year-to-date. In recent months, however, the stock has remained stagnant… 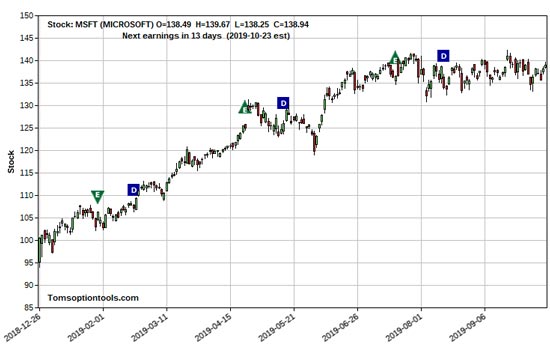 Even after the company impressed investors with an earnings beat, reporting $1.37 earnings-per-share compared to the $1.21 estimate from analysts, shares barely moved.

But the Surface Duo might be exactly what the stock needs. And it’s just the first product in a line of new innovations from MSFT. According to CEO Satya Nadella:

“We believe the next decade will be about creation and amplifying what we can do as humans.”

All of this spells the perfect time to get in on the popular tech stock.

There’s just one problem. MSFT is one of the most expensive stocks on the market, currently trading around $138 per share. Let’s say you want control over 100 shares – it would cost you a total of $13,800 to buy the stock.

When stocks are this expensive, even a simple call option can break the bank. That’s why I want to tell you about a strategy that can cut your risk significantly while delivering the same kind of impressive returns…

It’s called the Loophole Trade. By buying a call option on a stock while simultaneously selling a call option with the same expiration date but a different strike price, you can cash in on expensive stocks without emptying your wallet.

That’s what my readers did with Waters Corporation (NYSE: WAT) just last month.

Really, that’s the name of the game when it comes to trading options. Big profits – and fast.

Reader: I don’t understand how to get my options clearance… and I really want to get started trading with your more advanced systems right away. Can you help?

Tom: Check this out! You can get started with just five easy steps.

Reader: Hey Tom, my daughter is getting married at the end of the year. I want to do everything in my power to make sure it’s all taken care of for her before then. What do you suggest I do?

Tom: Look – there’s no magic secret or “get rich quick” scheme in the world that will guarantee results. But over my 30-plus year career, I’ve learned that there’s nothing that could grow your wealth quicker than consistent paydays. And that’s exactly what I give my Alpha-9 readers every single day.

If you get in on my trade recommendations every morning, you could easily double – or even triple – your stake. I do this for every single day the market is open.

Already this year, anyone following along with me could’ve turned a series of $500 stakes into over $100,000… so I’ll let those results speak for themselves.

Look – you only get a few chances in life to make big things happen. And when opportunities present themselves, you gotta be decisive. I truly believe that with my Alpha-9 system, you could make all the money you need – and then some.