Global information provider IHS Markit projects that in the first quarter (Q1) of 2020, world oil demand will decline by 3.8 million barrels per day (BPD) from a year earlier. That would make for the biggest slump in history. Previously, the largest quarterly decline was during the financial crisis, when Q1 2009 oil demand fell 3.6 million BPD year-over-year.

During oil production talks at the Organization of the Petroleum Exporting Countries (OPEC), production cuts were recommended – cuts that Russia vehemently rejected, sparking an all-out price war with Saudi Arabia, who started slashing prices to compete.

So, let’s boil this down. Demand for the world’s most important commodity is dropping, and the world’s leading oil producers are fighting, increasing supply.

Lowering demand and increasing supply spells one thing: more downside, at least for the short-term. In fact, investment bank Goldman Sachs predicts the price war could drop oil as low as $20 a barrel.

Let’s take a look at a chart of crude… 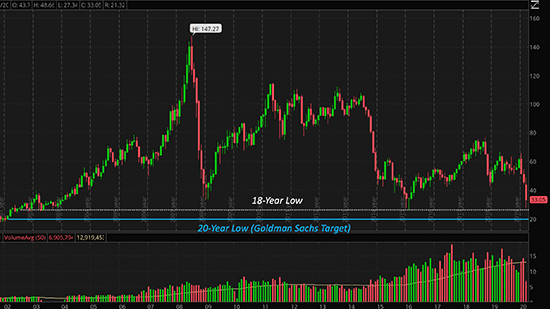 This is where the opportunity comes into play. See, the United States Oil Fund LP (USO), which tracks the price of West Texas Intermediate Light Sweet Crude, has just hit an all-time low. 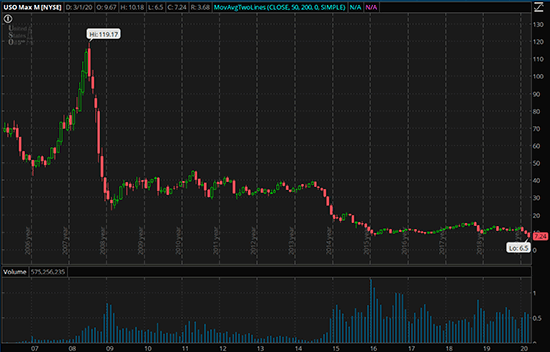 And it’s not the only one. Oil services companies everywhere are taking it on the chin.

Where the price of oil goes, so goes oil service stocks. Therefore, when oil recovers, so will the OIH.

Remember when I mentioned the cost of filling your tank? Gasoline prices have dropped to lows not seen since 2008. The United States Gasoline Fund, LP (UGA) has reached 12-year lows, as illustrated in the chart below: 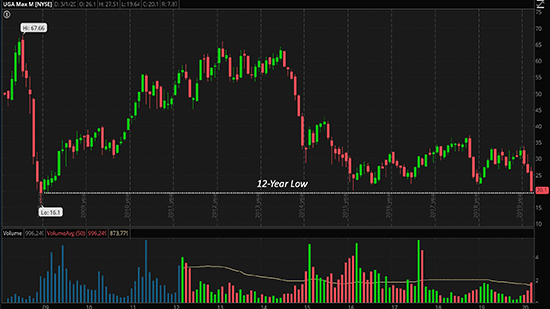 Many people will look at these charts and see one thing – bad news. That’s because oil tends to serve as a measure of global growth expectations. So, when oil prices are dropping, many fear that so is economic growth.

But you can’t let fear keep you on the sidelines. The fall in oil prices is actually spelling out an impressive profit opportunity…

The coronavirus will eventually be contained, and people will return to their daily lives, increasing oil consumption to normal levels. And the OPEC won’t be content with $20 per barrel prices for long, meaning supply will eventually drop, driving prices up yet again.

But to supercharge your returns, you can buy long-term options (LEAPs) or sell 30-day covered calls.

Whatever strategy you employ, you don’t want to let this multi-decade opportunity to pass you by. But oil isn’t the only market stacked with potential right now…

2020 is shaping up to be a landmark year for cannabis markets as well – and I want you to be able to capitalize on this unprecedented economic phenomenon.

That’s why I teamed up with legendary quarterback Joe Montana and cannabis pioneer Danny Brody for the 2020 American Cannabis Summit.

And the three numbers you absolutely need to check before investing a penny in any cannabis stock.

Watch it all right here.