We’ve got a worsening global pandemic with no proven treatment or vaccine, record levels of unemployment in the U.S., and now widespread civil unrest.

And how did the market react? It rose over 47% from the March 23 lows.

The massive amount of stimulus money being pumped into the economy, combined with optimism for a post-coronavirus recovery, has the market back within striking distance of all-time highs.

It’s times like these – with the economy and the market so obviously heading in different directions – when traders and investors can be tempted to take their profits and head for the sidelines.

But that’s exactly the opposite of what you should be doing.

In an unpredictable market like this, the profit opportunity is there – you just need to be able to jump on it fast, before stocks change direction yet again.

After trading for 30-some years now, I have one major goal – to help people like you reach your financial dreams, making enough money to live the life you’ve always wanted but never thought possible.

And the best way to do that is by trading options.

Options are the fastest and most lucrative way to make money in any market… especially the uncertain one we’ve been experiencing the past few months.

And while I made my own fortune trading options, I don’t have a monopoly over every single options trading strategy there is. There’s always more to learn – and that’s why I’ve asked three of my colleagues to share some of their top strategies with you as well.

These guys are the best of the best. Trust me, I’ve seen them in action, and it’s pretty impressive.

So, without future ado, let’s get into the four best strategies to use right now…

As you know, a lot can happen in two days.

The Dow can lose over 900 points. It can gain the same amount back. The major indices can drop off a cliff or hit a new all-time high, all over the course of 48 hours. We’ve seen just as much the past few months.

But forget the broader market – what about the individual investor?

They can snag a 50% profit in the amount of time it takes for an Amazon Prime package to reach your front door.

That’s what my good friend, colleague, and 30-year technical trader Chris Johnson’s Night Trader readers had the chance to do, at least.

On June 2, First-Third Bancorp (NASDAQ: FITB) opened at $20.21. The signal came when the stock broke above the $20 -level for two days, then retraced below, and then broke back above the same price. And according to his technical analysis, the stock was poised for a jump higher.

One day passed, and Chris’s prediction rang true. The stock opened the next day a few cents higher, trading around $21.31.

But that was only the beginning.

And that call option reaped the benefits.

Just 48 hours after opening a call option on FITB, readers could have sold their position for $1.90 – pocketing a 52% profit.

Trading options affords you the kind of speed that long-term investing just doesn’t carry. And with Chris Johnson’s technical analysis skills, he can help give you an edge over other traders. You can learn more right here.

With a market moving as fast as the one we’ve seen in recent months, it’s one of the best ways to trade – and make the most out of two days.

But you don’t need the market to move up to make money. Sometimes, you can make even more if it’s falling…

Few industries have been hit harder during the pandemic than the airline industry.

The members of his The 1450 Club still had a shot to secure a 103% gain on American Airlines Group Inc. (AAL).

You see, if there’s any word to describe the last few months, it’s uncertain. There’s been uncertainty in the market, in the economy, and in day-to-day life.

When uncertainty is the name of the game, especially in the market, the last thing you want to do is lock yourself into anything for the long term. Because if we’ve learned anything recently, it’s been that just because a stock is up today doesn’t mean it will be up tomorrow.

But you shouldn’t just sideline yourself and bide your time until the market stabilizes. You just have to play it right. And that’s possible with the power of options.

See, a put allows you to profit while the stock goes down. It was the perfect setup at the ideal price – costing just $0.35 per contract.

So, Andrew recommended this powerful setup to the 1450 Club, giving his readers the chance to act.

Now, the thing you need to know about options is that when it comes to profits, they come fast. It’s nothing like putting your money into bonds and waiting years, hoping to see some kind of return.

Options can double, even triple in just a few days.

And AAL was no exception.

In fact, this put position hit its final profit target less than 24 hours later, allowing his subscribers the opportunity to secure a 103% gain in less than one day. You can learn more about Andrew’s trading strategy right here.

Throughout the market’s uncertainty, technical trading specialist D.R. Barton’s message has probably most aligned with my own: stay the course, and go with the flow of the market. You know what they say: the trend is your friend, after all.

And the results of remaining bullish have been very lucrative…

Last week alone, with the help of hidden “dark pool” data to find the strongest stocks in the market, D.R. gave Dark Edge Project subscribers the opportunity to cash in profits of…

And they didn’t have to hold those positions for months or years like stock or bond investors would typically have to. In fact, those four gains were secured after as little as six trading days!

To learn more about D.R.’s “dark pool” data, and how it can help you score gains like these, click here.

And last but not least, it’s time to tell you about one of my own favorite go-to strategies…

Since weekly options started trading, they’ve become the most widely traded of any options class – averaging 25% of any option on the S&P 500. And there’s a good reason for that. When trading weeklies, you can capture the kind of profits that’d take those buy-and-hold investors decades to make – in one week or less.

Weekly options offer expirations at market every Friday. Because of their short time frame, they’re much more sensitive to the underlying security’s price movement – meaning they have an increased profit potential.

On June 8, 2020, video game company Activision Blizzard Inc. (NASDAQ: ATVI) opened around $68. And according to my channel collision indicator, the stock was set to rise from there… 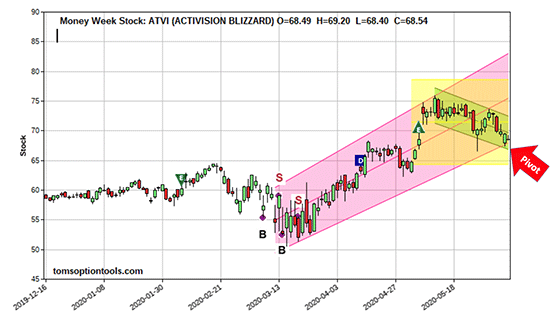 The support lines of the short-term (green) and long-term (pink) channels had collided near support at $78, providing a strong pivot point for a bounce – and a fast double.

So, I recommended my Weekly Cash Clock readers purchase a weekly option on the stock for just $1.79, or $179 for control over 100 shares. And just two days later, ATVI had risen to trade around $73 – allowing readers to sell their weekly option for $3.58.

They could have turned a 7% gain in the stock into a 100% profit, doubling their money in just 48 hours thanks to weeklies.

And you could be next. I send readers a new weekly option recommendation every week! Click here to learn how you can receive the next one.

As you’ve seen above, using the incredible profit power of options, traders can bank huge gains in just a matter of days or weeks. They’re a fantastic way to play the current market conditions – where no one is sure how long this bull run will last – allowing traders to achieve profits of 100% or more in a very short time-frame.

And these four strategies are the cream of the crop, plucked right from the minds of some of the best traders I know. Adding them to your trading arsenal is sure to put you in a profitable position while the market continues its grind higher – or reverses again.