A lot of people are scared of trading the market.

And the truth is that many people aren’t successful as traders. In fact, today, I’m going to tell you about two traders that lost their life savings on a single trade.

But that’s not because of bad luck.

(After a devastating four-month losing streak, this man became a multimillionaire just two years later. And he has this “insiders-trading” strategy to thank.)

See, trading is easy. But those that simply follow their gut and trade like they’re “betting on the black” will end up losing it all sooner or later.

But that’s not going to be you. You can trade your way to millions of dollars, financial security, the life of your dreams…

You just need to follow these two rules. They can turn any novice trader into a successful one…

If you’ve been with me for a while, then you might remember F.S. Comeau, the Canadian trader that lost $2.25 million of his $2.5 million inheritance trading.

Confident that he could make it all back on a single trade, he took it to YouTube and broadcast his million-dollar trade live. Wearing a wolf-mask, he celebrated what to him was an imminent windfall.

The man in the wolf mask was so confident that Apple Inc. (NASDAQ: AAPL) was about to announce poor earnings that he invested his last $250,000 on bearish option positions. Then, he waited for the announcement and his million-dollar payday.

What happened? The picture below says it all! 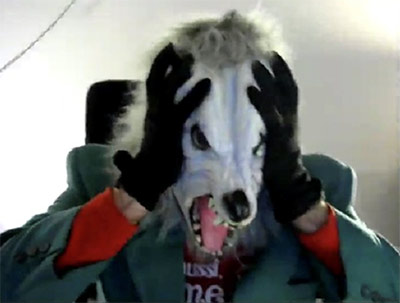 AAPL gapped up on the news, wiping out his bearish option positions. He lost his last $250,000 in a heartbeat. His reaction was painful to watch – he screamed like a mortally wounded wolf.


But “wolf man” isn’t the only trader who met this fate.

Three years later, it appears history is repeating itself. A 28-year-old Italian trader just lost his own life savings on a single position.

Back in January of this year, he backed up the truck and purchased $235,000 EUD worth of Luckin Coffee Inc. (NASDAQ: LK). The stock hit an all-time high on January 17, 2020 and this trader believed it would keep on going.

But that’s not what happened. 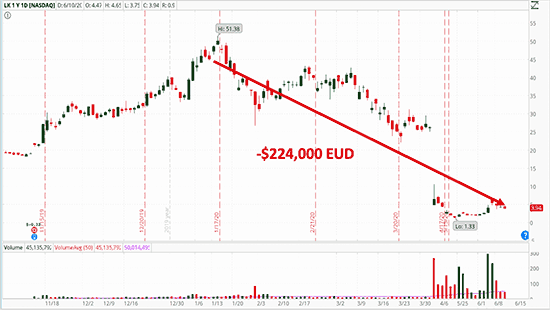 Plagued with coronavirus-inspired lockdowns and an investigation into financial misconduct that halted trading trading for a month and a half, LK today sits at $3.94.

How much did the Italian trader lose? Well, he generously published his account statement, shown below: 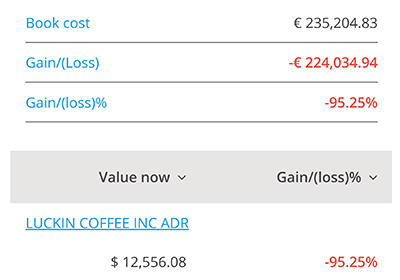 Now, over the two months preceding this purchase, LK had risen from $17 to an all-time high of $51.38, and this young trader “believed” that the stock would “keep on keepin’ on.” The key word here is “believed.”

Just like the “wolf man,” he went with his gut – which is one trading mistake you should never make. Trading with instinct or gut feel is gambling, plain and simple. It isn’t repeatable, and gut feel traders will get burned in the end, just like these men did.

But that’s not the only mistake they made. They also broke the cardinal rule of trading: “Never put all your eggs in one basket.”

They put all of their money into a single trade.

Even the best trade setups can end up as losers. Putting all your money into a single trade is like betting on the black in roulette. It’s great if you’re right, but if you’re wrong you may be flipping burgers at McDonald’s come Monday.

Now, I’ve been trading successfully for decades. And it’s not because I have better luck than these two men – it’s because I follow two very important trading rules…

I use objective entry and exit rules in my trades, leaving no room for gut feel. These rules are so objective that I can test them historically and prove that they actually generate reliable and consistent income. If they work historically, I run them live, following the rules exactly.

I always keep my eye on a single question before entering a trade:

What if I’m wrong?

Losses are inevitable in trading. It’s part of the game. Even successful traders will have losing positions.

Had these two guys practiced these two simple rules of trading, they’d have survived to trade another day.

Take it from my good friend, Andrew Keene. In four months, he lost more money than most people make in their entire working lives.

Less than a year later, thanks to a new rules-based trading strategy, he was banking over $200,000 a month.

And today, he’s sharing his success with people just like you. This month alone, he’s recommended 20 trades to a select group of readers. 15 of those trades were winners – and six were for 100% gains or more.

To learn how you can receive Andrew’s next recommendation, click here.

Here’s to your success,