Every now and then, stock indices like the S&P 500 and the Dow Jones Industrial Average rebalance themselves.

The major index is replacing three companies previously considered to be “blue chip” and replacing them with some “newer economic” stocks.

Now, these indices are constructed to create an average look at the overall stock market – and when component stocks no longer fit the bill, they get replaced.

But the loss of some of these top stocks has investors worried.

And the big question for investors remains: “How will this impact my portfolio?”

And I have the answer. Here are all the details on Monday’s Dow shake-up – and its effect on your money…

Your Portfolio Will Be Spared from the Dow’s Shake-Up

The move could very well have an impact on the way the Dow Jones index moves.

You see, the Dow Jones Industrial Average is a basket of 30 stocks that represent the broader U.S. economy. Stocks in this index are considered to be among the best companies in the U.S., and for that reason are called “blue chip” companies.

This is all happening because of Apple Inc. (NASDAQ: AAPL), the largest stock by market cap in the U.S.

The tech giant just announced its four to one (4:1) stock split, which means that shareholders will receive three shares for every one share that they already own. Currently, at approximately $500 per share, this split will divide that share price by four. The S&P Dow Jones Indices said that this split will cause the tech sector to be underrepresented in the index.

This is set to take place on Monday, August 31 – the same day that the Dow rebalancing takes effect.

Unlike the other market indices, the Dow is a price-weighted index, meaning that higher-priced stocks have more impact on the movement of the overall index (this is opposed to other indices that are market capitalization-weighted). Due to AAPL being the highest-priced stock on the Dow, its movement has the largest impact on the index’s overall movement. If stocks like Apple and Google rise while the majority of stocks fall, then the Dow overall could still rise – giving investors a false sense of how the market is moving.

Its 71% rise in 2020 was responsible for a meaningful portion of the Dow’s bullishness over the same period. On Monday, AAPL‘s price will drop to around $125, along with its influence on the Dow’s movement.

Here is a current look of the top 10 Dow stocks and their weighting (price): 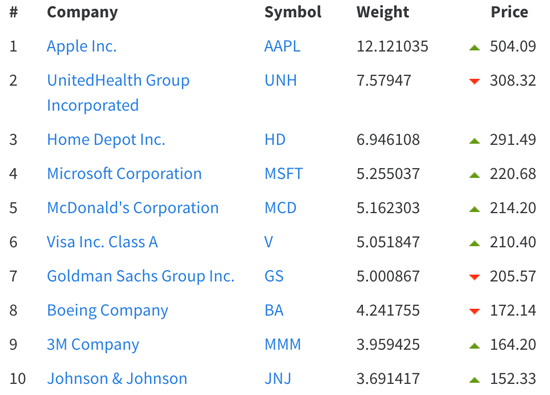 A look at the current bottom 10 stocks in the Dow reveals the three stocks that are getting kicked to the curb. 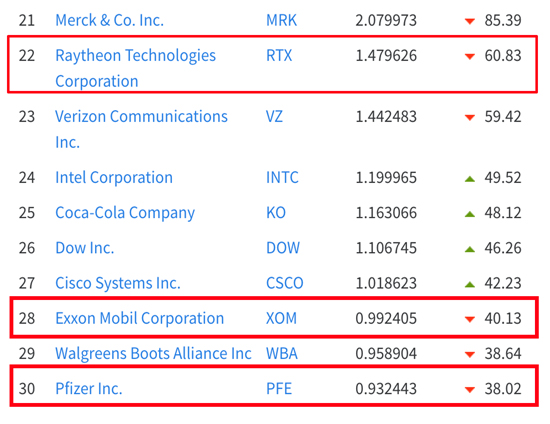 Not surprisingly, PFE is in the basement with XOM a few spots above. RTX is higher up in the list. Each of these stocks are down year-to-date.

After Monday, these stocks and their price-weighting will have no impact on the Dow Index.

Let’s take a look at the YTD performance and price of each of the stocks to be added on Monday:

It’s important to realize that the balancing isn’t meant to create a bullish index, but a representative sampling of United States industry.

Although being added to a major index like the Dow creates an immediate pop up in the stock, which is the case for the above stocks, those that were removed dropped only slightly.

Now, you may be wondering what all of this means for your money.

In short, not much.

This movement will not affect the Dow’s value due to the price-weighted measures we talked about earlier.

This shift in stocks will actually restore some much needed balance to the APPL-heavy index.

If you are looking for a way to make money off of this move, though, you want to look towards the long-term.

Barron’s reports that stocks exiting the index tend to do better the year following their removal than those added.

So even though this Dow movement will not affect your portfolio, if you want to profit on this movement, the best way to do so would to buy one of the three stocks that were removed from the index.