Today, we are going to get real about pot.

See, pot stocks have been around since medical legalization first began. And I’ve had a few in my own portfolio for the past several years. But right now, these stocks are on fire like never before.

Since February, U.S. stocks associated with pot have risen over 40%. Many are hitting new all-time highs as I type – and those that aren’t are well on their way.

Right now, pot stocks are home to some of the highest profit potential the market has to offer.

35 states and D.C. have legalized medical marijuana. And 15 of those states – plus D.C. – legally sell recreational marijuana as well.

One of those states is Michigan – and in just 12 months, the state’s cannabis industry secured $440 million in sales. Learn about the company accountable for 12% of Michigan’s cannabis sales right here.

The legalized cannabis market hit $13.6 billion in 2019. I never thought I’d refer to a number that big as “nothing,” but believe me – $13.6 billion is nothing compared to what’s coming.

The market is estimated to explode six-fold in the next 10 years. That means by 2030, we could be looking at an $80 billion-plus cannabis market.

And today, I’m going to show you how you can take a chunk of that change.

It’s time to get into the cannabis market now, so that you can take advantage of the 500% jump later.

How to Take Advantage of the Cannabis Industry’s 500% Jump

But even though the cannabis market was falling, February 2020 wouldn’t have been a bad time to jump into pot stocks. Today, those same names that dropped 40% are hitting new all-time highs.

It may be too late to take advantage of that eight-month jump. But the cannabis market still has much further to climb. Just check out how many states across the U.S. have taken steps to legalize marijuana: 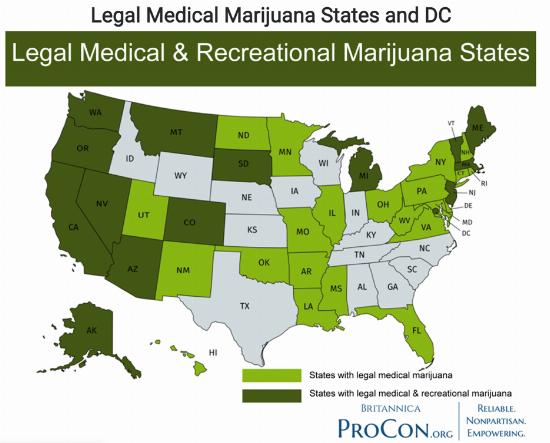 There’s much more green than grey on that map. And when you look at that, it makes sense that the industry is forecasted to explode. But with hundreds of companies across the country jumping into cannabis, it can be hard to find the names worthy of your money.

That’s why I put together the list below. These four companies are all worth taking a look at…

As a real estate investment trust (REIT), IIPR invests in greenhouses and industrial facilities for the medical marijuana industry. The stock is on fire and just hit an all-time high of $178, making it easily one of the leaders of the pack.

Although known primarily for lawn care, SMG‘s Hawthorne Gardening division is the largest distributor of hydroponic products in the U.S. Hydroponics is a way of growing plants, and its products are in high demand by cannabis growers. The stock is currently trading a new high of $192, and there’s further upside ahead.

Currently operating in 23 states, CURLF got its start by developing one of the first marijuana vaporizers. A pure marijuana play, CURLF has a string of five quarters of positive earnings announcements and is growing fast. It just set an all-time high and is a great buy at around $13 per share.

Surprisingly enough, Michigan is home to one of the largest marijuana markets in the U.S. Medical use of marijuana has only been legal in the state since 2019, yet it accounts for the fifth-most sales in the country with a whopping $1 billion.

When most people think of cannabis, they think of states like Colorado or California. But consumers actually spend more money on cannabis in Michigan. The average basket size in Michigan is about $85, compared to Colorado’s $59 and California’s $67. And whenever consumers are shelling out that much cash, there’s an opportunity at play.

Making up 12% of the state’s sales, this company is one of the best ways you can cash in on Michigan’s cannabis market. But unlike the previous three companies I showed you, it isn’t a publicly traded stock – yet. Find out how you could cash in right here.

If you want to diversify your exposure to the cannabis industry and have professionals build your “pot” portfolio, then you can step outside of specific companies and instead consider the ETFMG Alternative Harvest ETF (MJ), a market-cap-weighted index of global firms engaged in the legal cultivation, production, marketing, or distribution of cannabis, cannabinoids, or tobacco products.

Here are the top 10 MJ holdings:

Look, the bottom line is this: pot is here to stay. As Americans embrace the medicinal and recreational benefits of this “miracle plant,” you can start cashing in on the millionaire-minting market.


If you’re not already involved in this blossoming industry, I truly believe now is the time to do so. Here’s a great way to do just that.