The electric vehicle maker was set to be added to the S&P 500 after Friday’s closing bell. And in anticipation, the stock continued clamoring up, hitting a record high of $695 at the end of last week.

To see how crazy TSLA’s ride has been this year, just look at it compared to the past three: 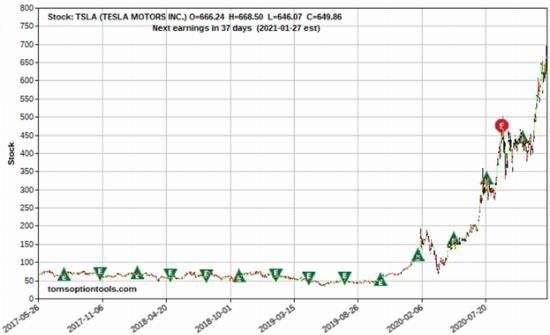 Almost all of TSLA‘s upward movement occurred in 2020. But on Monday, the stock opened on the S&P 500 for the first time. And its performance was less-than-exciting.

I mean, just Google “Tesla,” and you’ll see what I mean…

“Researcher says Tesla stock is too expensive and in bubble territory…” – CNBC
“Tesla: Prepare for a Significant Drop” – Seeking Alpha
“…Tesla Short Sellers Ramp Up Bearish Bets” – Yahoo Finance
Look – Tesla is one of my favorite companies. And as far as I’m concerned, this stock is still fraught with profit potential, no matter what the talking heads on the financial news networks have to say.

Just last Tuesday, I showed you a high-probability way to trade TSLA. And by Friday, that trade had returned 100% for a minimum of $1,000 in three days.

But with TSLA’s implied volatility running rampant, that trade was pretty high-risk. That’s why today, I’m going to show you a strategy with the same high-probability benefit – but without the high cost.

This trade has a 96.8% probability of profit – and you could see the money by Christmas Eve… 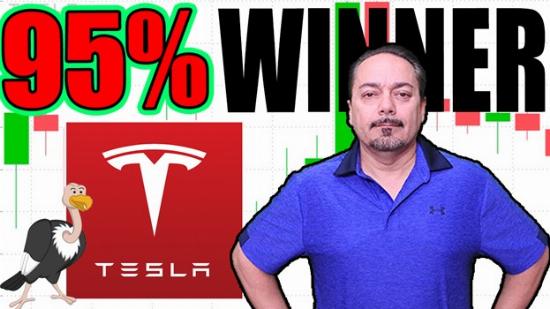 If a two-day profit is too long for you, then listen up – because I just discovered a strategy with the potential to profit in under 60 minutes.

It sounds too good to be true, I know. But the evidence is there. Last week, I recommended a trade on Netflix Inc. (NASDAQ: NFLX) that produced 25%… in three minutes.

This fast-cash strategy isn’t complicated, either. In fact, you can watch me explain it… and I don’t mean in a Youtube video like the one I shared above.

No, you can watch me live, up-close, and personal in weekly private Zoom sessions.

I’m only hosting these sessions for a small group of subscribers. In just one hour, I can show you exactly how to make money in less than one hour a day.

Tomorrow is my final Zoom session of 2020, and you don’t want to miss it. But I only have a limited amount of space left for new viewers…

To learn how you can receive an exclusive link to my next private, members-only Zoom session, click here.

I hope to see you there…