On January 6, we experienced history when Democrats took control of the U.S. Senate after the race in Georgia came to an end.

And you know me – when the news is running, my eyes are on the stock market.

On the same day that Georgia’s results were finalized, the Dow and S&P closed on all-time highs – and two specific sectors were ahead of the crowd. Both were up roughly 5% on the day and continued to climb.

But I’m going to show you how to play those stocks… for maximum profits.

Green Energy and Healthcare: How to Play Them for Low-Risk Profits

Two sectors poised to skyrocket from a Democratic government are green energy and healthcare.

Stocks in these sectors have been on the rise since the presidential election, and they gained an extra boost after the senate flip on January 6 that gave Democrats control of the majority.

Now, you always have the option to buy the stocks – but buying the stock outright has a downside. It takes longer to accrue gains, it can get expensive when you buy multiple shares, and it’s risky due to the fact that stocks could fall, and you lose money on your investment.

So let’s talk about how we can trade the stock without having to own the stock.

The best way to profit on these sectors is to buy three-to six-month call options to reduce risk and magnify returns. With options contracts, you will be able to hit higher profit margins faster – without the risk associated with holding a stock.

Take a look at the two sectors that benefited the most after the election results:

This alternative energy source isn’t a new concept – and I even predicted this move before the results of the presidential election! With the change in power, there is going to be a stronger push to develop solar-, wind-, and water-powered energy sources.

In fact, here are a few that gapped up on the Georgia State Senate news:

ICLN holds a portfolio of “clean energy” companies, which it defines as those involved in the biofuels, ethanol, geothermal, hydroelectric, solar and wind industries. Some stocks that make up this ETF include:

As you can see in the ICLN chart below, the stock gapped up on huge volume following the January 6 election news. 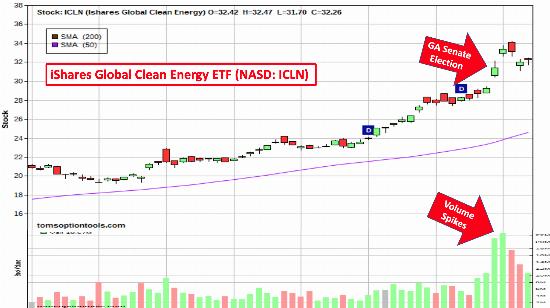 Now, trading the ETF long is a great way to profit on this green energy sector. The fund is managed by iShares, which include the “best of the best” when it comes to energy stocks. However, there a few leaders of the pack to consider…


PLUG is an American company that develops hydrogen fuel cell systems that replace conventional batteries in equipment and vehicles powered by electricity. This stock is the top holding of the ICLN ETF with a weighting of 8.6%. It’s pretty safe to say that it’s the star, rising 65% on a series of gaps on gargantuan volume since the election. It’s trading at an all-time high of $65 currently, and further upside appears imminent.

ENPH designs and manufactures software-driven home energy solutions that span solar generation, home energy storage, and web-based monitoring and control. This stock also gapped up big on the election news with massive volume and set an all-time high of $222.43. It’s currently consolidating at $200 support and poised for more upside.

Now, let’s talk about the second sector that skyrocketed on the news regarding the power-shift in the Senate.

It should come as no surprise that health care is the other major beneficiary of the Democrat-controlled senate due to the initiatives regarding public healthcare, as well as the continued care efforts of the pandemic and ongoing vaccine distribution.

As with the clean energy sector, the health care sector also ran up on the Georgia Senate election results after trading at $112.95 per share on January 4 to the high of $117.38 at the time of writing.

The XLV ETF is comprised of companies that specialize in pharmaceuticals, health care equipment, health care providers, biotechnology, and more. As you can see below, XLV ran up on the election news on above average volume, setting an all-time high of $118.13 in the process. 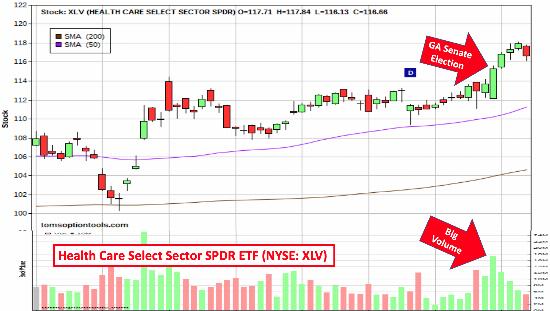 Although the ETF has great potential for an option trade in 2021, there are two stocks in this sector that are particularly well-poised to capitalize on potential Democratic health care programs.

CNC provides a portfolio of services to government-sponsored healthcare programs, focusing on uninsured and under-insured individuals. This stock shot up with huge volume on election news and is currently wrestling with $70 resistance and only a few dollars away from its all-time high of $74.70. A break above these levels could mean higher highs than we have seen before.

ABC is one of the world’s largest pharmaceutical service companies in the United States, Canada, and selected global markets with a strong pharmaceutical supply channel. ABC ran up to $112.48 with big volume on the election news and is a stone’s throw away from its all-time high of $120.58. It’s currently wrestling with $110 resistance, and once it breaks above this level, expect its all-time high to be breached with big upside.

All of the stocks listed above have great profit potential given today’s political climate. This shift in senate power is a great opportunity to add these option trades to your portfolio for maximum gain, all while remaining low risk.

The traditional ways of making money are old-school. And when you compare that old buy-and-hold strategy to the quick, lucrative returns from options, you have to wonder what other moneymaking techniques you’ve been ignoring.

Here’s the thing – most of what you know about money is a lie – whether it’s been told to you by Wall Street, friends, teachers, or even your family.

Once you debunk those lies, you can unearth the path to true moneymaking power.

That’s exactly what my newest colleague, Abe Wagner, did.

I have to say – I’ve seen a lot of success stories in my time as a trading expert. But none have been as inspiring as Abe’s.

He spent a rough childhood in foster care. He’s seen things that most people would never want to experience. He knows what it’s like to be truly, desperately poor.

But this isn’t a story of how he took multiple jobs, worked long hours, and busted his butt to make some real cash.

All Abe did was change the way he thinks about money. And now, he makes over $300K a month.

If you want to discover Abe’s secret, then sign up for his brand-new newsletter, Think Rich or Die Broke, right here. It’s completely free – and by signing up, you’ll receive information on everything Abe learned to get him where he is today.