There’s an old trading adage, “Sell in May and Go Away”. The idea is that stocks don’t perform as well between May and October as the rest of the year. From 1950 to 2013 that was indeed the case. Over this period the Dow Jones Industrial Average posted lower returns than in the November to April period. According to Forbes, between 1950 and 2013 the Dow averaged a 0.3% return during the May-to-October period versus an average 7.5% during the November-to-April period.

Here’s the thing about historical trends. They repeat except when they don’t. The truth is that no one knows for sure which way the market will head tomorrow. Predicting the future works that way. The trick is to find historical patterns that repeat the most and count on them repeating again.

So, with the “Sell in May and Go Away” adage busted, the question still remains, “Which way will the stock market go from here?”

And you guessed it, I have a downside play to recommend…

Basic technical analysis suggests that the market is very “toppy” and ready for a short-term retracement. 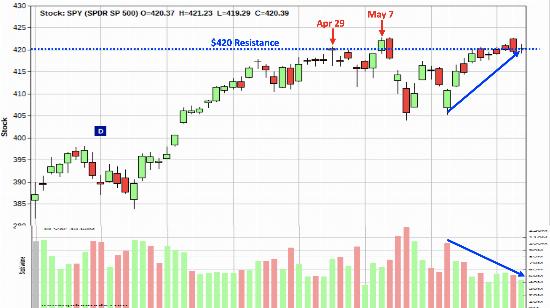 The SPYs have attempted to breach $420 resistance numerous times over the past month. But they haven’t succeeded until very recently….

After testing $405 support a few times, the SPYs then mounted a run up to $420 and have been turned away 7-times over as many trading days.

This recent run up has occurred on declining volume. Think of volume as power or conviction. You can then read the chart like this…

The SPYs have risen to strong $420 resistance on declining conviction. And with $420 holding numerous times, the tea leaves say that the party is over and a pullback is more likely than a continued rise above $420.

Of course, anything can happen, but this is a sound prognosis at least for the short-term.

Speaking of declining volume, one of the neat things about my revolutionary three-tiered software platform, BRUTUS, is that it can track big movements in volume in either direction.

The brute-force algorithms it employs have uncovered opportunities for 300% returns in 3 days… 650% in 8 days… even 2,500% in 16 days during the back-testing period. I’ve got all the details for you right here.

How We’ll Make Money on this Bearish Prognosis

Right now, my algorithms are strongly suggesting put options, at least for the short term.

As I’m sure you know by now… put options increase in value as the underlying stock drops. And you don’t have to spend much money on them.

Consider selling them for a double or if the SPYs touch $405 support.

If we’re wrong and the SPYs close a few points above $420, sell them for a small loss.