I’m about to clue you in to the most reliable trading pattern on the planet.

Surprisingly (or perhaps not so surprisingly) most people haven’t heard of it.

You’ve heard the saying, “What goes up, must come down”. There’s even a song by Tyrone Davis proclaiming it. It’s true for many things in life. It’s usually true for stocks. Nowhere is this more true than with a little known characteristic of a stock options value.

I’m talking about Implied Volatility (IV). This is the market’s forecast of how much (not what direction) an option is likely to move.

Welcome to the most reliable pattern in trading.

Here’s exactly how to make money off it next week.

Check out the IV chart for Coca-Cola (NYSE: KO) below: 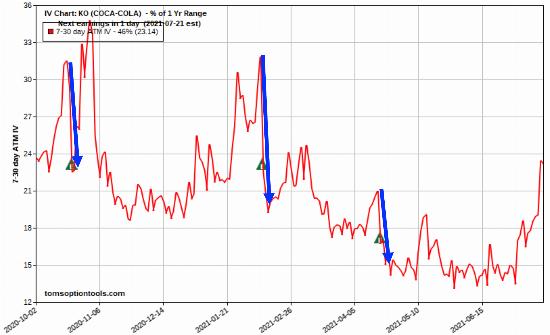 The green “E” triangles are earnings. Notice how the red IV line rises into earnings. As the red line rises, the value of KO options increases. That pattern is consistent and the cornerstone of my Surge Strike publication.

Option traders are willing to pay more for options right up into earnings in anticipation of a big move in the stock after the earnings announcement. Once earnings are announced and the news is out, the demand drops and so does the IV and therefore, the price of the options.

An option’s price is impacted by numerous things including strike price, time to expiration, and even interest rates. Option prices are also impacted by the demand for the options. As demand increases, so does the price.

The opposite is also true. IV crushes can increase the value of an option even if the stock doesn’t move. That means IV crushes can turn profits into big losses overnight.

That might all sound a little complicated, but it’s actually pretty easy to use this pattern to make big, short-term profits.

Simply stated, sell options the day before earnings when they’re expensive, and buy them back the next day after the announcement for less when they’re cheaper.

Now, I’m not talking about selling naked options. This is risky and you could lose a lot of money if the stock moves big after the announcement.

I use credit spreads to hedge my risk.

Bullish credit spreads are constructed by selling a put at one strike and buying one beneath. Many call these spreads “Bull Put Spreads”.

For example, you could sell an XYZ 50 Put and buy an XYZ 45 Put creating a Bull Put Spread for a credit and keep the credit if the XYZ is trading at $50 or higher at expiration.

Bearish credit spreads are constructed by selling a Call at one strike and buying one at a higher strike. Many call these spreads “Bear Call Spreads”.

For example, you could sell an XYZ 70 Call and buy an XYZ 75 Call creating a Bear Call Spread for a credit and keep the entire credit if the XYZ is trading at $70 or lower at expiration.

The basic strategy is to sell credit spreads where you don’t expect the stock to go by expiration for high probability profits.

Put the two together and you have an Iron Condor.

As you can see in the IV chart above, IV had spiked up in anticipation of the announcement the next morning. Options were expensive and we knew that they would be cheaper the next day.

The statistical probability of profit was a whopping 95.8% over the 3-day period.

A risk graph really illustrates the power of this trade. Profit exists between the light-blue horizontal lines. If the stock stays between these lines after the announcement, you profit. It had done so for 3 months prior.

The next day, KO moved after the announcement, but stayed within the light-blue breakeven lines, netting a nice 1-day profit.

To recap this strategy, here’s what you do:

I have scanners that do all of this for me AND test the trades out historically.

Here are some coming up for next week: 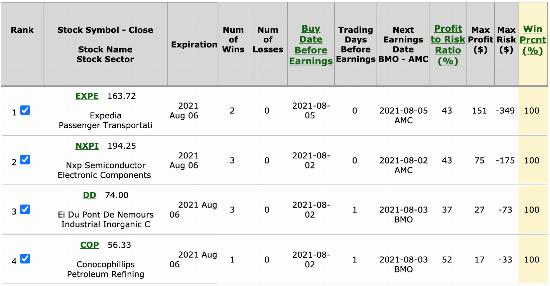 All of them have a winning track record and offer at least a 37% ROI at current stock levels. ROIs are subject to change.


Dive Headfirst into This Earnings Season’s Cash Current
We’re in the midst of a historic earnings season, and we’ve just isolated a way for you to plunge your hand deep into this surging current of money and pull out a fistful of cash. (Think: a shot at anywhere from 50% to 650% in a few weeks.) If you want to get in on this, you need to be ready before Monday, August 2. Go here for details.