Have you ever gotten a speeding ticket and a few days later been inundated with law firm notices offering to get you out of hot water? It’s the same thing for accidents. Legal firms scour public records looking to profit off the unfortunate. Some call them “ambulance chasers.”

Well, we can essentially do the same thing for stocks. Bad things happen to companies, even good companies. Poor earnings, SEC probes, lawsuits, and global pandemics are just a few of the catalysts that can tank a stock.

It just happened to Zoom Video Communications Inc. (NYSE:ZM). Just a few days ago on August 30, Zoom announced earnings after the bell. As a beneficiary of COVID-19, Zoom hit $1 billion in revenue for Q2.

Great news, right? Yes, BUT… Zoom lowered future expectations. The stock was taken behind the woodshed and spanked, dropping the stock from $347.50 to $289.50, a whopping 17%! 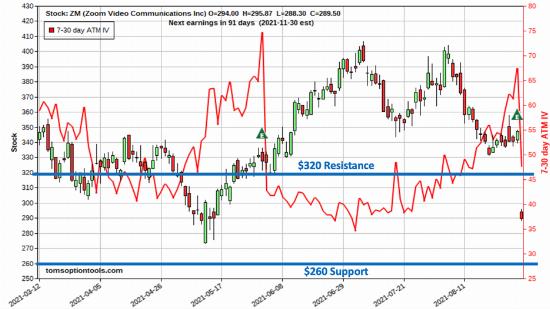 And I’m about to show you my six-step system to profits.

IV will rise and fall based on demand for the options and expectation of what the stock may do. Generally, IV and the stock price are inversely correlated. As stocks rise, IV drops and vice versa. Also, IV tends to rise into earnings (green “E” triangles) and drop after.

In the Zoom chart above, IV ran up into earnings. The poor news was announced, and IV dropped, but due to the tanking, the IV still stayed high based on the average IV range. As stocks settle down, IV ultimately drops, providing an excellent opportunity to profit.

Here’s an example: The pink legs shown below constitute the bear call spread that profits as long as ZM stays at or below $320 by October 1.

The green legs are the bull put spread that profits as long as ZM stays above $260 by October 1.

If ZM stays between $260 and $320 by October 1, both credit spreads expire worthless and the trade nets 42.27% over a 31-day period with exceptional probability of profit.

The above risk graph illustrates the profit/loss picture. The icing on the cake is that IV is still high and will drop as the stock normalizes.

Two days later, the stock went sideways and the IV dropped, leaving the iron condor at a 6.3% profit with more profit to go. 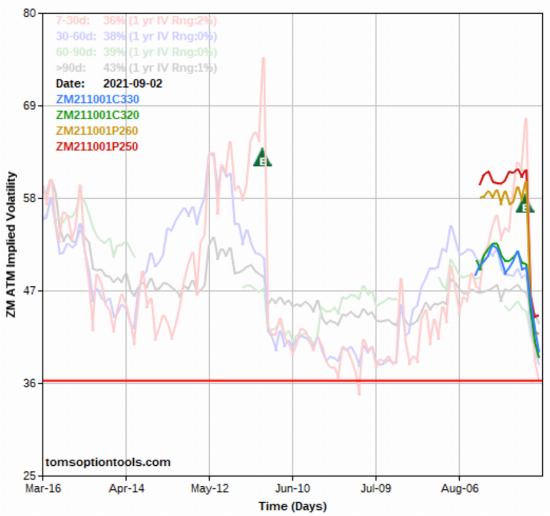 Managing these trades is simple. As long as the stock stays between the sold option strikes, let both spreads expire worthless. If the stock closes above the short call or below the short put, shut down the trade and cut losses.

And while there’s a lot of money to be made chasing the ambulance – with the right strategy…
Imagine being far ahead of that same ambulance.

Over the last two years, the market has fundamentally transformed with new money pouring into the markets every day from young, inexperienced traders…

They’re causing quite the ruckus… taking stocks on a roller-coaster journey like we’ve never seen before.

One that’s capable of predicting market movements before they occur.

I call it BRUTUS…

And there’s reason to get excited about the potential here…

Our backtesting showed that it’s capable of spotting powerful signals that can produce gains like:

That means a simple $1,000 trade on PennyMac Financial could have turned into $4,000 in just three days.