In yesterday’s video message, I explained why I believe the business with China and Evergrande Group will be a short-term blip for the stock market, and why we could see buyers start to trickle in again next week.

You see, I don’t listen to opinions about where the market is headed, because as the saying goes, Opinions are like — well… you know the rest. Everyone’s got one.

What I DO listen to is my Money Calendar tool, which is based on historical price patterns and years’ worth of data.

The past is often prologue when it comes to trading, and if I can identify trends in the numbers, I can often find an advantage.

So, what IS the Money Calendar telling us about where the market is headed?

Well, let’s just say… if the meme stocks on today’s Power Profit Trader Watchlist bounce next week, buyers of their cheap call options could be headed to the bank.

We’ll dive into those beautiful numbers more in today’s newsletter, and I may even discuss some during today’s LIVE SESSION at 10:30 a.m. ET right here — so get in the room!

Then, after I wrap at 11:30 a.m. ET, stick around for my buddy “The Voz” and her Volume Profile analysis, followed by a very special LIVE DEMO of Mark Sebastian’s never-before-seen proprietary software he developed with WallStreet.io CEO Micah Lamar.

It’s going to be an epic day!

Is a September Bounce In Store?

In a nutshell, my Money Calendar indicates that if we can get through this week — which is historically volatile — there could be sunny skies ahead.

Next week tends to be bullish for the stock market, so history suggests the buyers who abandoned ship amid the recent sell-off could find their way back to Wall Street next week. 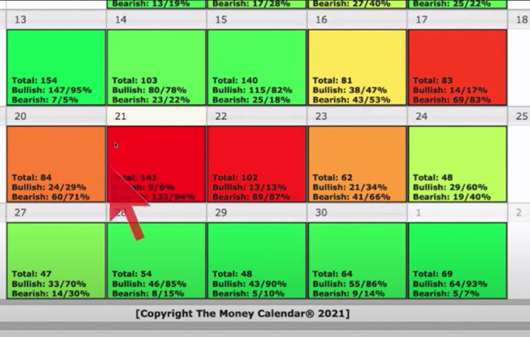 Supporting my theory that a rebound may be ahead — the markets held the majority of their early gains following yesterday’s Fed announcement.

While the Fed’s decision to leave short-term interest rates unchanged didn’t shock anyone, I was looking to see if there would be a “Sell the news” effect on the markets, which didn’t happen.

One could view stocks holding up against the Fed announcement as an indication the path forward is higher.

And considering the highs of not only September, but the year, were hit very early on in the month suggests stocks could be set for a comeback.

If that comes to fruition for the stocks on today’s Power Profit Trader Watchlist, call buyers who took advantage of this week’s cheap option prices could cash in.

That’s not to say I’m recommending buying calls on these stocks, necessarily — before you trade anything, you should do your own due diligence, and select options based on your expectations and personal risk appetite.

In fact, I just demonstrated in yesterday’s video how I use my tools to select the right options contract to achieve my desired risk/reward balance. 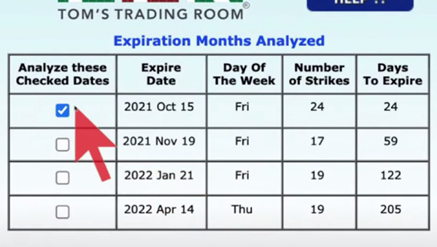 “Meme Stocks” Have Options On Sale

That said, today’s Power Profit Trades Watchlist is brought to you by the Morning Report Cheap IV list in the TG Suite app, which you can download here for iOS or here for Google Play.

Stocks on the Cheap IV list are there because the current nominal at-the-money (ATM) implied volatility (IV) is low relative to the range of ATM IV over the past year.

What does that mean?

Let’s break it down:

Higher volatility expectations (or IV) makes option contracts more expensive, because think about it — options on a volatile stock are more likely to move into the money (ITM) and become profitable, relative to a stock that just stagnates, right?

If you want a quick profit buying options, you want a stock that can MOVE before the option expires, not some snoozer that trades in a 5-cent range for days at a time… But usually you gotta pay up for that privilege.

Therefore, the stocks on the Cheap IV list below got there because data indicates their ATM options are priced at a relative bargain, compared to the past year. 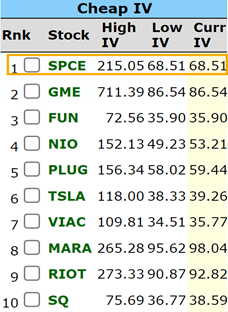 If many of the stocks on that list look familiar, it’s likely because they’re so-called “meme stocks.”

In a nutshell, a meme stock is one that’s seen excessive volume by going viral, like GameStop (GME) earlier this year on the WallStreetBets hype.

At the top of the Watchlist, actually, is none other than Virgin Galactic (SPCE), which was at the center of that insane space race between Richard Branson, Amazon’s (AMZN) Jeff Bezos, and Elon Musk of Tesla (TSLA) — also on the Watchlist (again).

Nio (NIO) has been called the Chinese Tesla, and its current IV is also at the low end of its range, suggesting ATM options are relatively cheap.

Will meme stocks surge next week on broad-market seasonality? We shall see, but if they do, it’s almost certain IV — and therefore option prices — will rise with them.

See you in the room!