If you haven’t heard, it’s a special week in Wall Street’s world, with quarterly earnings reports set to start pouring in — something my colleague Kenny Glick is excited to trade.

While earnings season typically creates natural trading opportunities for the folks who love volatility, it can also create ulcers for the buy-and-hold crowd.

However, today I want to demonstrate how you can utilize options to sleep better at night… And not JUST to insure your long stock positions against a negative earnings reaction, either.

What’s more, we’ll take a real-life example of some hedging we could be witnessing in the options arena around Ford Motor (F)…

And to do so, I’ll be delivering a DOUBLE WATCHLIST for Power Profit Traders today!

We’ll dive into another tool from the TG Suite app that all but confirms some Ford traders may be getting nervous — and what they’re doing about it.

Ford LEAPS Still No. 1 — But Are Bulls Hedging?

The reason I like to look at the Highest Open Interest list on Mondays is to get a feel at the start of the week for where the most action is and has been up to now.

Because LEAPS — or Long-term Equity AnticiPation Securities — are issued years in advance, it’s not surprising to see many of the options on today’s Power Profit Trades Watchlist don’t expire until January 2022 or 2023. 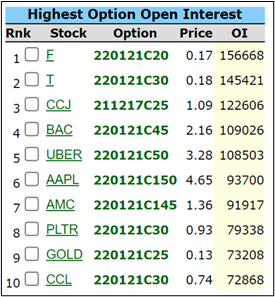 Traders could’ve opened those calls days OR months ago, but buyers are surely hoping F shares surge above the $20 strike in the fourth quarter.

As of Friday’s close, Ford stock sat at just $15.12, meaning the calls are still nearly 5 points out of the money (OTM).

Now, what was interesting to me was seeing a DIFFERENT Ford option pop up on a DIFFERENT watchlist from the Morning Report tool…

This data is updated after the closing bell each session, and tells us which specific options — not specific stocks — saw the highest daily volume. 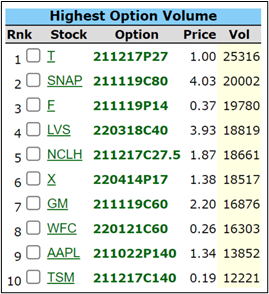 However, it wasn’t the LEAPS calls that garnered attention on Friday — it was Ford’s shorter-term, $14-strike put expiring Nov. 19, coming in at No. 3 on the list.

If those puts were bought to open, we could be seeing some near-term hedging among longer-term F bulls.

By purchasing a “protective put” — also known as a “married put” — holders of those LEAPS calls (or Ford shares, for that matter) could be buying options insurance.

This means they aren’t hoping F shares drop below $14, like a straight-laced, “vanilla” put buyer would be…

They’re hoping their original, bullish investment comes to fruition and Ford shares pop — the short-term put is in place only in case of a worst-case scenario before expiration on Nov. 19.

If Ford stock sinks below $14, the protective put buyer can either:

But just like with any insurance policy, they aren’t HOPING disaster strikes — just trying to sleep a little better at night during the heart of earnings season.

If Ford does, in fact, topple $20 by years’ end, the appreciation of those LEAPS calls (or F stock itself) should help to cover the cost of the protective put options.

That’s all for today, but make sure you jump in the room at 11 a.m. ET to watch me trade and dole out more timely lessons LIVE.