Don’t forget — I’m LIVE at 9:30 a.m. ET every morning RIGHT HERE, and if you aren’t attending these free sessions, you’re missing out on gems like Polkadot (DOT).

I talked up the crypto in a recent LIVE session, predicting the price to ultimately top its previous high of $49.50, which it just did.


In fact, I have really high hopes for the industry right now, because we’re on the cusp of a massive wave of new participants to the crypto craze.

I’ve been screaming from the rooftops that the 3G influx of interest in these currencies is going to be beyond huge for several reasons, and if you’re already a member of my Microcurrency Trader family, you know we have big plans to capitalize… (If you’re not already a member, it’s not too late… but the door is shutting, so get in with us or watch from the sidelines, your call.)

We’ll be talking a LOT about crypto as it all unfolds, but in the meantime, I want to briefly turn our attention back to earnings season and options.

Specifically, I want to show you how to use my TG Suite Morning Report tools to tell if a stock’s options are cheap or expensive.

Don’t Get Crushed By a Volatility Crush

Today and tomorrow, I’ll show you the difference between the stocks on the Expensive IV and Cheap IV lists.

Today’s Watchlist is based on the Morning Report’s Expensive IV tool.

A stock on the Expensive IV list means the current IV is at the high end of this 52-week range.

In other words, option premiums are running hotter than normal. 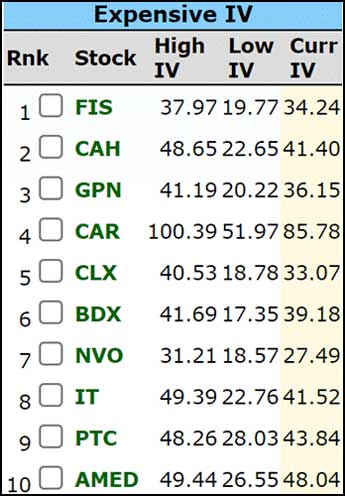 This higher-than-usual IV tends to happen when there is an expectation of a catalyst to propel the shares higher or lower.

That catalyst could be any number of things, like a drug approval, a new product launch, new management, OR ye olde earnings report.

I tend to stay away from buying options that have expensive IV — especially going into an earnings report, because as you will see tomorrow, once the earnings are reported the IV tends to fall off a cliff.

The “volatility crush” will make the options relatively cheap again, and that could wreck a directional long option, for example. No one wants to buy high and sell low!

Here’s a chart of ATM options on Fidelity National Information Services (FIS) — at the top of today’s Expensive IV watchlist ahead of the firm’s earnings before the open this Thursday: 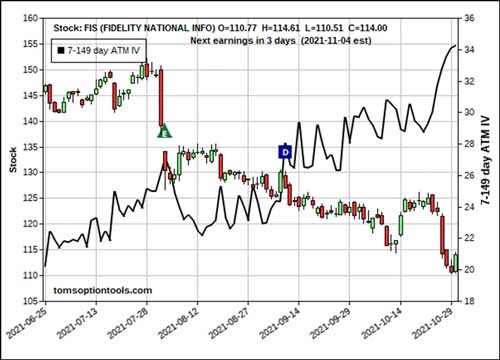 You can see how IV became expensive heading into the summer report (see the “E” triangle in green”) before plummeting immediately after.

The same will happen this Thursday, as Fidelity National Information’s release takes the guesswork out of direction.

So, I won’t be surprised if FIS emerges on our Cheap IV list on Friday…

In the meantime, make sure to get in the room and watch me LIVE at 9:30 a.m. ET — we have a lot to discuss, especially if you want to learn more about the tech revolution about to change the crypto game as we know it.