Remember — I’m LIVE at 9:30 a.m. ET every morning RIGHT HERE, and if you didn’t catch me yesterday, you missed one heck of a Cardi B impression (that’s real).

I was talking up money moves, of course, and how I plan to make plenty of ’em around the cryptocurrency insanity on the horizon.

Today, though, I want to continue yesterday’s discussion on determining whether options are expensive or cheap.

Specifically, I want to dive into how I like to make money moves with options around earnings, and when it usually pays to be patient as an option buyer.

I’ll show you an example of a popular tech stock that recently made a big move of its own on earnings, and how two traders might’ve fared using the exact same options strategy a day apart.

Trader A vs. Trader B

As promised yesterday, today we’ll look at the flip side of the coin and dive into spotting inexpensive options.

Today’s Power Profit Trades Watchlist is brought to you by the Cheap IV list from the TG Suite app’s free Morning Report tool.

Cheap IV means the current IV is at the low end of this 52-week range, meaning option premiums are relatively inexpensive at the moment, compared to the past year.

It should also be noted that I compare IV to IV to get an apples-to-apples comparison, compared to many other data sets, which compare IV to historical volatility (HV). 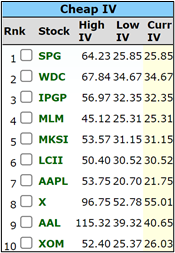 That said, I stated yesterday that IV tends to increase ahead of a known event like earnings — traders are willing to pay higher prices for options, because there’s a chance the stock could swing in their favor after the report.

On the other hand, IV deflates dramatically after earnings, in what’s known as a “volatility crush.”

It’s similar to the old stock market adage “Buy the rumor, sell the news” — once the FACTS are out (or earnings, in this case), the news (and appetite to speculate) loses its luster.

Because of that, I don’t like to buy options — or anything, really — when prices are hotter than usual.

Who likes to overpay for things? Nobody.

And because I don’t want to overspend, I often like to wait until AFTER earnings to be an options buyer, when I can get the contracts on sale and not have to guess at direction.

Take Western Digital (WDC), for example, which is on today’s Cheap IV list after the company reported earnings (green triangle on the chart below).

You can also see the stock’s price (the candles) and its options IV (black line), looking at contracts that are ATM and expiring within seven to 149 days. 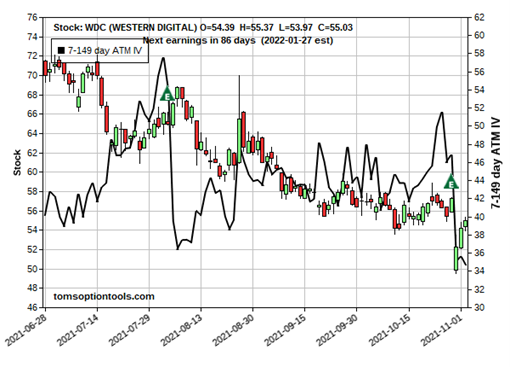 Now, let’s say Trader A expected Western Digital to top earnings expectations and for the shares to move higher.

If they’d bought ATM calls just before earnings, when IV was near a three-month high, not only would they have paid more than usual for those contracts… Trader A would’ve lost a lot of that premium in the subsequent post-earnings gap to the $34 level.

This goes to show just how DANGEROUS it is to buy — and even hold — options before earnings. And even worse, WDC shares gapped down DESPITE the company issuing quarterly earnings that beat analysts’ expectations.

They waited until after the earnings reaction, buying WDC’s ATM calls when the stock was trading around $34 after gapping lower.

By doing this, they not only bought when option prices were nearing rock bottom… They could’ve made some serious money moves on WDC’s subsequent rebound to the $40 neighborhood!

I think we have a clear winner, Power Profit Traders.

That’s all for today, but make sure to get in the room and watch me LIVE at 9:30 a.m. ET — we have a lot to discuss, especially if you want to learn more about the revolution set to change the crypto game.