Make sure you’re catching my LIVE trading sessions — the next one kicks off at 9:30 a.m. ET right here.

Not only will I divulge what I believe to be the No. 1 catalyst to push crypto to new highs (and it could happen before year’s end)…

I’ll also be giving away another week at my house in New Zealand!

You can catch glimpses of me even earlier on the Money Morning LIVE show at 8:30 a.m. ET. Today, in fact, I went over one specific retail stock that tends to do well this time of year, per my Money Calendar…

It’s what I’m calling a “Black Friday” trade, because you can put on a call spread for a lot less than it costs to buy the shares outright.

I may go over that trade in our 9:30 a.m. hour, but first — I want to dive back into something we glazed over last week when discussing the Bitcoin (BTC) and Ethereum (ETH) levels on my radar right now: Fibonacci retracements.

So today, let’s take a look at what these levels are, why you need to know how to plot them, and why they aren’t just applicable to cryptocurrency charts.

As a refresher, last week I recorded a video for you about where I believe BTC and ETH could find potential support, including Fibonacci retracement levels.

But what are these levels?

If you’re new to trading, you might’ve heard the phrase tossed around, or seen Fib levels in your charting platform toolbox, but you might not understand their significance.

I won’t bore you with an elaborate history lesson, but understand that Leonardo Fibonacci was an Italian mathematician from the 13th century, and in the titular Fibonacci sequence of numbers, every number is the sum of the two preceding numbers:

Yada yada yada — more math and some art later and you can see this sequence, as well as what’s known as the “golden ratio,” in spiral form all across nature.

You can also see it all across Wall Street.

Here’s the Bitcoin chart with Fib retracements I showed you on last week’s video:

Watch the full video here
To plot Fibonacci retracement levels after a rally, you would begin by clicking on the LOW and dragging to the HIGH point of the chart. (Note that I like to look at CLOSING lows, not wicks, to plot my levels.)

The low should correspond with a 100% retracement level, because a pullback of this magnitude would mean the shares forfeit 100% of their recent gains.

The high should correspond to a 0% retracement level.

The Fibonacci levels that populate between the low and high often emerge as levels of chart support on pullback.

For instance, last week I was taking a look at Occidental Petroleum (OXY), which populated on a recent Cheap IV list from our Morning Report tool from the TG Suite app. 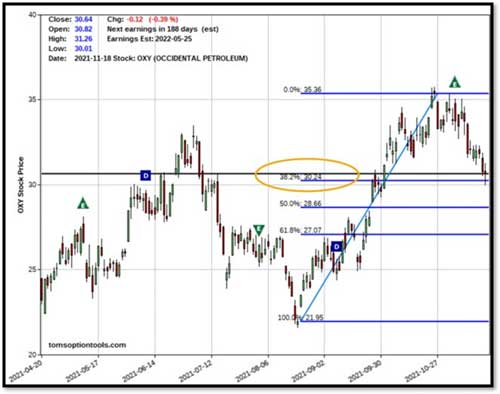 You can see on the chart above that after a rally off its August lows to peak above the $35 level, OXY has given back some of its gains… but could find a floor around $30, which represents a 38.2% Fibonacci retracement of that rally.

On the flip side, if a stock has taken a nosedive on the charts, you could plot Fibonacci retracement levels going the other way — that is, clicking on the HIGH (100%) and dragging to the LOW point (0%).

In this instance, Fibonacci retracement levels could tell you where potential resistance levels are on a stock that has tanked and bounced.

That’s all for now, but be sure to get in the room at 9:30 a.m. ET sharp for more LIVE trading lessons and an update on the prospects for crypto… and don’t forget New Zealand!