Perhaps I’ll discuss the cryptocurrency INSANITY we’re about to witness, and the SEC decision that surprised me (in a good way)…

Or maybe I’ll just perfect my Cardi B impression, as I know many of you got a kick out of that last week – LOL.

The only way to know — and perhaps use that knowledge to make money on your own, which is always my goal — is to be in the room at 9:30 a.m.!

In the meantime, however, I want to break down something interesting I saw last night in my Morning Report tool, which is free to my Power Profit Traders via the TG Suite app. (Instructions how to download and use found here.)

Specifically, I witnessed a dichotomy you don’t see too often in the option pits…

So today, let’s dive into the Sector Battle I’m seeing in the Entertainment neighborhood.

The situation I’m alluding to regards two stocks in the Communications sector — particularly, in the entertainment world: Comcast (CMCSA) and ViacomCBS (VIAC).

Both companies have already reported quarterly earnings for the season, and both stocks have been trending lower over the past several weeks.

CMCSA has been stair-stepping lower since briefly topping $60 in late August/early September, closing yesterday around $53… 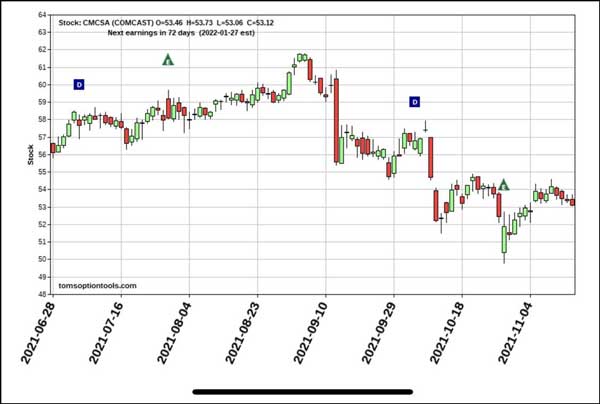 CMCSA chart courtesy of Morning Report
And while it’s been a less choppy downturn for VIAC shares, it’s been a downturn nonetheless.

The shares have dropped more than 10 points since their late-June highs, closing yesterday at $35.15, and it’s hard to believe this former “meme stock” briefly topped the century mark back in March. 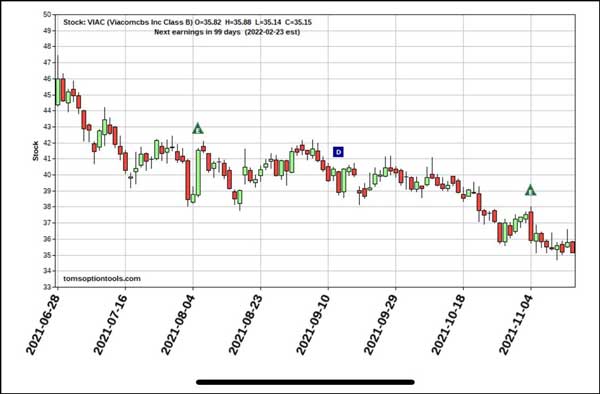 Buyers of the calls expect Comcast shares to rebound and move north of $52.50 before the standard monthly options expire on Friday, Dec. 17. 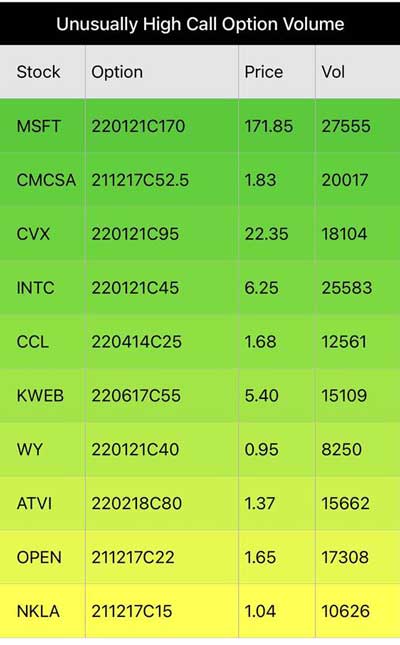 With VIAC shares trading around $35, these puts are already more than 7 points in the money (ITM), which explains why the contract price on the Put Volume list was a healthy $8.

Buyers of the puts expect ViacomCBS stock to extend its decline south of the $42.50 level into the new year. 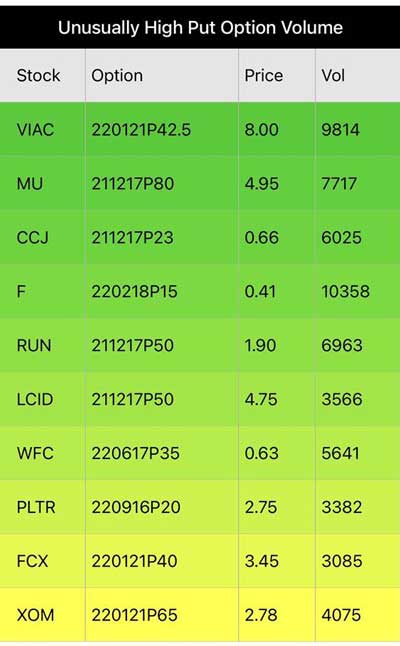 It’s entirely possible that both of these trades work out, due to the difference in times to expiration, but this is an interesting study and goes against what we usually see, which is, “When one stock in the sector gets the measles, they all do.”

In this case, it looks like these two were quarantined.