It’s been a bumpy few days for the stock market, after our recent run to record highs.

I’ll get to that in just a minute, but when stocks are swinging wildly like this, it’s more important than ever to catch Team Tom LIVE at the open at 9:30 a.m. ET right here.

It’s also more important than ever to not have all your eggs in one basket, as we discussed earlier this week.

I mean, while several buy & hold stock traders might’ve taken it on the chin Wednesday, look at just some of the gains made in the crypto world, per data from Coinbase:

Nov. 10, 2021 data – courtesy of Coinbase
You see, there’s always money to be made SOMEWHERE — IF you know where to look.

Unfortunately for one group of option traders, though, they could also be facing some heartache after getting burned on earnings…

Which is a lesson we’ll review right now.

The reason I’m sticking to the Unusually High Put Option Volume list for today’s Power Profit Trades Watchlist is because I wanted to see where traders were placing their bets during yesterday’s inflation-inspired sell-off.

In case you didn’t hear, the Consumer Price Index (CPI) skyrocketed 6.2% year-over-year in October, marking the biggest 12-month gain in more than 30 years (since December 1990).

On a month-over-month basis, the 0.6% increase was bigger than the 0.4% uptick expected by economists.

Food prices spiked 5.3% from a year ago, which has really been killing my grilling buzz. You all KNOW I love my fine steaks and bacon!

What’s a bit unsettling is that core increase essentially wiped out the increase in worker wages during the same time period.

While I don’t think the inflation data is going to put an end to the bull market, I could see it potentially causing things to stall, like we’ve seen this week.

But like I said, there’s always a way to make money, despite the market environment — whether that’s in alternative wealth assets like cryptocurrencies, or by buying put options on stocks moving lower… or expected to.

When the Nasdaq paces a market drop, I often take a look at put options that were popular on Nasdaq-listed stocks that day, which can tell me where bearish-sided money may be flowing. 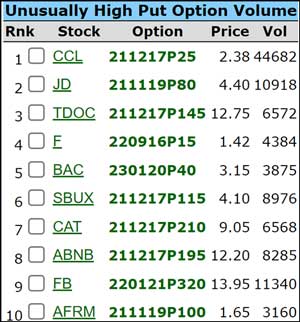 It’s the latter stock I want to discuss today. Or, rather, the popularity of the AFRM $100-strike put expiring next Friday, Nov. 19.

See, Affirm Holdings reported earnings after the close yesterday — meaning that put activity occurred before the report was released.

“Vanilla” buyers of the AFRM put were essentially expecting the shares to nosedive south of the $100 strike after earnings — or, at least before options expiration next week.

But then, look where AFRM stock went after the company reported stronger-than-expected earnings and well-received partnership news with Amazon: 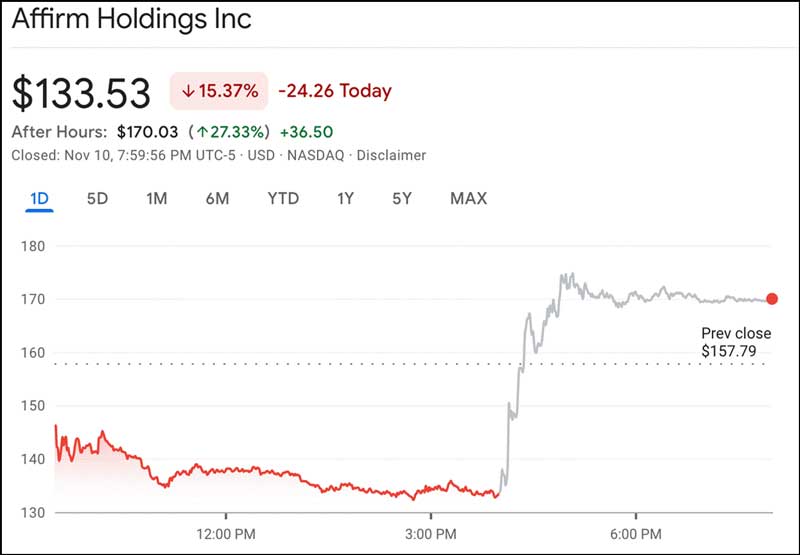 Of course, anything could happen and AFRM could give back those gains — especially in this wild market — but assuming the general direction doesn’t change, that means three things for those put buyers:

The lesson here is, once again, that if you’re going to buy options around earnings, it usually pays to be patient and wait until the contracts are on sale and the direction is more clear.

That’s all for now, but be sure to check out my video update, if you haven’t already, and then hop in the room at 9:30 a.m. ET for another LIVE TRADING LESSON with Team Tom!