The crypto market was off to the races in October, but over the past week we’ve seen a cooling-off period.

While some may argue, “But Tom, I thought you said these cryptos could explode?”

Well, I did — and I still believe they will.

An uptrend is not a straight line, folks — in fact, it can be very healthy to have pullbacks, especially when you have long-term bullish prospects.

Pullbacks present buying opportunities, if you time them right.

Which is why I recorded a video for you about the potential buying opportunities I’m seeing in two popular cryptocurrencies right now.

You can watch the entire video — which I’m calling “Hold That Line!” — right here, but I’ve also outlined a lot of my analysis below… including the signal we DON’T want to see anytime soon.

In my video, I discuss Bitcoin (BTC) and Ethereum (ETH).

Both surged higher after making their October lows, but since peaking less than two weeks ago, they’ve given some back on the charts.

The question now is — where could they find support? 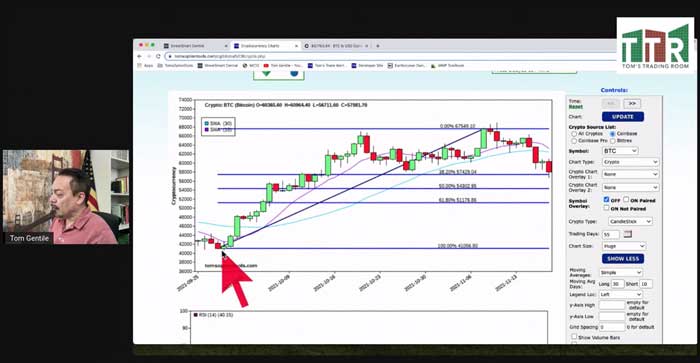 I discuss BTC Fibonacci levels around the 1:08 marker
Looking at a 55-day chart, which takes us back to those October lows, I plotted it out based on BTC’s closing lows and highs — and I ONLY use closing (wicks belong on real candles) — of about $41,056 and $67,549, respectively.

As of my video, BTC had already penetrated the 38.2% Fibonacci level, which roughly coincides with a previous area of support.

It’s the same deal with ETH.

Ethereum also just penetrated its 38.2% Fibonacci retracement level around $4,045 — but not yet on a CLOSING basis. It’s too soon to tell whether this area will hold. 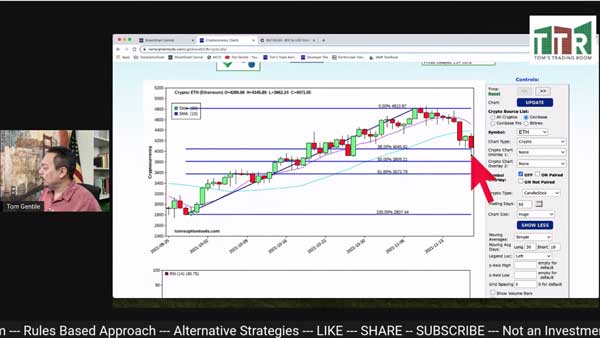 I would be looking to add to my position if ETH marks a pivot point and begins to bounce off one of these lines. 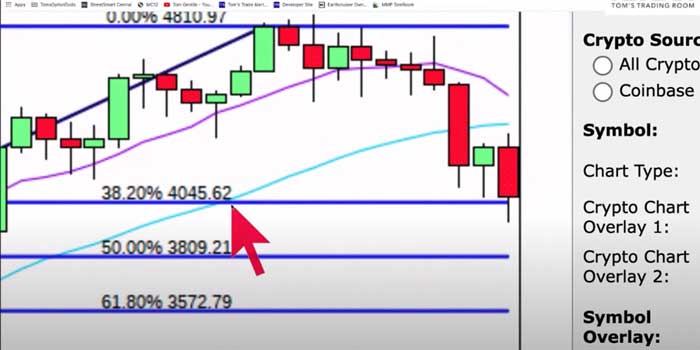 However, IF these Fibonacci support levels are going to hold, we need two things:

Specifically, the 10-day and 30-day moving averages that I follow closely give me bullish and bearish signals as they cross.

The last bullish signals for BTC and ETH were in early October, just before the rally.

Now, they’re going in the wrong direction, which is converging towards each other once again. 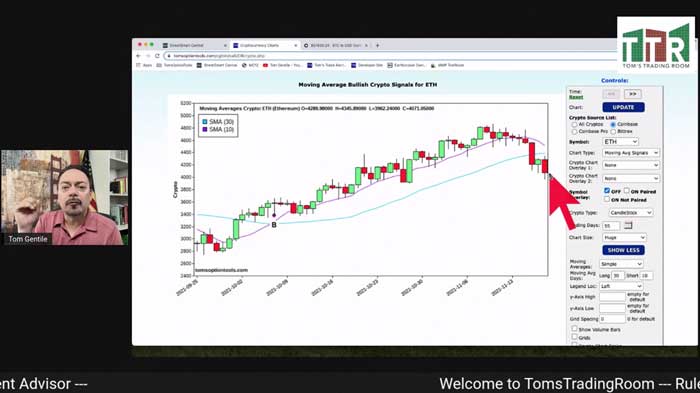 Check out the moving average signals at the 3:50 marker
If these trendlines do, in fact, cross, it would tell us that BTC and/or ETH aren’t yet ready to start tackling all-time highs.

Again, that’s not to say they WON’T get there — you all know how stoked I am about the fundamental prospects for crypto — only that it’s not time YET.

Have a great weekend, and I’ll see you at 8:30 a.m. ET Monday for the Money Morning LIVE show!