The stock markets soared to start last week, only to bobble along through to the end – managing to eke out a gain overall.

Then in the coin markets, there have been a lot of upheavals, with plunges and recoveries among the leaders of the markets. But which coins are the ones to buy, and which ones are to be avoided?

I could touch on that and more at the open – it all starts at 9:30 right here!

And in today’s Power Profit Trades newsletter, I will discuss one of the longest-running historical tools for technical analysis for any and all markets – including cryptocurrencies – based on the mathematical work of the 12th-13th century mathematician Leonardo Bonacci, more commonly known as Fibonacci (or as many in the financial markets call him, Saint Fibonacci).

In addition, I will outline a particular coin that I’ve been researching and analyzing for my Microcurrency Trader squad – it’s one of the leading coins for the online electronic gaming community, and something I might touch on in today’s 9:30 a.m. ET session.

The coin has been retracing its price movements recently – similar to Bitcoin (BTC) – with the overall drop in the coin markets pointing to an appealing entry opportunity.

And with the help of Saint Fibonacci and his mathematics, you too can spot when stocks or other assets could be setting up for a turnaround on the charts.

Fibonacci By the Numbers

Fibonacci’s father was an Italian merchant who also served as a customs official who began his son’s fascination with numeracy. He studied numerical systems and many other subjects as he traveled throughout the Mediterranean, both on the European and African sides. He became convinced that the Arabic numeric system was superior to that of the Roman numerals for calculations, as well as for general use.

Fibonacci would go on to advocate the use and adoption of our now-common base numerals 0-9, and in 1202 he would write and publish his seminal Liber Abaci that became a widely accepted and utilized discussion of Arabic numeracy and mathematics.

His work would go further to identify patterns in nature, from biology of reproduction of species to the form and structure of nature and its flora and fauna.

And this caught the attention of the leadership of Pisa, in what is now Italy, whereby the city-state would award him honors and even employ him for various general consultations.

His work would go on and be adapted to what we in the financial markets now use regularly – known as Fibonacci retracements, they’re used for numerous technical analysis systems and applications, including for Elliott Wave trading patterns (you know I love those!) from the work of Ralph Elliott, as well as other systems and pattern identifications.

And for traders – both technicians and even fundamental-based – the retracement levels are noted and used universally for identifying trading levels of importance.

Fibonacci retracements are simply percentage changes in prices from a starting point to an end point during a given time.

In my Microcurrency Trader, Saint Fibonacci’s work continues to drive much of my trading, telling me when entering and exiting positions might be in my best interest.

One of my latest coin trades that I outlined in my recent special session last week is in Enjin Coin (ENJ). 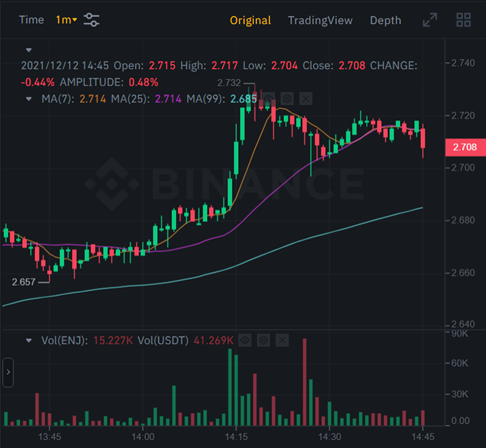 Caption (centered, italicized): Enjin Coin (ENJ) in US Dollars – Source: Binance
Enjin is based on one of the biggest competitors to Bitcoin – Ethereum, which is another blockchain accounting-based coin that is increasingly used by gaming companies and their customers to use within gaming systems, including for virtual stores and other products.


It also is increasingly being adopted for use in Non-Fungible Tokens (NFTs) that allow digital and digitized physical assets (think artwork, sports memorabilia, and other desirable items) for basing transactions and investments.

In my special LIVE SESSION last week, I showed my Fibonacci retracement work on Enjin that you can see here:

You can see that Enjin is setting up to hit a crucial Fibonacci retracement level, and from my analysis, could pivot to the upside…

And if it doesn’t, my Microcurrency Trader crew knows exactly where I might exit (Hint: It’s another Fibonacci retracement level).

If you’re new to Microcurrency Trader and the crypto world in general, don’t worry – I’ve created two extremely helpful reports for members, including one on how to set up your Coinbase or Binance trading account, as well as a Quick-Start Guide.

These two reports will begin your education on how to make the most of my Microcurrency Trader trades for profiting safely from cyber coins right now.

Have a great week!