It’s the final day of trading for January, and needless to say, it’s been a bumpy start to 2022.

Not just for the stock market, but for cryptos too.

However, in today’s Power Profit Trades LIVE session – at 11:30 a.m. ET right here – I’m going to take a look at what I’m seeing in the digital asset space right now, as we look to stabilize.

I’ll fill you in on a few cryptocurrencies I’m watching with my Microcurrency Traders, including outperforming Polygon (MATIC) and the position I just bought “on sale” last week.

I also want to break down a notable op-ed that recently compared the crypto volatility to the subprime mortgage crisis.

The author claims regulators once again “failed to protect the public against financial products nobody understood.”


However, I plan to pick apart that argument LIVE in my 11:30 a.m. session today, and explain why my Microcurrency Traders are better positioned than the average investor to navigate the market chop. (Speaking of the chop, I’ll also touch on the options strategy that’s been working best for me in this particular market – a strategy I’ll review in-depth in tomorrow’s LIVE session.)

I’ll also explain why that headline may actually be GOOD news for crypto traders, and we’ll dive into the two trendlines coin traders should have on their radar right now.

So join me at 11:30 a.m. ET today, and make sure you bring your crypto questions for my Q&A at the end! I’ll be answering from chat LIVE before I unveil today’s top trade idea…

Before we begin, remember – nothing is a guarantee in trading, even with some of the best patterns and strategies out there.

However, the key is to keep your allocations small enough that you can sleep at night – whether that’s trading stocks, options, OR cryptocurrencies.

As you develop your portfolio into more strategies and asset classes, you can then flex your muscles as a trader and utilize whatever angle works best for you in various market environments.

That said, I still like to rely on my handy dandy patterns and proprietary algorithms to give me the best advantage, and one that I use frequently with Microcurrency Trader is the currency wave. (Again, I’ll be reviewing these in my 11:30 a.m. ET session today, so make sure you get in the room or check out the replay later.)

My algorithm not only spots patterns – it spots something called fractal waves, which are unique mathematical patterns that infinitely repeat themselves. They exist everywhere – including the microcurrency markets.

The first wave is a corrective wave that mainly moves up and down, indicating a price correction. The shorter-term wave is what I call an impulse wave, which basically keeps heading up in a straight line to indicate a bullish move.

Without getting too deep into the nitty-gritty, when I see these two currency waves cross, I often make a move.

For instance, back in October, I pointed out that although SKALE (SKL) was one of the most volatile coins in the market, its last three currency wave crosses resulted in gains of at least 100% over the subsequent 4-8 weeks. 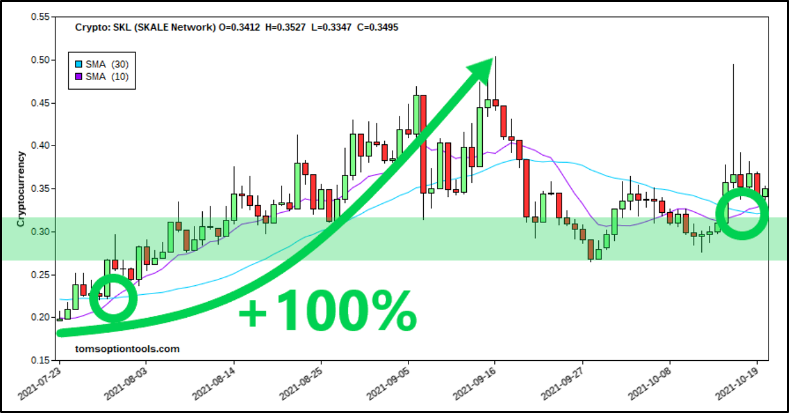 SKL chart with currency waves from October 2021
You can also see the currency waves in action on Dogecoin (DOGE), which I also mentioned to Microcurrency Traders back in October.

The volatile price action of the “meme coin” was marked by currency wave crosses – a bullish cross at the start of the year preceded a whopping 1000% rally, while a bearish cross preceded a 50% pullback (the gray area marks where Coinbase finally listed DOGE), and so on. 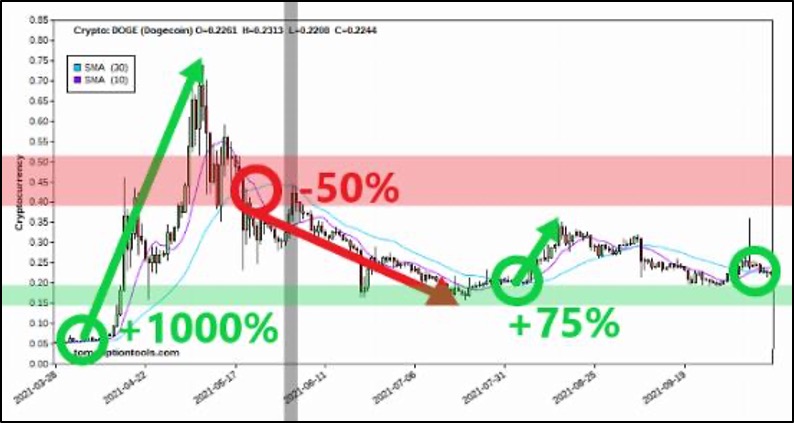 DOGE chart with currency waves from October 2021
In other words, none of the price swings were random; every major price increase or decrease was first marked by a currency wave signal.

I teach and trade these signals all the time in my Microcurrency Trader universe – in fact, I’m holding a private LIVE session for that crew at 1 p.m. ET today, so if you’re a member, watch for an invite in your inbox.

Make sure you’re in the room as I go over this – and a whole lot more – at 11:30 a.m., and then circle back at the same time tomorrow when I’ll dive into the options strategy firing on all cylinders amidst the volatility.

See you in the room!