Unfortunately, I’ll be out of commision today, as my wife wants to have a belated anniversary celebration (which we had to postpone due to our recent illnesses)…

And as I told you in yesterday’s LIVE Power Profit Trades session, as to why I have a home office outside of my actual home, “It’s what my wife wanted, so it’s what I did.”

However, just because I’m playing hooky from the camera this morning doesn’t mean I don’t have something juicy for you to sink your teeth into.

In fact, today I’d like to review my outlook for the stock market in 2022, and provide my fundamental and technical analysis on a handful of major stocks and sectors.

And a whole lot more…

So make sure to catch the entire replay of yesterday’s LIVE session right here, and apologies for being out today, but as you know – family first!

My Take on 5 Key ETFs – And Which Are Value Plays

We began yesterday’s session talking about the SPDR S&P 500 ETF (SPY), which essentially reflects the broader S&P 500 Index (SPX) and acts as a stock market barometer.

My outlook for the short term, at least, is bullish, and my Money Calendar for January supports that.

Yes, I know – the past week was a little nutty. But NOW it seems we might be seeing the BTFD (Buy The Friggin’ Dip) crowd streaming back into the markets… 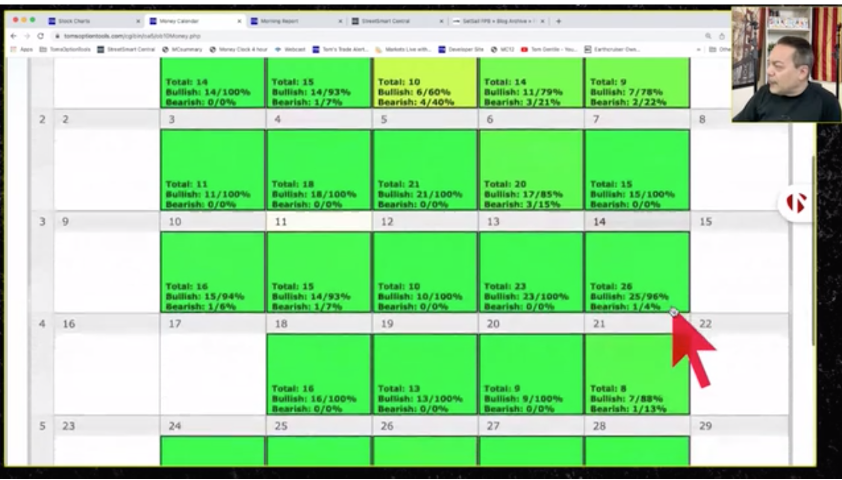 The Money Calendar for January is rife with bullish opportunities

What catches my eye about SPY technically is the “inverted hammer” candlestick pattern that we saw around the ETF’s recent lows… and that preceded a rocket higher for the shares.

Well, we just saw another inverted hammer – when the close is near the high of the day – this week.

That tells me that, although nothing in trading is a guarantee, the SPY seems keen to climb out of the gutter. 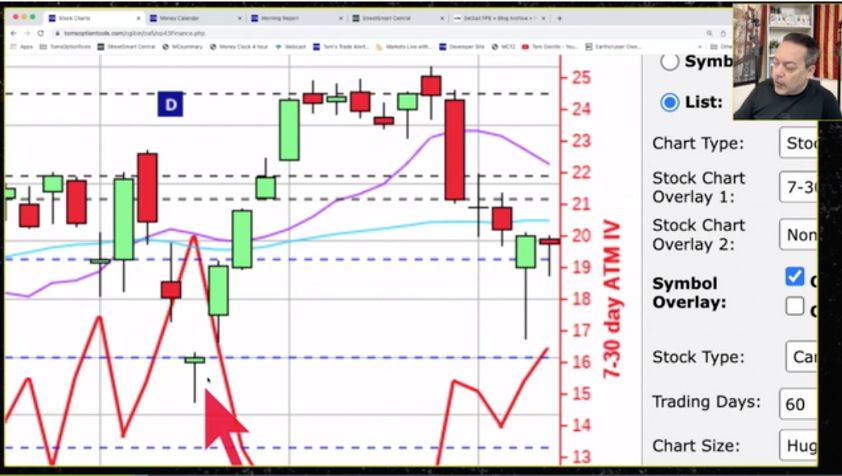 Moving onto the bond market… The iShares 20 Plus Year Treasury Bond ETF (TLT) was hammered to start the year, but did a complete reversal Monday.

In order for stocks to advance, even if only slightly, stocks and bonds need to move together. 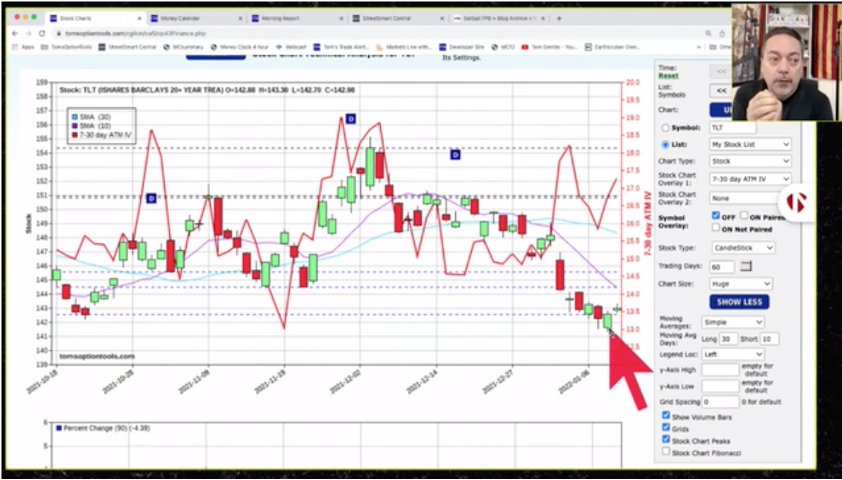 TLT has dropped a bit since its December peak

The real question for bonds and TLT is WHEN – not IF – the Fed will raise rates, and by how much.

I don’t subscribe to the popular opinion that the Fed will raise rates in the NEAR term, personally, and so far, Fed Chair Jerome Powell has done a good job of not getting too far ahead of himself, using the “we’re thinking about THINKING about raising rates” language.

Meanwhile, in the world of commodities…

I like to think of oil as a high tide helping to lift the general stock market. The two are often pretty closely aligned.

So it was encouraging to see the United States Oil ETF (USO) snap its recent losing streak. 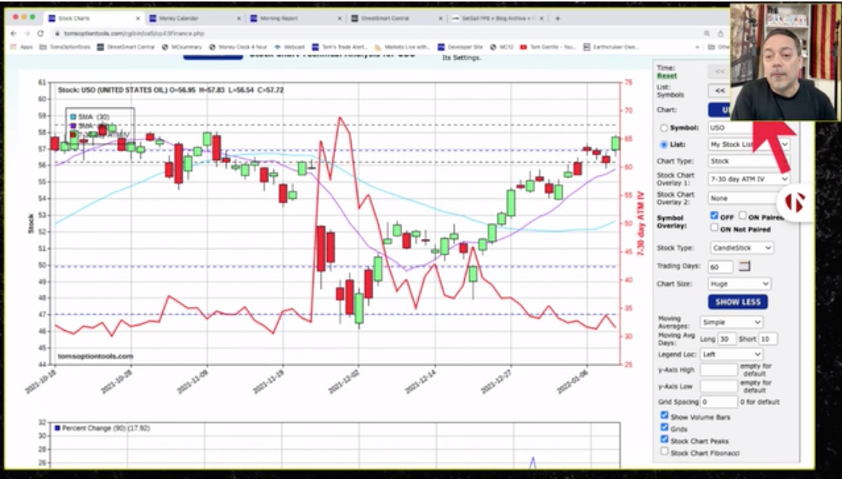 USO is approaching its November highs

But even more encouraging is what I see – or, rather, what I don’t see – in gold right now.

I like the SPDR Gold Trust (GLD) a lot, partly because it’s something no one is talking much about. And I think it’ll remain under the radar – at least, as far as the mainstream media is concerned – until GLD hits $125. 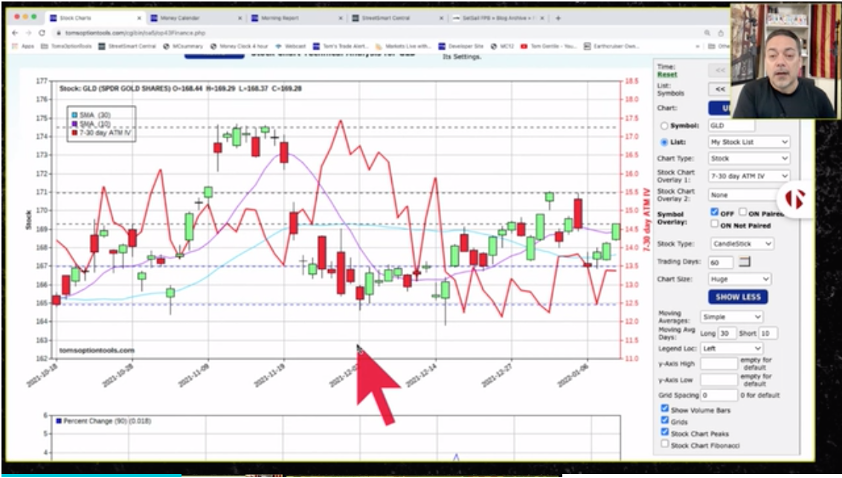 GLD IV is near the low end of its range

My team and I strongly consider GLD a VALUE PLAY for 2022.

Someone in chat yesterday asked me how I’d play it, and to answer that, I’d direct you to the solid red line on the chart above.

That line measures implied volatility (IV) on GLD options, and in the simplest terms, the higher IV is, the more expensive options will be.

That’s why, as an options buyer, I’m usually looking for stocks or ETFs on my Cheap IV tool from the Morning Report – the basis of today’s Power Profit Trades Watchlist. 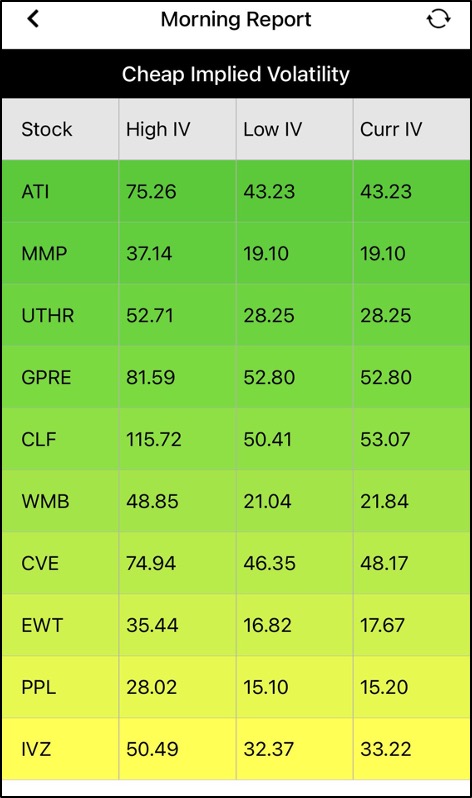 Rounding out the ETF is the almighty Invesco QQQ Trust (QQQ) – a fund that provides exposure to some of the biggest stocks in the world, especially on the tech side.

And drilling down into my Money Calendar data for today, QQQ appears at the top of our list, ranked by Power Meter. 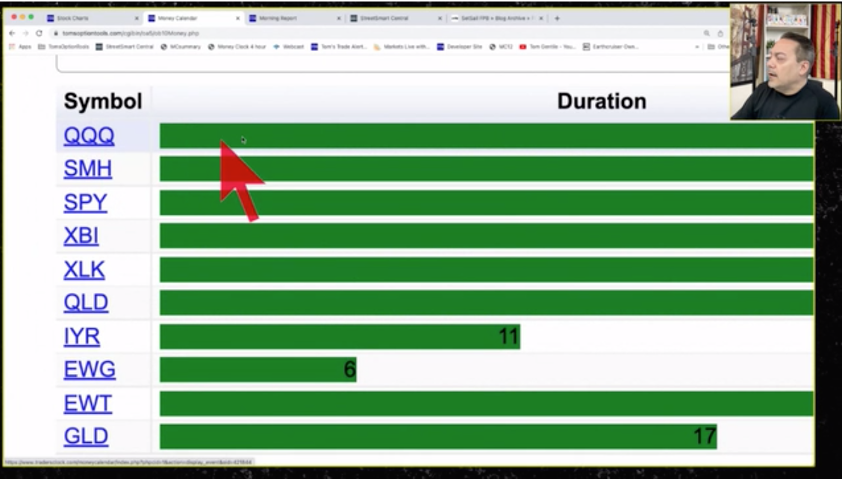 QQQ is showing strong seasonal trends, per my Money Calendar 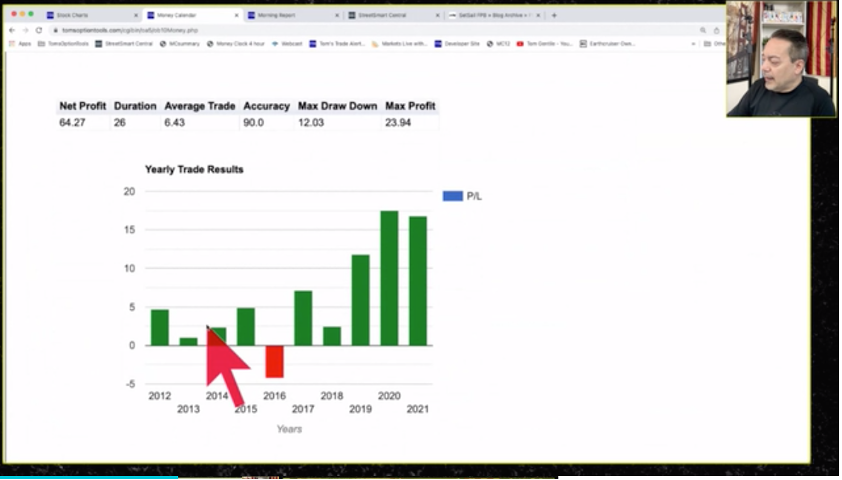 So, now that I’ve spotted the seasonal opportunity, how might I create an alternative-risk trade?

But considering QQQ’s IV is in the middle of its recent range, meaning options aren’t TOO expensive, I could also just buy QQQ call options outright…

However, if I’m looking for, say, a $10 average move higher in the next few weeks – it wouldn’t make sense, mathematically, to pay $11.25 for at-the-money calls.

In order to lower my initial entry, breakeven, and overall risk on the trade, I could instead opt for a bull call spread. 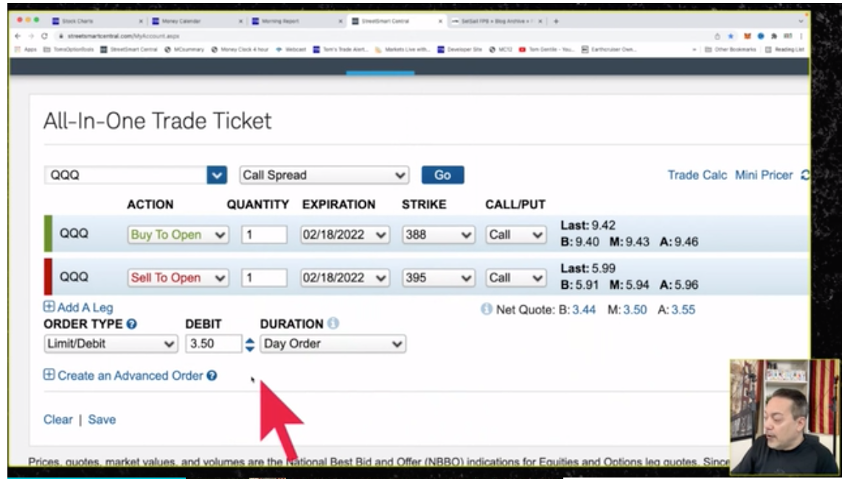 For instance, if I expect QQQ to move from $385 to $395 before February options expire, I could:

If I entered that spread for a net debit of $3.44, that leaves me the opportunity to DOUBLE MY MONEY, since the debit is less than half of the distance between my call strikes ($7, in this case).

That’s all for now, Power Profit Traders, but check out the entire replay of my LIVE session right here!

And tomorrow, we’ll follow this up with a look at my favorite and least favorite FAANG stocks, as well as my 7 Keys to Trading Success.

Talk to you soon!