Well, after starting February strong, the Nasdaq Composite (IXIC) suffered its worst day since September 2020 on Thursday, while the S&P 500 Index (SPX) had its worst session in almost a year, as traders digested the latest round of earnings.

It’s enough to turn the stomach of a lot of the new kids on the trading block – the ones who came in via the Robinhood Revolution I’ve been discussing all week.

BUT, as they say, one man’s trash is another man’s treasure, and the recent market volatility is, indeed, a treasure…

IF you have the right guidance, education, tools, and strategies in your pocket.

In fact, as stocks were swimming in the red yesterday, my Operation Surge Strike members were cashing in on a couple of profitable options trades on Ford Motor (F) and Las Vegas Sands (LVS).

Unlike a lot of the Robinhood crowd, who’ve only ever bought and held stocks for profits amidst a raging bull market, savvy options traders are not just surviving, but profiting from this chop.

If you’re brand-new to trading – or options trading, at least – perhaps you’ve heard “calls” and “puts” bandied about, but don’t necessarily understand what they are or how they work.

And I get it – trading jargon can be intimidating at first, so I don’t blame anyone if it’s been background noise up to this point.

However, in this volatile market environment, it’s a MUST that you learn about options trading if you want to stay in the game.

These vehicles not only provide leverage and an ability to speculate on an expensive stock at a fraction of the share price, they allow you to be nimble and make money no matter the temperature on Wall Street.

So today and next week, I want to take it back to basics and introduce you to a handful of options strategies for every market…

Bullish strategies, bearish strategies, and even one strategy I use in Operation Surge Strike designed to make money from a big move in EITHER direction.

Buying a call option gives you the right – not the obligation – to buy 100 shares of the underlying stock at a specific price (called the strike price) before a specific date (the expiration – typically at the close on a Friday). 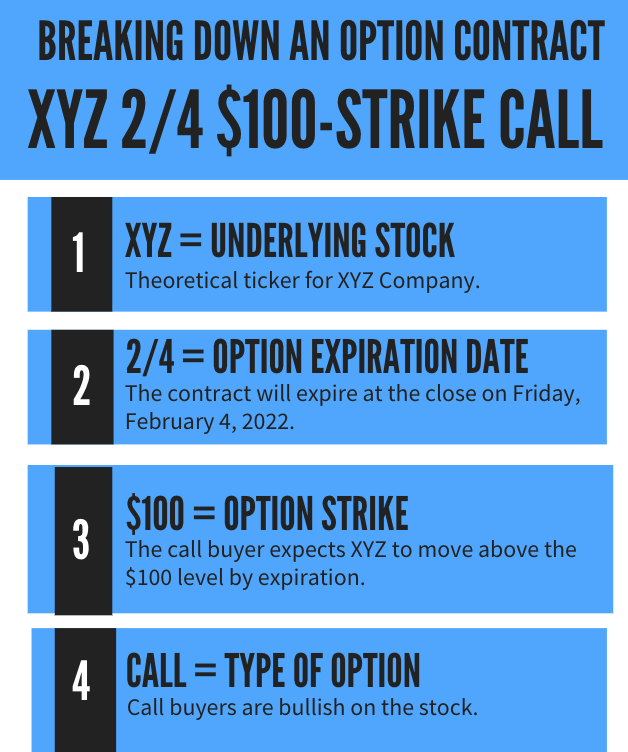 If the underlying shares move above the strike price before expiration, the call is considered in the money (ITM), and the buyer can choose to either sell the option to close for a profit, or exercise that option.

Should they exercise the call, they can buy 100 shares of that stock or ETF at the strike price, which would be like buying it on sale.

So, in a nutshell, someone simply buying a call (called a “vanilla” trader) is bullish; they want the stock to move higher. In fact, the higher the stock moves north of the strike, the more money the buyer stands to make.

If the underlying shares stay stagnant or move lower within the call’s lifetime, the most the buyer can lose is the initial premium paid for the contract.

But what if you’re bullish on a stock, but implied volatility (IV) is running too hot – like the stock’s on today’s Expensive IV list from the Morning Report tool – and you don’t want to overpay or risk that much capital? 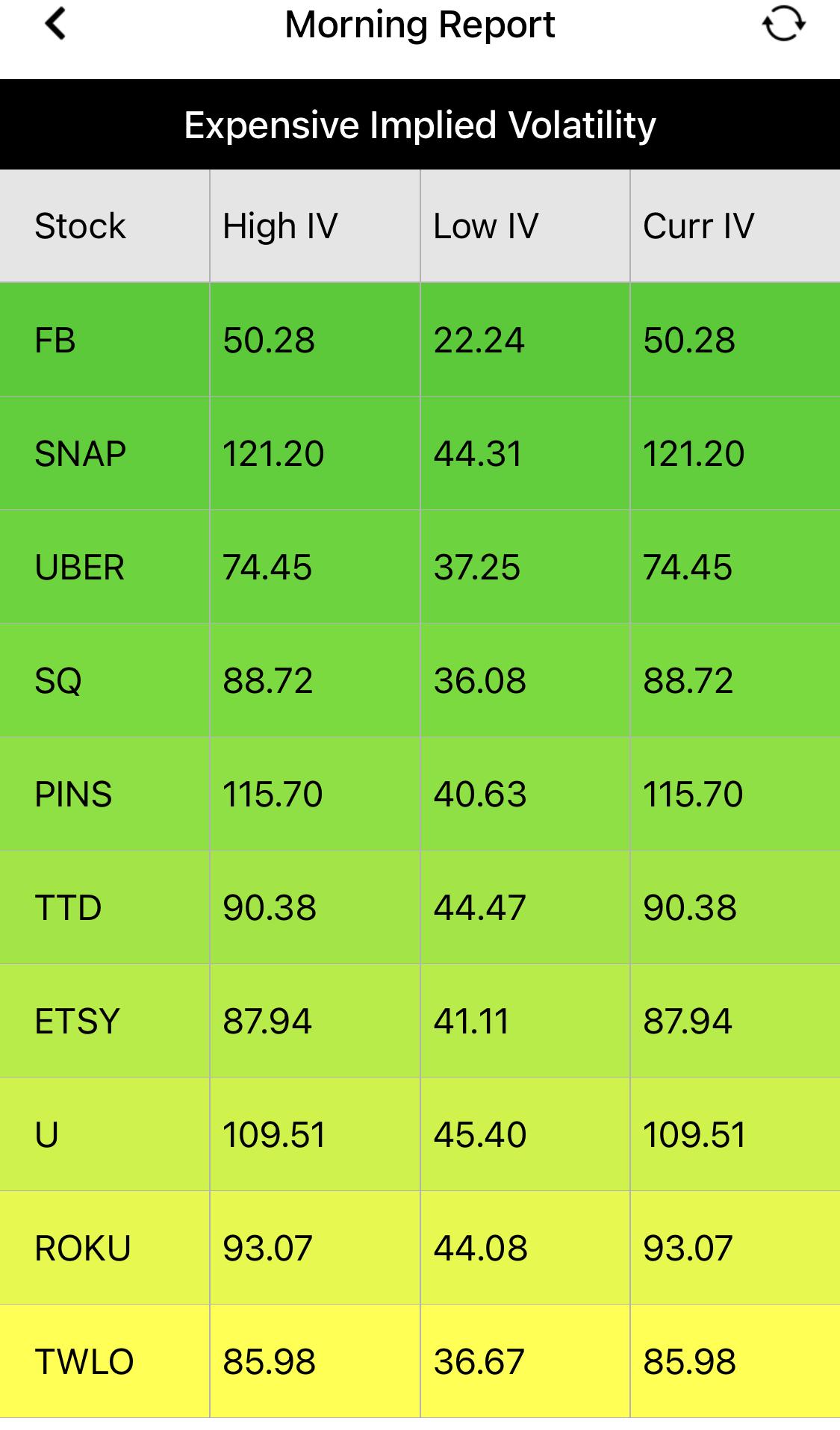 In that case, one alternative trade is the bull call spread.

With this strategy, the trader can still buy their call option on the stock or ETF, but add a twist to reduce the cost of entry and their maximum risk.

The twist is simultaneously selling to open a higher-strike call option with the same expiration date.

See, unlike tangible assets like furniture or real estate, you don’t have to be a buyer before you can sell. Options trading allows you to also be a seller out of the gate, receiving a premium that you get to keep if the stock doesn’t move into the money.

Strictly selling options – as opposed to pairing a bought and sold option – comes with its own set of risks, though, so don’t embark on that venture unless you understand the risks.

But the maximum risk on a bull call spread is limited to the initial net debit, which is the premium paid for the bought call minus the premium received for the sold call option.

The goal of a bull call spread is still for the underlying shares to move higher – but the sold leg of the trade caps your maximum potential reward, should the equity move above BOTH strikes by expiration.

That’s compared to the maximum potential reward on a vanilla call option, which is theoretically unlimited, as there’s no ceiling to how high a stock can rally.

On the flip side, a put option gives you the right – not the obligation – to SELL 100 shares of an underlying stock at the strike price before expiration. 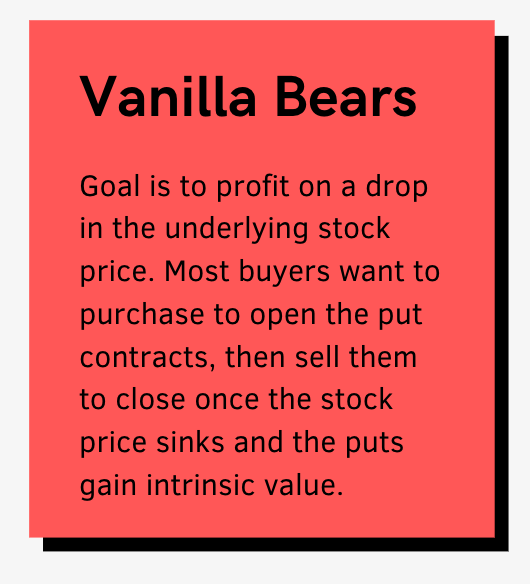 If the underlying shares move below the strike price before expiration, the put is ITM and the buyer can choose to either sell the option to close for a profit, or exercise that option.

Should they exercise the put, they can offload 100 shares of that stock or ETF at the strike price, which would be like selling your house for more than the listing price (compared to what you’d sell it for on the Street).

In simpler terms, buying a put is bearish; the lower the stock moves south of the strike, the more money the buyer stands to make.

Take Ford Motor (F), for instance – one of the two Surge Strike winners we cashed in on Thursday.

On Tuesday, Feb. 1, my BRUTUS tool helped identify a potential bearish trade on Ford ahead of earnings (which were reported last night), and we told members to purchase $20-strike put options expiring today (Feb. 4). 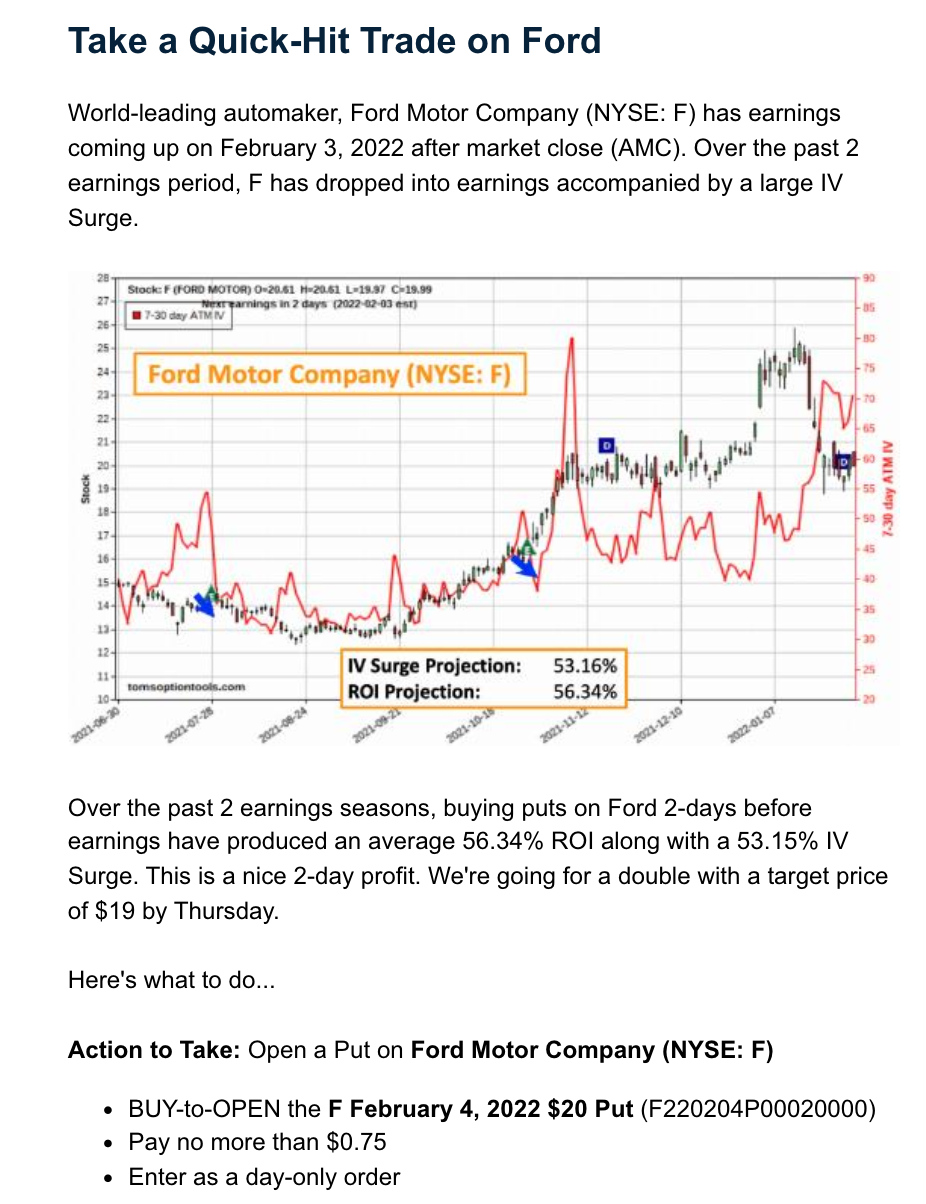 As stocks tanked yesterday, and as F IV heightened ahead of the known event, we sold to close those bearish bets for a profit.

But just like bullish bets, bearish bets can also be tweaked to minimize risk and cost of entry: it’s called a bear put spread.

With this strategy, the trader can still buy their put option on the stock or ETF, but simultaneously sell to open a lower-strike put option with the same expiration date.

The goal of a bear put spread is still for the underlying shares to move lower – but the sold leg of the trade caps your maximum potential reward, should the equity move below BOTH put strikes by expiration.

If the stock moves higher in the options’ lifetime, the most the spread trader can lose is the initial net debit for the two-legged play.

That’s all for now, Power Profit Traders, but trust me – that’s just the tip of the iceberg!

There are dozens of other ways to manipulate options depending on your expectations for the underlying shares and personal risk appetite, some of which we’ll touch on next week during my 11:30 a.m. ET LIVE trading sessions.

In fact, next week I’ll dive into a strategy we use in Operation Surge Strike that allows us to profit no matter which way the pendulum swings on the charts – and it’s a must-have weapon in your arsenal during earnings season.