If you missed yesterday’s LIVE trading session, not to worry – you can catch all my replays right here.

I went over some retailer earnings on my radar this week, and today I’ll take a closer look at UPS (UPS) stock and why it made my watchlist this week. I’ll also be taking your chart requests and questions, so hop in the chat!

If you haven’t been paying attention, Brutus is the proprietary software I use to hunt trades in Operation Surge Strike, and to say we’ve been crushing it in 2022 would be an understatement.

Because the beauty of Brutus isn’t all in the technology – it’s also in the diversity of possible positions.

We’ve banked on bullish options trades, bearish options positions, and even that almighty directionless trade – the straddle strategy we discussed earlier this week.

No matter what the market brings or how a stock is trading, there’s a page in the options playbook to take advantage…

And considering the market volatility we’ve seen so far in 2022, you need to be armed with as many strategies as possible. Otherwise, you’ll end up getting shred to smithereens or sitting on the sideline scared.

With the right knowledge, tools, and guidance, though, a little market turmoil can be music to your ears – just ask my Surge Strike family, not to mention my Money Morning LIVE cohort Garrett Baldwin, who will be discussing ways to profit from inflation and other economic speed bumps at his World’s Biggest Trade event at 8 p.m. ET TONIGHT.

So today, I want to show you how Brutus spotted GPN to begin with, the options play we initiated and why, and how we exploit rising option prices going into an earnings report.

Last week, we discussed the basics of call and put buying.

I told you that “vanilla” put buyers are bearish – they expect the stock to move below the option strike before the contract expires.

However, as an option buyer of any kind, you wanna get in at the right price – no one likes to overpay for things.

That’s why it can be dangerous to buy options too close to an earnings release, when implied volatility (IV) is at its highest due to a known catalyst on the radar.

When people know a stock could make a major move on the charts, they’re more willing to pay up for the corresponding options, and IV – and option prices – go higher.

However, my Brutus software is designed to CAPITALIZE on that pre-event IV surge.

On Wednesday, Feb. 2, the Surge Strike alarms were sounding over GPN.

Global Payments was slated to report earnings on Feb. 10 – just over a week later – and Brutus noted the shares tended to move lower into earnings.

Even better, IV tended to skyrocket – and we were here to strike BEFORE the iron got hot. 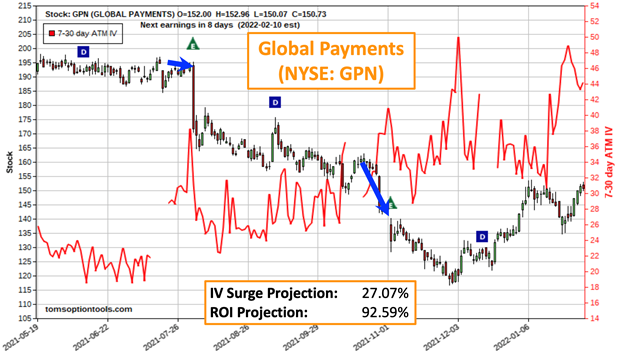 It got even more specific than that, though.

The data told us that over the past two earnings seasons, buying put options on GPN eight days ahead of earnings had produced an average 92.59% return!

And a lot of that was due to the average 27.07% uptick in IV, which boosted option prices.

In other words, Brutus told Surge Strike traders when to buy low and sell high.

And whatta ya know… It didn’t even take eight days! 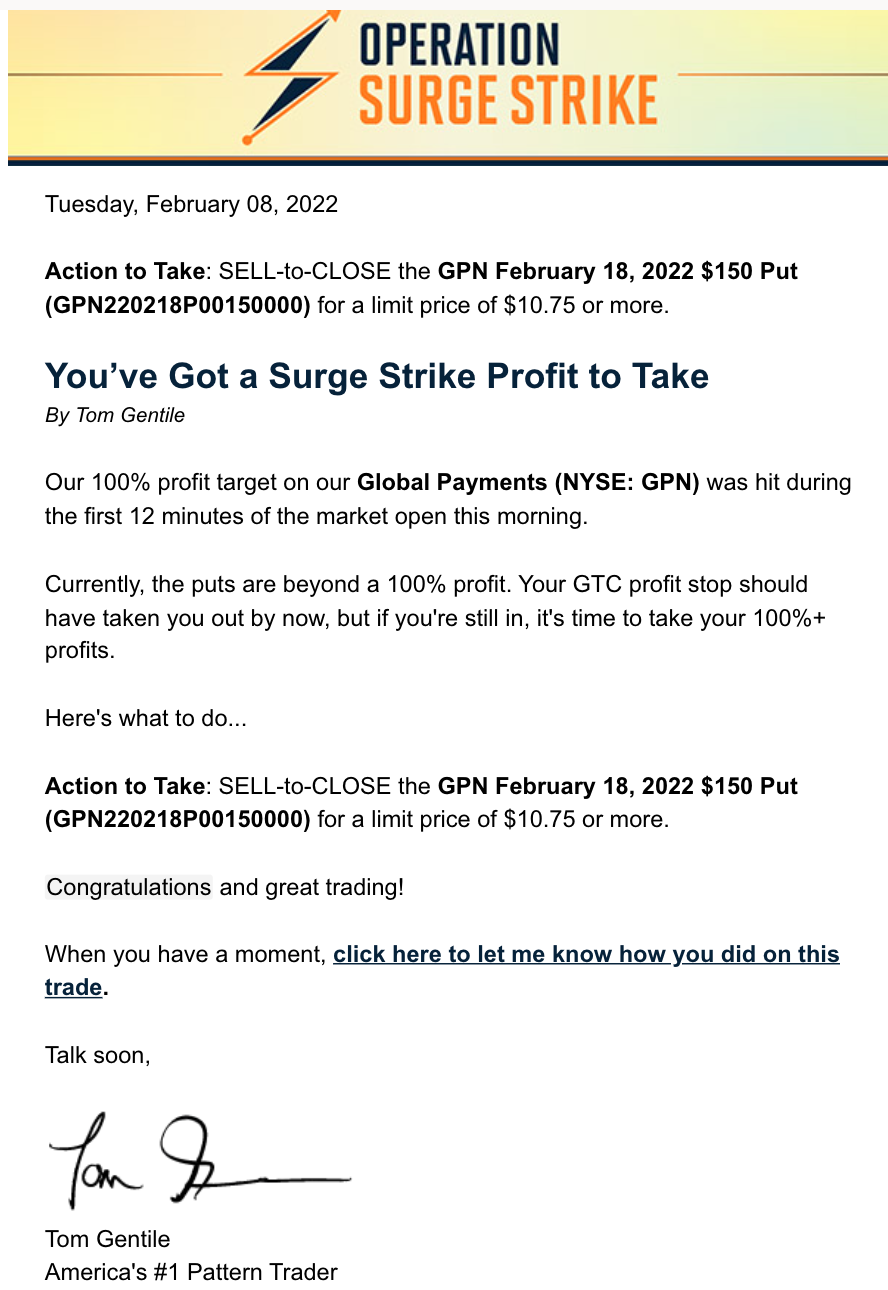 And with IV on the rise, the added extrinsic value had those same puts fetching nearly $11 yesterday morning.

In closing, I’ll continue to discuss ways to not just survive this market rollercoaster ride, but to profit from it, so make sure you catch my Power Profit Trades LIVE sessions at 11:30 a.m. ET today!

And don’t forget to circle back at 8 p.m. ET tonight, when my buddy Garrett “I have 17 degrees” Baldwin takes the stage to discuss the World’s Biggest Trade. You gotta be there!