U.S. markets are closed for Presidents’ Day today, so I thought I’d take a minute to review what a fantastic month of trading it’s been so far inside the Tom Gentile world.

We’ve been talking a lot about a few strategies, in particular, that I use in Operation Surge Strike, and I want to show you how well they’ve been working amidst the market turmoil.

See, it’s important during times of volatility – like NOW – to have an array of option plays in your arsenal, so you can profit no matter what the market is doing.

And today I’ll show you FOUR WAYS my Surge Strike traders banked so far in February, even as the major market indexes took a hit.

Of course, they can’t be – and aren’t – ALL winners, but my proprietary BRUTUS technology has certainly been working more often than not, and essentially takes the guesswork out of these trades by providing ideal entry and exit points, as well as specific option strikes.

That said, let’s jump right in…

Betting Bullishly Into an IV Spike

On Feb. 9, BRUTUS alerted us to a potential bullish trade on petroleum and chemicals concern Albemarle (ALB) ahead of earnings on Feb. 16.

Over the past two earnings periods, ALB had risen on the charts, accompanied by an implied volatility (IV) surge. 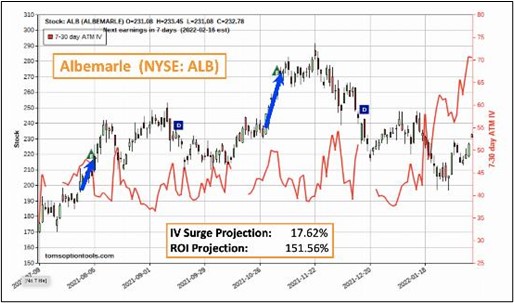 Our Surge Strike technology told us to consider buying to open the ALB $240-strike call option expiring Feb. 18, for no more than $10.

Unfortunately, this wound up being a non-winner, as we ultimately closed the call options around breakeven on Feb. 16, ahead of the earnings report.

However, this goes to show that breakeven is always better than a loss!

Had we held one more day through the Albemarle report, we would’ve seen ALB shares plummet from above $245 to under $200 in a single day!

And, thus, would’ve sacrificed almost all of our initial premium paid.

Betting Bullishly Into an IV Plunge

If you’re the buyer of anything, you’re usually trying to buy low and sell high. The options game is no exception.

But what if IV – and, thus, option prices – are expensive?

In those cases, we often consider taking the other side of the coin – the seller’s side – sometimes in the form of a spread.

On Jan. 18, LVS stock gapped higher on a massive volume and IV surge, after regulators in Macau provided clarity on casino regulations – earning LVS a bonus upgrade at JPMorgan Chase. 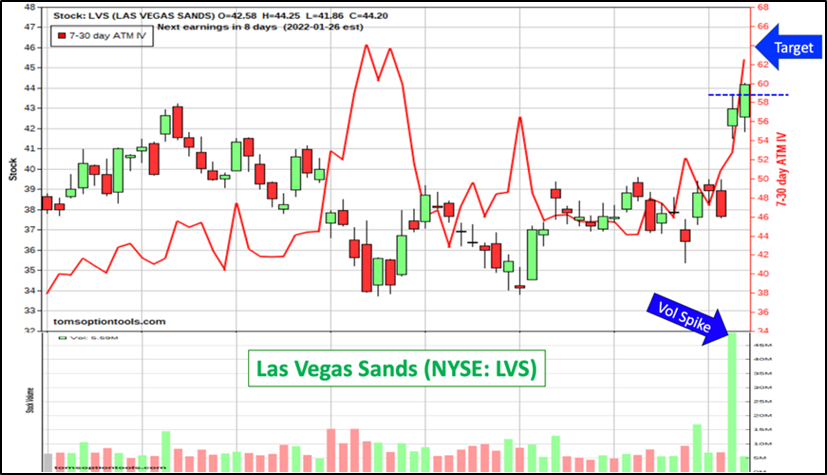 LVS options were too expensive to justify buying calls outright, so Surge Strike members were alerted to an opportunity to put on a bull put spread.

Specifically, amid expectations for the stock to head modestly higher, we:

Since the premium received from the sold leg of the spread exceeded the premium paid for the bought leg, it was opened for a net credit (we recommended collecting at least $1.10 for the pair).

Fast-forward to Feb. 3 – the day before options expiration – and it was time to lock in our gains.

We recommended closing the spread for a limit price of $0.60, meaning we got to pocket more than half of the initial net credit… all because our two puts stayed out of the money.

Of course, amidst the market turmoil, many traders are anxious for a bearish options strategy, and it doesn’t get more fundamental than the long put option.

On Feb. 2, Global Payments (GPN) fit the bill, popping up on our Surge Strike list ahead of earnings on Feb. 10.

The stock historically moved lower into earnings, while IV ran higher, making it ripe for a pre-earnings put purchase. 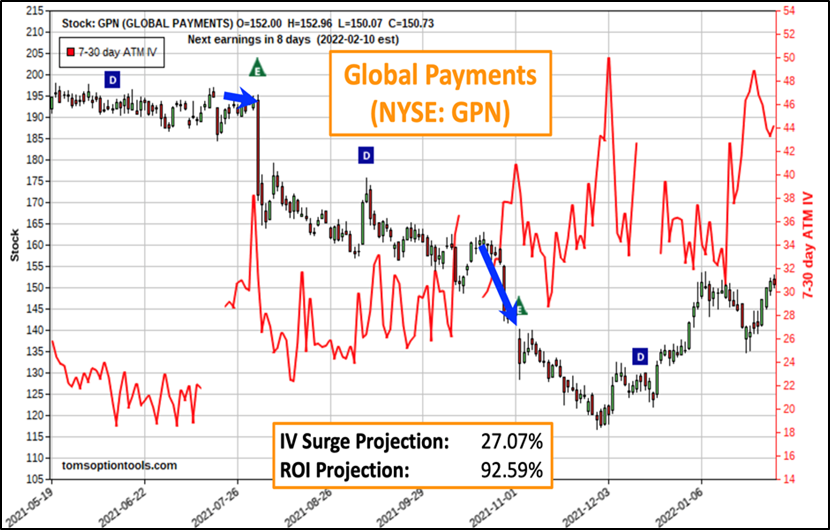 Historically, buying puts on GPN eight days ahead of earnings produced an average return of nearly 93%, and BRUTUS told us to buy the $150-strike puts expiring Feb. 18 for no more than $6.

Not a week later, our GPN puts surpassed the average return of 93%, hitting a 100% profit target within the first 12 minutes of the session!

Finally, we’ve recently hammered home the benefits of having the long straddle in your back pocket, but let me reiterate why with an example from fintech stock Affirm Holdings (AFRM).

On Jan. 21, my Surge Strike tools indicated AFRM was ripe for a straddle play ahead of earnings on Feb. 10.

This essentially meant we wanted to ride the usual IV incline into the report, but didn’t want to pick a direction for the stock, considering the pendulum historically swung both ways for AFRM after earnings.

Plus, BRUTUS told us AFRM straddles into the last two earnings produced an average return of 92.5%!

To mitigate directional risk, we:

On Feb. 10, before the company’s earnings report, we took profits off the table, closing our straddles for a healthy profit!

The call options were deep in the money at the time, more than offsetting the losses from our out-of-the-money put options.

That’s it for now, Power Profit Traders, but hopefully this goes to show that with the right education, tools, and strategies in your pocket, there’s a way to profit in any market environment.

Also, just a friendly reminder that we won’t be having our usual 11:30 a.m. ET LIVE sessions this week, but look for me in your inbox nonetheless!