Let’s hope February is better for the markets than January…

But even if it’s not, if you have the right guidance and strategies in your holster, there are plenty of opportunities to not only survive, but PROFIT from these wild swings.

That’s why I am dedicating today’s Power Profit Trades LIVE session – at 11:30 a.m. ET right here – to the options strategy that’s been working best for me in this particular market.

It’s based on a system that is designed to capitalize on rising volatility – which makes it perfect for not only this market environment, but earnings season in general.

So at 11:30 a.m., I’ll go over some of the major FAANG earnings coming up this week, and I’ll explain how option buyers can use rising implied volatility (IV) to their advantage, like I do with my Operation Surge Strike trades.

I’ll also take your questions via chat, and I’ll give you my favorite trade setup for the day – all right here, LIVE.

For those of you new to the game, in today’s Power Profit Trades newsletter, I want to get back to basics with a review of all things IV – what it is, and most importantly, how to make money with an eye on this tool.

It’s the basis for a couple of my Morning Report lists, in fact, including today’s Power Profit Trades Watchlist…

In fact, I’ll show you a real-life example of how I used my proprietary trading tools to capitalize on rising IV – and double my money on an Uber Technologies (UBER) trade in less than three days.

Implied volatility (IV) essentially measures the volatility expectations for a particular stock, and is a major component in option prices. The higher the IV, the more expensive the option, all other things being equal.

IV tends to increase ahead of a known event like earnings; traders are willing to pay higher prices for options, because there’s a chance the stock could swing in their favor after the report.

Today’s Power Profit Trades Watchlist is brought to you by the Cheap IV list from the TG Suite app’s free Morning Report tool.

This data is updated after the closing bell each session, and compares current IV against a set of near-the-money options over the last year.

Cheap IV means the current IV is at the low end of this 52-week range, meaning option premiums are relatively inexpensive at the moment, compared to the past year.

It should also be noted that I compare IV to IV to get an apples-to-apples comparison, compared to many other data sets, which compare IV to historical volatility (HV). 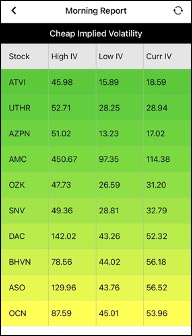 On the other hand, IV deflates dramatically after earnings, in what’s known as a “volatility crush.”

It’s similar to the old stock market adage “Buy the rumor, sell the news” – once the FACTS are out (or earnings, in this case), the news (and appetite to speculate) loses its luster.

Therefore, I’m not a big believer in buying and holding an option through an earnings report – but there are ways to capitalize on an expected IV increase as an option buyer…

On Thursday, Jan. 20, Operation Surge Strike members were alerted to an opportunity we spotted in Uber Technologies (UBER) ahead of earnings.

There were two things we noticed about UBER around earnings: 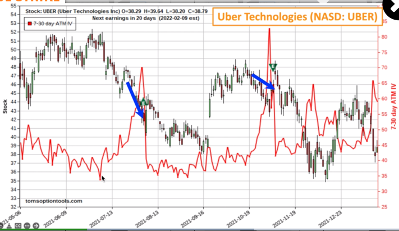 We considered this a one-two punch, and expected IV to surge roughly 297% heading into Uber Technologies’ next earnings release.

In order to capitalize on an expected downturn in UBER shares and the rising IV, we recommended buying to open the $39-strike put options expiring Feb. 11 – about three weeks out, from the time of the trade – for no more than $2.75 apiece. 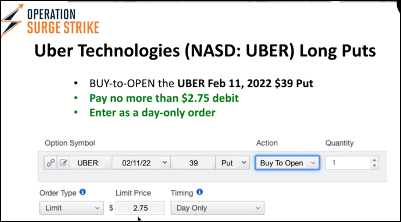 Well, it didn’t take long for history to repeat.

On Monday, Jan. 24 – just a couple sessions later – UBER gave us our second Operation Surge Strike profit of the day.

As UBER stock tanked and IV exploded, our long $39-strike puts MORE THAN DOUBLED in value, and we suggested members cash in for a 125% profit.

Ladies and gentlemen, that’s just one of the ways my Operation Surge Strike capitalizes on higher IV and pre-earnings momentum.

Outside of buying calls or puts outright – but never holding them THROUGH earnings – we also employ strategies like the bull call spread, bear put spread, and even straddles, just depending on the stock and IV backdrop.

The point is, as long as you have the right guidance and tools at your disposal, there’s a way to profit from any market environment… including the current chop.

That’s all for now, but come watch me put this into action at 11:30 a.m. ET in today’s Power Profit Trades LIVE trading hour!