If you missed yesterday’s LIVE session, it was a special one – and not just for the “mouth breathing” jokes about my in-laws.

I discussed why we can no longer blame market volatility on Covid, how I think the Fed will factor into stocks in 2022, and the similarities I see between the IPO and housing markets right now.

We also did a Strategy Review using the Ford Motor (F) call options that recently doubled for my Operation Surge Strike members in a matter of days.

That option idea was generated by my proprietary trading system, which was literally designed to profit from volatility – it’s called BRUTUS.

No, not THAT Brutus.


BRUTUS is an algorithm I came up with around the Robinhood Revolution – that influx of new traders that fueled the “meme stock” craze last year.

It’s a system designed to flag potential speculative surges – short-term rallies, in simpler terms – around “trigger events,” BEFORE they occur…

And today, I’ll explain how BRUTUS works, how it’s been generating some BIG-TIME wins for my Surge Strike team, and how both beginner and advanced option traders can utilize this tool.

First of all, I am a pattern trader – I don’t like to trade on emotion, because trading on emotion doesn’t work for me.

And I’m guessing it probably doesn’t work for you, either.

I’m always hunting for time-tested PATTERNS, because the proof is in the pudding, right?

That said, BRUTUS was built to flag what I call three “trigger events” for my Operation Surge Strike team, based on historical price data and patterns: 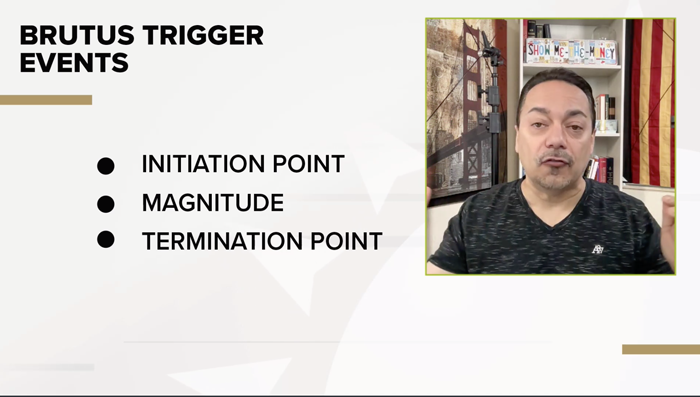 The “initiation point” is where we might want to jump into a trade around an event – like earnings, for instance.

Remember: We’re looking to trade in front of the crowd, not with it, and get ahead of a wave of buyers.

The initiation point also tells us where the “sweet spot” of the surge might be, leading into the event.

The “magnitude” is just what it sounds like – it’s predicting the magnitude of the expected move.

BRUTUS looks at past events and averages out the reactions, to see where the underlying stock might go next time.

Finally, the “termination point” tells us when the ideal exit might be; we wanna be getting out when everyone else is climbing in.

Now, BRUTUS looks at tons of events on about 3,000 companies, so it’s a lot of data, but we are looking for ONLY the best trade opportunities.

That means a 75% or higher historical win rate and only the biggest, baddest “positive surges.”

But where BRUTUS REALLY separates itself from the pack is that it’s backtesting andhunting OPTIONS opportunities, not just stocks that made a MACD signal or something.

That’s how we were able to capitalize on those Uber Technologies (UBER) and Ford calls in Operation Surge Strike, for instance.

Of course, my Surge Strike members aren’t only trading long calls – sometimes the situation calls for a more advanced strategy, like a bull call spread, which is something I teach in my regular, private sessions for premium subscribers.

We also put on trades designed to capitalize on both rising and falling implied volatility (IV), and on stocks headed both higher and lower.

It’s truly a system made for any market, and any kind of options trader.

To hear more about how my BRUTUS system works, check out the entire replay of yesterday’s Power Profit Trades LIVE session right here – I break down the F trade right around the 30-minute marker.

And to enjoy the fruits of my scanning, of course, I’d love to have you join the Operation Surge Strike team!

There’s no better time than right now to have BRUTUS on your side, with trigger events like earnings reports out the wazoo and all of this juicy volatility…

That’s all for today, but I’ll talk to you again tomorrow!