Finding the market bottom is a super emotionally-charged quest – all traders want to time it perfectly, and if they’re right, they can make a fortune.

In the spring of 2008, the S&P 500 charged higher after falling nearly 20% in the preceding months – traders that guessed the market had bottomed got hammered with a 45% market fallout in the months following.

There’s plenty of money to be made if you’re patient enough to follow signs that the market has bottomed instead of worrying about nailing the exact point.

It’s easy to get emotionally concerned you’ll miss out if you don’t time your investments just right, but it’s nearly impossible to nail it perfectly…

However, with patience, you’ll be better positioned to profit off the bull run that follows – which almost always rewards you with greater returns than you’d get off the initial bounce.

So, instead of attempting your luck at winning the market bottom lottery ticket, let’s focus on indications that the market has not bottomed, and then look at how you can profit between now and then.

Let’s look at five telling indications the market has not bottomed.

Although there are more than what I’ve listed here, let’s consider five things that should be experienced before the market finds a floor.

Unemployment will rise as the economy enters into a recession.

Rising unemployment goes hand in glove with recessions, which means that before the economy and market begin to recover, people will first fear for their jobs, but the reality will then settle as some do lose their incomes.

You will hear the layoff announcements first, followed by actual numbers in the monthly reports.

The market has fallen quite a bit already this year, but let’s take a look at where we stand with the unemployment rate in America.

From the graph below, you’ll find the unemployment rate has fallen from January’s 4% to a fairly steady 3.5%-3.7% since March – this is despite all of the talk we’ve heard this year about the imminent recession. 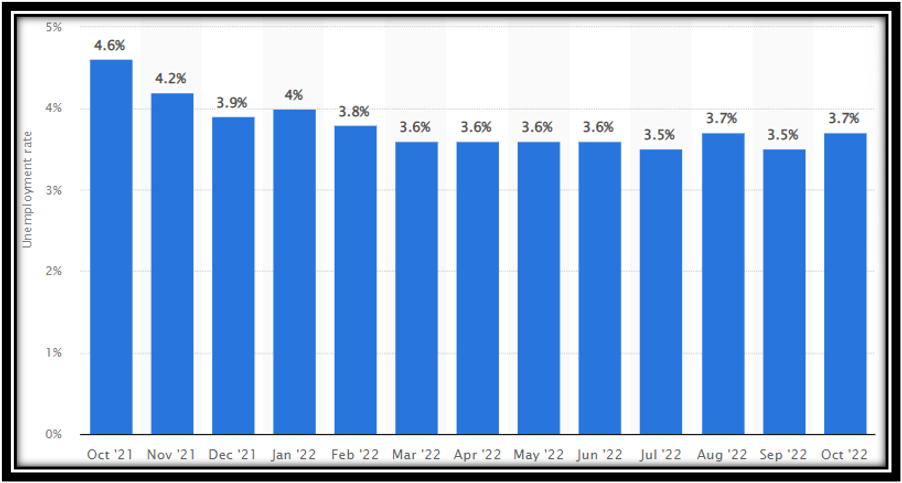 Now the stock market is a leading indicator, so we’ll see market prices drop ahead of the reported unemployment numbers, but you should hear plenty of media chatter about upcoming layoffs, which is what the market responds to.

Fed action can crush an economy.

The Fed’s objective is to crush inflation, but as long as unemployment is low and consumers are spending, the interest rate increases we’ve seen will not accomplish their objectives.

So far, we’ve seen the greatest impact of interest rate hikes on credit cards and mortgage rates, not on employment.

And, we haven’t seen the demand for consumer goods dropping significantly. Part of the reason is due to the production issues coming from overseas, especially China, but consumers will often buy on credit when they don’t have the cash, so spending dwindles and then stops once credit is maxed out.

The third and fourth items we should witness before the market finds a floor go hand in hand – corporate valuations and insider buying.

As the economy grows and stock prices increase, so do company valuations. Then, as the Fed tightens monetary policy, growth is hampered, which leads to lead to cost cutting, lower sales and revenues and falling valuations.

This lets us know that companies are feeling the pinch and they’re compensating for it – which is something that contributes to market decline.

As valuations and downward revisions occur, we’ll want to observe what the insiders are doing with their stock as well.

It’s lowered company valuations that entice insiders to start buying shares of their own stock.

You won’t find anyone who knows the inside of a company better than CFOs and CEOs, so once they’ve recognized that their stock is trading at a value, and they believe the worst is behind them, you’ll see insiders change over from net selling to net buying.

The illustration below gives us a little sense of what’s happening in the insider buying/selling world just this past week. 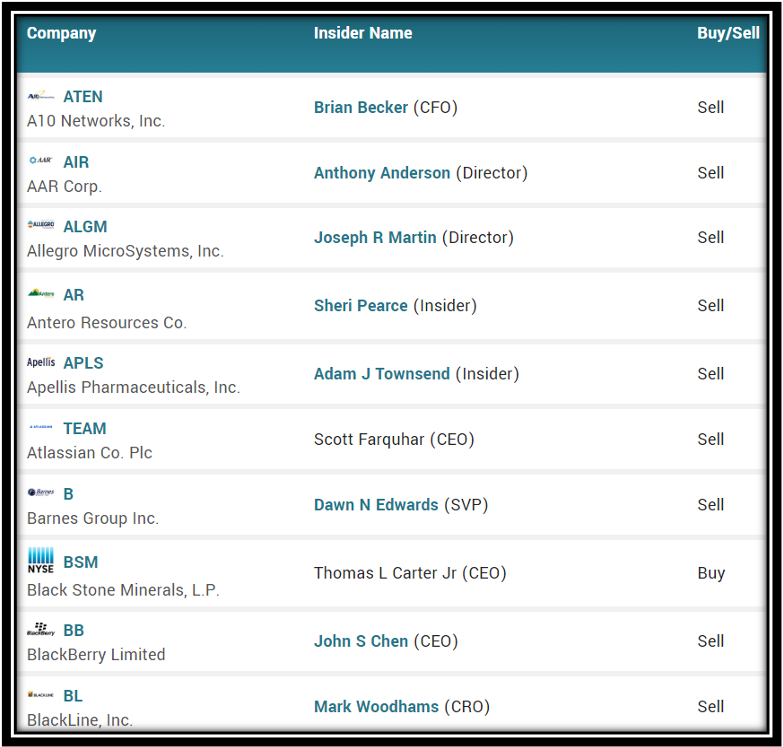 Although it’s not a complete list, the first 10 companies listed indicate 9 out of 10 company insiders are selling instead of buying.

We won’t likely see a market bottom until we see a change in insider’s outlook for the company – which will be illustrated by insider buying.

Investor capitulation will send volatility “through the roof.”

The last item I’ll look at to help indicate if the market has found its floor is volatility.

Oftentimes the market will experience a “capitulation” before it has found a floor. This occurs as fear builds so high that investors finally give up – then dump investments by the truckload.

Recognizing capitulation can give you an edge, because it’s an indication the market is near its floor.

One of the easier ways to identify capitulation is when the “fear index” (VIX) rises to extreme levels.

In the image above, the VIX has held a steady ceiling this year despite the market decline we saw earlier. It has peaked near 35, but when capitulation occurs in the market, we’ll expect the VIX to move well above this level.

As we contemplate the items above, it’s apparent that plenty much more can happen before the market finds its floor – which is its turning point.

Between now and then we’ll likely hear a lot of noise in the news and see speculators attempting their luck at betting on the bottom – but this can be costly.

Instead of getting caught up in world of anticipators, let’s simply take advantage of the opportunities that present themselves along the way.

There are plenty of trading opportunities provided by the market as it works its way to its bottom.

Whether I’m using options to generate income or trading short-term market movements, you’ll hear me talk about strategies each week in my Money Morning Live sessions.

I hope to see you there.