Since October the S&P 500 has recovered over 15% of losses sustained last year, which looks promising on the surface; and, it included heavier trading volumes – a sign of strength.

Although the market may look promising at the moment, officials at the World Bank have explained “the worst is yet to come.”

The global economy is slowing significantly, which will inevitably translate into fewer jobs, fewer opportunities and increased poverty – in a world where 47% of the world population lives on $7 per day, or less, as it stands.

Well, we don’t need to look very far to realize the fundamentals of our current economic conditions have not changed over the past month despite the market rising nearly 15% off the lows of 2022.

The market has had some strong movements throughout the past 12 months – both up and down.

And the bullish moves are lasting long enough to convince traders that the worst is behind them, only to be followed by bearish movements causing emotions to run high – resulting in losing trades and poor decision making.

There is a solution, however.

It’s my policy to be aware of what’s happening around me in the world in order to explain some of the market’s behavior, but also to follow a rules-based trading approach to avoid making mistakes and losing money during uncertain and volatile times.

So, let’s talk about ironing out the emotions involved in trading and the ripple effects caused by confusing news headlines and market swings.

There are plenty of things happening around the globe to help me understand why market volatility and trader’s emotions run high.

The ripple effect of rising energy and food costs are impacting the world, not just the U.S.

Economies in the world are more interconnected now than they ever have been. So, when any developed region experiences economic issues, the ripple effects can be felt far and wide.

Consider the U.S. Dollar for example which rose continually between March and September last year. A strong dollar makes it more expensive for people to invest in the U.S. because their currency won’t buy them as much.

Additionally, although they’re loosening up on policy, China’s zero-covid crack down created lock downs which negatively impacted product manufacturing. It’s another reason why we’ve experienced delays in products arriving in the U.S. along with shortages – driving prices higher as a ripple effect.

And, many European countries have long depended on heating oil from Russia, which has been cut off due to sanctions – creating panic and an increase in inflation across many countries.

Energy volatility due to OPEC’s manipulation can influence fuel prices, which are passed all the way down the line to consumers at the checkout stand – hello inflation.

People were generally happy about our last two inflation reports despite the fact that they’re still indicating high levels of inflation. The market has responded positively to them.

Federal Reserve Chairman, Powell, is cognizant that employment in the U.S. must suffer to rein in inflation.

Our unemployment rate has remained near 3.5% for a lot of this year, but it’s expected to rise above 5% by some estimates by next year – which means millions of unsuspecting Americans are yet to lose their jobs.

With the global inflation rate anticipated to peak near 8.8% by year end, it is expected to remain elevated for longer than some expect.

Additionally, the IMF has forecasted global economic growth to dwindle from 3.2% in 2022 to 2.7% in 2023 – with 33% of economies expected to experience recessionary contraction.

With all the interwoven ripple effects I’ve mentioned above, you can understand why I think it’s so important to have a non-emotional, systematic approach to trading.

If you want to use short-term trading as a way to increase savings and assist you when the market turns, you’ll want to be sure and reduce the emotions of trading.

That’s where systematic trading plays a role – it’s one of the best ways to reduce emotions from trading.

I learned my lesson the hard way when I first started trading options back in the ’80’s.

And I’ll tell you, I had to take some time off and regroup. I realized after experiencing great loss that there must be a better, perhaps even stoic, approach to trading.

So, I listened to a mentor and my journey into rules-based trading began.

The foundation of rules-based trading

There are four simple things to include with a trading plan to make it systematic – let me share these with you.

The first part of a systematic trading plan includes using one or more technical indicators to help you understand what’s happening with the stock’s price action right now – regardless of the noise media headlines are creating.

The first two lines of code I use in my software include moving average lines – technical indicators.

Specifically, I use a 10/30 crossover, which means I look for the average stock price over 10 days to cross above or below the average price over 30 days. 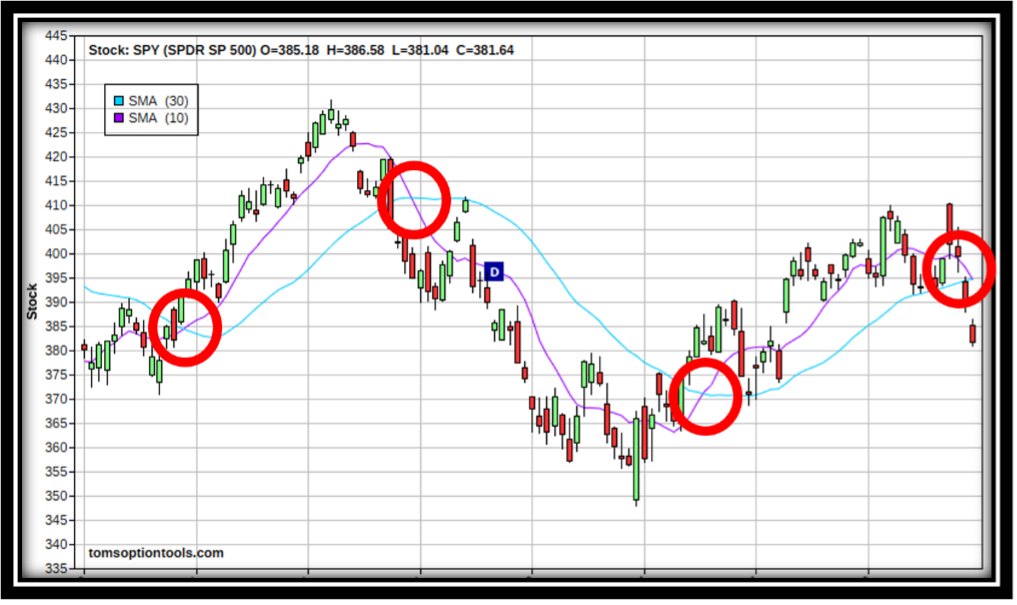 In the image above, you can see the purple line (10-day MA) crossing below the blue line (30-day MA), indicating weakness in the trend – followed by a down turn in price.

On the right side, you can see the 10-day moving average line crossing upwards, indicating bullishness to the stock.

These simple moving average lines help make trading easier – it doesn’t matter what’s happening in the news or across the world, I can simply see how the stock is behaving right now.

The second part of a systematic trading plan will include “back testing.” This simply means I’ll go back in time to see if I can repeat the process.

So, if I think the trend will change once the crossover occurs, it should repeat itself over time – and the more history I can review, the more confidence I’ll have using the technical tool.

The third part of a systematic trading plan is to forward test it – meaning put trades down on paper in real time to see if your system is working in the real world.

Once I’ve “practiced” my systematic approach to trading on paper, I’m ready to take it to the next step – go live!

So, the fourth part of a systematic trading approach involves trading it. Once my confidence in the tools is strong enough, I’m simply ready to put the trading plan to work.

Now, since I know the trading approach will work most of the time, but not 100% of the time, I’ll simply incorporate proper money management to every trade.

Proper money management is as simple as spreading my funds across multiple trades, having a profitable exit point, and an exit to minimize losses when they occur.

And, we can’t always control what’s happening in the economy or the stock market, but we can be informed in order to have at least an understanding, and then trade with confidence knowing that we’re using a systematic approach that works for us, not against us.