Elevated inflation may help offer a bump to things like social security checks, but substitution bias in the Consumer Price Index (CPI) report can hurt Americans who rent while bolstering the pockets of landlords.

Now it’s only natural to focus on headlines, but it’s when we look into the details of economic reports that we’ll get a fuller understanding.

Well, the CPI report will be revealed this week, and it will be better understood when we look a little closer at the numbers revealed and the idea of Substitution Bias.

And what is substitution bias? – it’s fairly simple… under strained economic situations consumers will substitute Spam for a higher-priced steak.

Now there are plenty of things in life that are not fun to substitute, especially if we’re talking about substituting quality for undesirable or distasteful products.

On other occasions, however, there are things worth substituting over others…

When it comes to our current market conditions, I want to share with you a strategy you might easily consider using as a substitute.

I’m talking about the vertical spread trading strategy that has trumped other strategies by 3:1 last year.

Before I get into the details, let’s talk about why we might expect similar market conditions this year as last.

Expect Volatility from Fed News and the Overstated CPI Report

We may experience extra volatility as the CPI is released this week, which may be overstated due to the substitution bias affect – which is created by consumers switching over to lower-priced products.

As consumers substitute more expensive products for cheaper ones, as a means of fighting inflation, the changes in consumption may not be reflected in the longstanding market basket the CPI is used to accounting for.

This can create an inflated CPI report – by approximately 0.5%, and since some landlords use the inflation report to gauge increases in rents, some tenants will end up having their rents raised based on an inflated reading – causing even more hardship.

Well, this just creates another reason to capitalize off the extra market volatility that is associated with uncertain economic times like these.

But there are additional reasons we might expect heightened market volatility…

The Fed is determined to crush inflation, and that means jobs will be lost in the coming months – exacerbating financial situations.

And the CPI report can stir emotions. The CPI report may indicate a decline in overall inflation, but individual items that are impactful, such as specific food items, may be on the rise – similarly to what we witnessed last year when the report showed an overall decline.

Investors can get emotionally charged by a decline in inflation based solely on the report itself, but over time, as the reality that prices are still extremely high and negatively impacting our buying power, the enthusiasm falters – and so does the stock market.

When you buy a call option, you can theoretically make unlimited profits, but with the zig-zagging market conditions we’ve dealt with last year, if your timing was off, so were profits.

Now don’t get me wrong, I trade long calls and puts regularly, but I offer subscribers a choice.

When my Quantum Scripts software identifies directional trades for my subscribers, they can take on a bullish or bearish trade using single calls or puts, which I consider high profitability trades.

Anytime we take on a long-call, bullish directional trade, profitability is maximized when the stock moves strongly and very quickly – and there are great profits from this happening.

Alternatively, when a stock’s price takes longer to rise, due to emotionally-charged zig-zag movements, the higher probability vertical spread trade captures the majority of its profit.

And while both can give single, double and even triple digit returns, let me tell you that with the choppy market we experienced last year, our Quantum high probability trades outperformed the high profitability trades by a ratio of 3:1.

You can see the comparison in the image below: 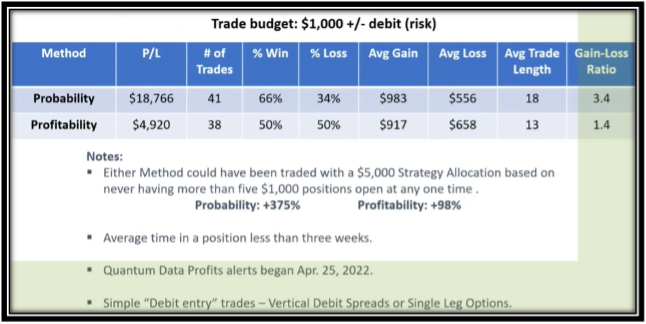 Taking on either of the trading strategies that my Quantum Scripts found for us would have outperformed the general market in 2022, so had you chosen either of them, there would be no disappointment.

But in the case of the higher probability strategy, well, it was well worth the substitution.