I’m sure I don’t have to tell you that cyber-attacks are on the rise.

Everyone is looking into how to best protect themselves and their identities.

As they should, because chances are, you or someone you know, has been affected.

But while everyone is busy protecting their identities, there are two moneymaking opportunities that no one’s talking about…

How to Protect Your Information

Now, before we get to those moneymaking opportunities, Google (GOOGL) just made an important announcement.

This is designed to make it easier for users who are at high risk of being targeted by online attacks to lock down their Google accounts.

You can see if your account is eligible right here.

There are also companies that specialize in anti-virus software designed to protect users from malware and hackers.

These include McAfee, Avast’s range of products, and Norton Anti-Virus Software by Symantec Corp. (SYMC). I’m sure you know of others. But you should look into using software like this if you haven’t already.

As for protecting your wallet, Symantec can do that, too…

How to Profit from Symantec

Symantec specializes in cyber security and they are most known for their Norton Anti-Virus Software, as you just saw.

Let’s take a look at how they’ve done so far this year: 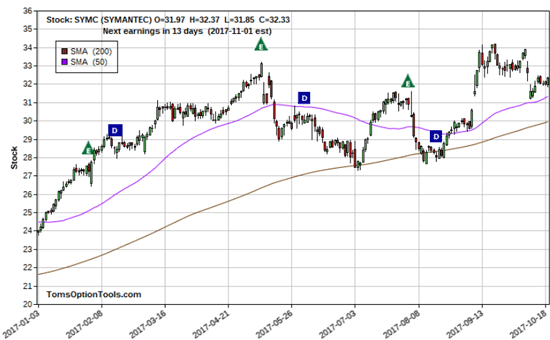 SYMC is optionable, but unless you’re waiting around for the next breaking news announcement of a security breach or high-profile hack, I wouldn’t consider this a company that provides a great deal of short-term profit opportunity.


Instead, with SYMC, I would take a longer-term approach and consider LEAPS call options as my main approach.

These would provide more time for you to make money off SYMC moving up than a regular call option (for more on LEAPS and how to use them, click here).

But there’s an even better way…

Instead of trying to find a single stock or two that will get lucky enough to be the winner from any particular cyber-attack, you can go for an exchange-traded fund (ETF) that has holdings across the whole cyber security sector.

Now, the ETF I am about to show you isn’t widely traded, likely because not many retail investors know about it.

And you won’t guess its name…

The ETF is called the PureFunds ISE Cyber Security Fund, and its ticker is (HACK) – logical and funny.

Now, there are no weekly options on HACK and only a handful of options with strike prices around the ETF’s current price.

This is in large part why it really isn’t on my radar that often.

But its price chart for this year is quite interesting: 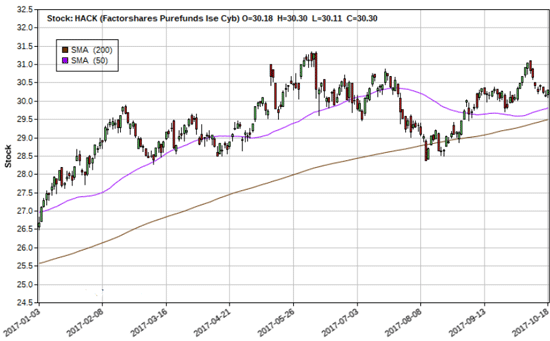 As you can see, the charts for SYMC and HACK are almost identical.

It’s just not a steep or orderly uptrend.

But both show strength as they are both trading above their 50- and 200-day simple moving averages (SMA).

Both warrant a look as longer-term trades – regardless of whether they “pop” or not in response to the next major cyber-attack.

Last time my tools alerted me to a cyber security play, a small group of my readers had the chance to walk away with 100% gains on Raytheon (RTN) in just 24 hours. Click here to find out how to join them for the next money doubling opportunity.