Yet again, Alibaba Group Holding Limited (BABA) claimed the throne of highest-grossing e-commerce sales day ever on “Singles Day,” exceeding $1 billion in just the first two minutes, $8.6 billion in the first hour, and a record-breaking $25.3 billion for the day.

And now, you’ve got an exclusive opportunity to claim your share of the cash – for pennies on the dollar.

Every November 11, single people throughout China celebrate “Singles Day” by, among other things, shopping – and a lot of it. In fact, Singles Day has come to be known as the world’s biggest online shopping day. And it should come as no surprise that the biggest winner is Alibaba Group Holding Limited (BABA) – and its record-shattering $25.3 billion in sales revenue.

Before that, BABA already beat earnings expectations, reporting $1.22 earnings per share (eps) on a $8.3 billion revenue versus consensus estimates of $1.04 eps on a $7.8 billion revenue. Additionally, BABA raised guidance for the 2018 fiscal year by nearly half a billion.

That means it’s the perfect time for you to get in on the action. And I’ve got a way for you to do it – without touching a single share of stock.

As of the time of writing, BABA is trading right around $185 per share. Now that may not seem that bad – but you’d have to be sitting on that one share for a long, long time to make some pocket change. And you’d better hope that it never falls below $185. You could always buy more shares, too, but that could get real expensive real fast. For example, you’re looking at $925 up front to buy a mere five shares of the stock. If you want 10 shares, then you’re going to need to fork out $1,850 – and hope that stock keeps moving higher.

One alternative strategy you could use is to write covered calls, which constitutes owning a stock first and then “writing” (selling) a call option against. That gives the purchaser of that option the right – but not the obligation – to buy that stock from you at a later time at a specific price. The reason it’s deemed “covered” is because you already own the stock, so the sale of that call option brings in cash that you get to keep – whether or not anyone actually ends up buying the stock.

What isn’t so nice for some, however, is having to actually OWN the stock, especially when you want to write covered calls on an expensive one like BABA, or even worse, The Priceline Group Inc. (PCLN). In order to write just one contract, you’d need to own 100 shares of the stock. That means you’d need an initial investment of $18,500 to write one covered call on BABA.

Now you’re either reading that number and not batting an eye or you’ve decided this is well beyond what you’re willing to spend – especially this time of year. Fear not… there’s a reprieve strategy out there for you.

And it’s called “time spread.” This is also known as a “calendar spread,” as it doesn’t necessarily deal with two options with different strike prices on one order, but instead involves two options with different calendar expiration dates (the strike prices can be the same or slightly different). You’d buy-to-open an option with an expiration out at a specific date of your choice. Then, you’d write (or sell) an option with the same strike price normally, but you wouldn’t have to use a shorter expiration date.

Keep in mind that this strategy is similar to writing covered calls in that you’re using the longer-term option as a proxy for the stock. You’re still selling a call option, but you’re selling it against another longer-term option on that stock.

But with the time spread, you’re offsetting the cost of $893 by selling-to-open that shorter-term call option for $710. That brings your risk in the trade down to only $18 – significantly less than that of purchasing the stock.

Take a look at the risk graph for this setup, as provided by my proprietary tools: 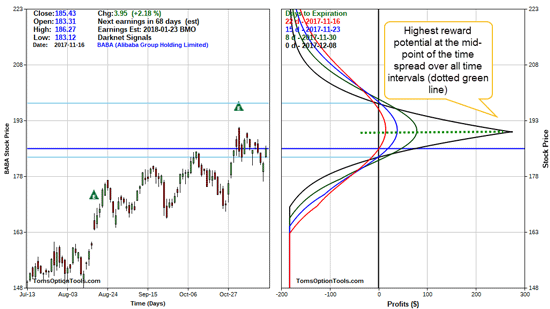 So long as BABA stays in the mouth, then you’re looking at a great chance for taking profits. In fact, this trade example has the most profitability if it moves up slightly to the price of the option you sold, which is the $190 price.

In fact, last time I recommended a trade on BABA, a small group of readers had the chance to score 106.2% gains in just THREE days (click here to find out how).

Now you’re obviously not going to make as much with more shares and more contracts in play, but you get a bigger bang for your buck. On top of that, it’s tough to cover the cost of your stock purchase in as short a time you may be able to using a time spread.

Here’s a couple other tips to remember:

This is yet another example of the power of options and the leverage they provide. You can participate in a stock’s price movement and potentially profit without ever having to shell out the money to buy shares of the stock outright.