Just Released: My brand-new Masterclass is now available for you to view. Learn how to see it right away by clicking here.

It’s 2020, you’re cruising down the highway with the windows down and the radio up – and your hands aren’t on the wheel. Your foot isn’t on the gas. The car is driving itself.

It’s been a race within the auto industry in recent years to see who can develop the first autonomous vehicle. Top carmakers like Tesla Inc. (NASDAQ: TSLA), Alphabet Inc. (NASDAQ: GOOGL) offshoot Waymo, and Uber have been in tight competition to see who will develop the car of the future – one that doesn’t require a human driver.

Now, most people have been watching Waymo, Google’s former project, which seemed to be at the forefront of the self-driving car race…

It’s no secret that I’m a bit biased toward Tesla Inc. (NASDAQ: TSLA). My own Model S got me and my family safely out of the path of Hurricane Irma last summer, so the car is a Gentile-family favorite. I even bought a second Tesla for my home in New Zealand, where I leave it plugged in and ready to use anytime I visit.

“All Tesla cars being produced right now have everything necessary for full self-driving. All you have to do is improve the software.”

And that software is closer than we may think. He continued, predicting:

“A year from now we’ll have over a million cars with full self-driving, software, everything.”

The biggest advancement Tesla has made toward this goal is a new chip, developed in-house, designed solely for self-driving purposes. And the company has plans beyond simply selling the autonomous cars…

It’s called the “Tesla Network.” If Tesla owners are willing to hire out their cars as “robotaxis” into the network, then they could make a predicted $30,000 a year. Now, that’s a pretty nice-sized profit for a car that costs less than $40,000 itself. Plus, the robotaxis are going to broaden the luxury car’s overall audience. With the Tesla Network, everyone is given the chance to “drive” a Tesla.

Now, this advancement is huge. It’s exactly what most people picture when they hear those mysterious words, the future. If Tesla develops the first autonomous car, then the company will go down in history – and its share prices could skyrocket.

The company is constantly hitting headlines, and Elon Musk is known for making unreliable predictions. I mean, he once claimed that Tesla would make 500,000 cars in 2018, and the eventual number ended up being half as much. On top of that, on Thursday the company delivered horrible earnings results, with revenue down 37% from last quarter. And it brought the stock down more than 11% in just one day.

I love the technology, and I have faith in the upcoming Tesla Network – but in order to sustain investors, the company needs to be profitable. And the government cut the energy credit tax twice last year, so it’s going to be tough for Tesla to turn these first quarter results around.

But here’s the thing – none of that stuff matters. Not to us, at least. Tesla is known for being volatile. This chart of the company’s price moves from 2017 to the start of this year makes that pretty clear: 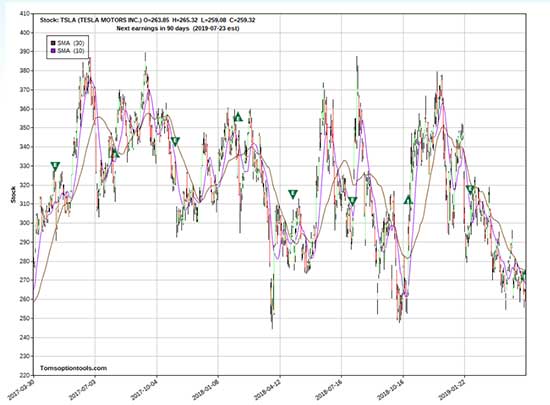 These erratic price moves aren’t going to change anytime soon. Tesla’s autonomous car prediction could cause the stock to skyrocket, or missed earnings could send it tumbling even further. But there’s one very important thing to remember…

No matter what, we still profit.

Because with options, it doesn’t matter which way the stock moves. In fact, this volatility is exactly what we want to see – it’s how we make big money.

At the start of this year, my Alpha-9 Trader readers could have taken advantage of Tesla’s wild price swings and reaped some pretty impressive benefits…

On February 28, readers could have taken home a 94.33% profit on a call spread after a nice stock jump.

Then, only two days later, Tesla’s stock tanked. So, I recommended a put spread to take 65.75%.

That’s a combined 160.08% profit over just two days – and it’s all thanks to Tesla’s volatility.

Any reader who put a small stake in these trade opportunities could now be looking at a cool $13,000.

And that’s just a very small taste of what my Alpha-9 system can churn out.

So far this year, this same group of readers have enjoyed a shot at 57 winning closeouts out of 66 trade recommendations.

Of those winning plays, 43 were double-digit wins. 14 were triple-digits wins. And I have no plans to slow down…

In fact, I’m gearing up to release my next Alpha-9 potential winner first thing Monday morning. If you want in, you need to act now.