From big-name investment companies like BlackRock and Berkshire Hathaway down to individual investors like you and me, everyone wants a piece of the tech giant…

And now might just be the best time to jump in.

You see, since September 1, Apple has shed more than 15%.

Buy low, sell high, right? That’s what they say – and Apple’s recent pullback just gave you the opportunity to do just that.

In today’s video, I’m going to show you a trade that takes that small stock move and turns it into triple-gain potential.

You can watch right here. 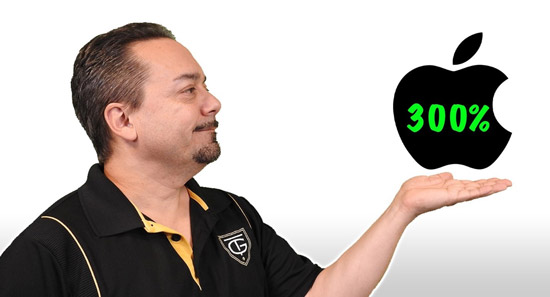 Now, Apple is one of the biggest and most well-known stocks in the world. Even better than getting in now would have been getting in back in the 1980s, when the company was first starting out.

Unfortunately, it’s too late to get into Apple before it made it big. But it’s not too late for this revolutionary engineering company…

See, this company just opened its doors to a second wave of investors – and today, you can learn how to become one of them.

This is your chance to be a fly on the wall of a confidential deal analysis meeting, learning everything we’re sharing about a company poised for unlimited profit potential.

Find all the details on this hot deal recommendation right here, inside the Private Dealroom. Your exclusive password is SEPTEMBER2020. But hurry, because the doors could start closing on this deal tomorrow at midnight.

Here’s to your success,