It’s January and you know what that means – earnings season is on.

2023 is expecting a wide-spread challenge as S&P 500 earnings growth estimates have steadily declined since mid-April, and each Fed announcement and economic report should be highly anticipated by investors who are holding their breath for positive news.

But, as each announcement creates more uncertainty or hints to a deeper recession than anticipated, we can count on much more MARKET CHOP ahead.

Market chop can be frustrating on some levels because right when you think the market has found its direction… BAMM! it does an about face and moves opposite just as aggressively.

What it spells for me, though, is opportunity.

Let’s talk about what’s likely going to cause extra market chop this year, but more importantly how I’m going to profit from it.

Unemployment fell to pre Covid-19 levels at 3.5% in the latest report, and for many that’s a great sign of relief.

From the Fed’s perspective, however, it’s a game of tug-of-war and they’re losing because last year’s interest rate hikes were supposed to tighten belt straps at the cost of lost jobs.

Well, it’s not over yet. There will be more rate hikes this year and mega companies like Amazon have announced that upcoming layoffs will be significantly larger than originally anticipated.

And let’s not forget that job losses typically lag behind interest rate adjustments.

But the tug-of-war between Fed rate hikes and unemployment can easily lead to extra market volatility, not to mention volatility caused by downward earnings revisions.

S&P 500 Earnings Expected to be Disappointing

It’s quite evident our economy is creeping closer to a recession and corporate earnings revisions are dampening our happy new year.

As I looked at the effect on major market sectors, some of the hardest hit in downward revisions include Construction (-29%) and Consumer Discretionary (-21.5%).

But, it’s precisely earnings revisions that will play a role in tradeable opportunities throughout this year.

Let’s look at some of the volatility we experienced last year when – when earnings weren’t as disappointing.

The chart below illustrates market chop as prices struggle to find direction. 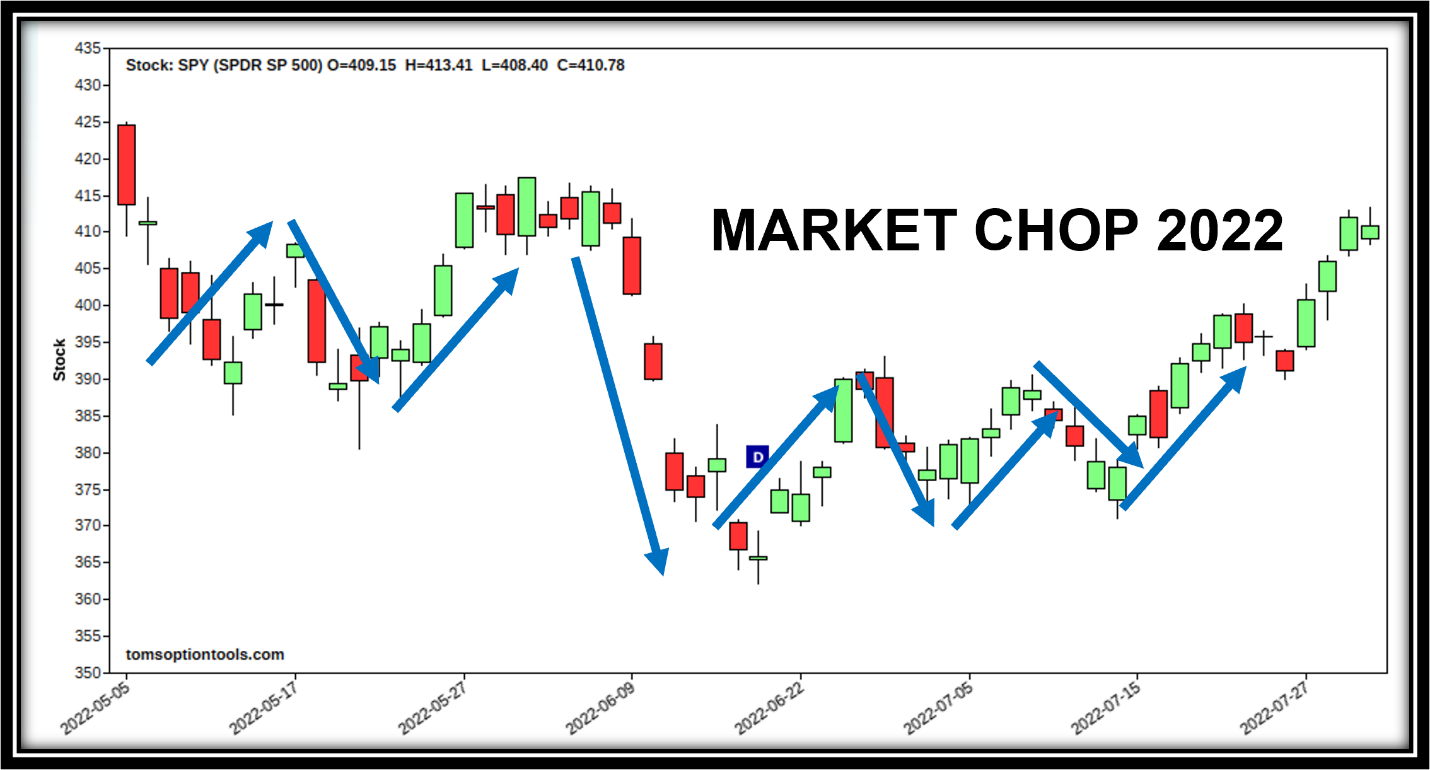 It may not have been earnings that caused the volatility, but inflation and rates contributed to the market ranging 5- to 10-percent between peaks and troughs – all in a matter of days.

The Benefit of Trading Straddles

Option Straddle trades are capable of making money regardless of which direction the market moves and I’ve been using them for years.

But I’m getting ahead of myself. Let me first explain what a straddle trade is.

Really, though, there are two things that can happen for straddles to profit – large stock movement and an increase in implied volatility.

But here’s the thing – it doesn’t matter which direction the stock moves so long as it moves enough to compensate for the cost of the combined call and put. Then, to assist in the maximum benefit of the straddle trade, implied volatility should rise.

Well, I mentioned above that volatility is expected to be higher this year as earnings estimates decline, the Fed increases rates and unemployment catches up with the times – which can easily contribute to large price fluctuations.

And, right before companies report their earnings, implied volatility increases – by triple digits in many cases.

So, there you have it. With economic uncertainty, the real potential for unemployment to increase along with earnings revisions and rate hikes, the market is primed for bolstering the profit potential of straddle trades.

So be sure to join me in the discussions as I identify trading opportunities throughout this year. I expect there will be plenty to choose from.